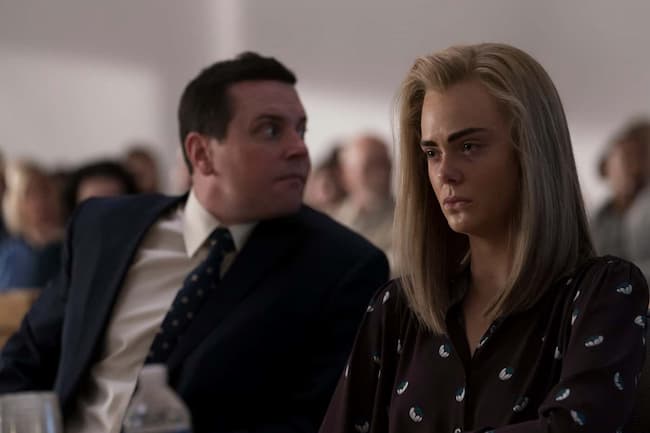 The Girl from Plainville is an American miniseries that is streaming on Hulu. The series came out in the year 2022, March. The series is based on actual events that happened between Michelle Carter and Conrad Roy. The genre that revolves around the series is murder and mystery.

The story is a true-crime story between the main characters. Episode 6, ‘talking is healing,’ takes place in the year 2017. The episode opens with the trial scene where Lynn and her daughter struggle to enter the courtroom.

In this episode, we find Michelle standing accused. She was charged with manslaughter and was sentenced to prison time. However, Her lawyer tries to save her.

Michelle gets special permission where she is judged without a jury. There is an opening statement on each side and a witness. The trial scenes are intense, adding more suspense and drama.

On the other hand, in 2014, Michelle sees herself in a hospital where she is getting therapy. The problem that led to therapy is due to her unbalanced food diet. Anyway, the therapy is a successful one where she gets positive effects on herself.

She moreover starts to analyze and reflect on her life. She works on her mental health and identifies her true self through this process.

The episode then explains Michelle’s isolation. Everything she desires is displayed to the viewers. Cassie and Natalie are then brought in to and are questioned on their roles and relationship with Michelle. Katie Rayburn then asks the girls to read the text message aloud.

This is evidence of the relationship between Michelle and Conrad.

In Conrad’s part of the story, he is being harassed by his own father. But when he tries to explain this trauma, it ends badly. He ends up getting angry and messes everything up. By the end of the series, we are shown that Lynn watches the video of Conrad and learns more about his true story.

The episode is all about how toxic Michelle and Conrad are to each other. The pain they both go through feels real even to the audience. The actors have done an excellent job in acting that we are able to connect with them.