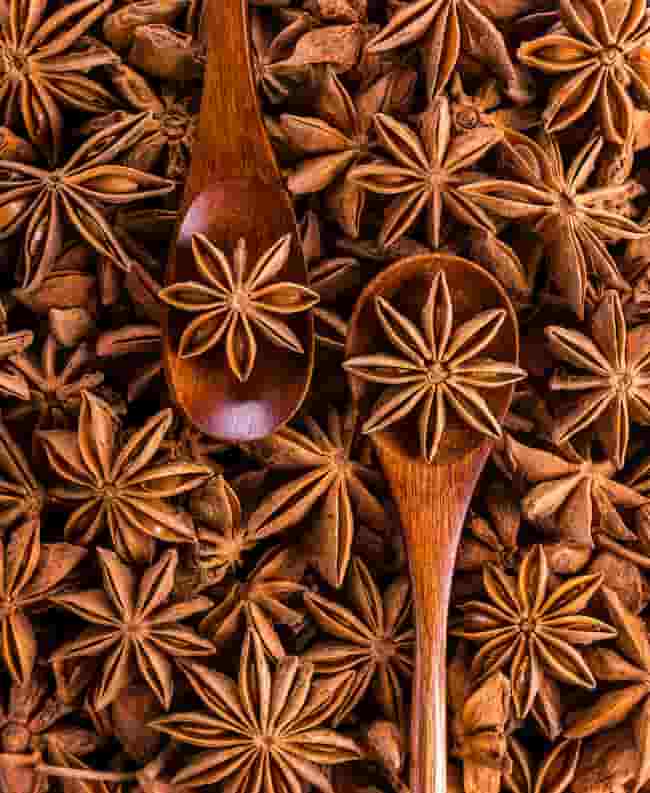 The Benefits of star anise

Star anise is one of the oldest recorded Chinese herbal medicines, prominently used in Traditional Chinese Medicine for over two thousand years. Star anise is most commonly known for its use in treating stomach aches and respiratory infections, but star anise has several other long-standing uses which are still practiced today.

The star anise plant is a small evergreen tree native to southwest China and northeast Vietnam. The plant itself grows up to 20 feet in height, with a trunk diameter of around one foot. Its bark is grayish-brown while its branches are a reddish color. Its flowers have a purple hue and grow in clusters, which eventually produce the star-shaped fruit that holds within it the star anise seed.

Star anise is typically harvested after four years when the trunk of the tree has grown to around nine inches in diameter. The fruits are then collected and dried before they are sold as whole stars or ground into a powder used for cooking. The seeds can also be removed and crushed for use in other herbal remedies.

Star anise has been used as a traditional Chinese medicine for thousands of years, most commonly to relieve stomach aches and respiratory infections such as coughs and colds. Star anise works by stimulating certain areas of the body, such as the digestive track, through chemical reactions in teas, capsules or oils.

How is it used?

The star anise fruit has a very sweet licorice flavor, which means that it’s commonly used as a spice in cooking and baking due to its unique taste. Star anise can be added to enhance the flavors of meat dishes such as stews, curries, and braised dishes. It also works well in both sweet and savory bread, cakes, and desserts.

Star anise is typically used as a spice to give food flavor, but it isn’t uncommon for people to consume star anise extract or oil as a dietary supplement for its health benefits. Those who do so take the extract orally as a capsule or in a tea, and apply the oil directly to the skin.

How is it used in food?

Star anise is commonly known for its use in Chinese five-spice, which combines star anise with cinnamon, cloves, fennel seed, and Szechuan peppercorns. The most common dish that uses star anise is phở, a traditional Vietnamese noodle soup.

READ:  Benefits and Side Effects of Weighted Blanket

Another way to use star anise in cooking is by adding it to meat dishes such as stews or curries. It also works well with sweet or savory bread, cakes, and desserts.

What are the health benefits?

Star anise has been used for hundreds of years in Traditional Chinese Medicine for its ability to soothe stomach aches and respiratory infections. Star anise contains shikimic acid, which is also found in the herb Astragalus membranaceus (Huang Qi). Shikimic acid helps break down viruses that cause flu-like symptoms, cold sores, and chickenpox.

The unique taste of star anise makes it a popular addition to both sweet and savory foods, which means that it can improve the flavors of some dishes that may otherwise be bland or unappetizing.

Star anise is most commonly used in Traditional Chinese Medicine for respiratory infections such as coughs and colds, stomach aches, and diarrhea.

Is it safe? Star anise is considered to be a safe food additive as long as it isn’t consumed in large quantities. Symptoms of an overdose include vomiting, stomach pain, and fever. The tea made from star anise is believed to increase milk production in breastfeeding mothers, which has been linked with several cases of infant jaundice from the chemicals found in star anise.

There’s a reason this beverage is known as the ‘cure-all’ of teas. With its health benefits that range from anti-inflammatory to cancer-fighting, it makes sense as to why! It can even help fight tooth decay and bad breath. This delicious tea is an incredibly powerful detoxifier, digestive aid, and immune booster.

And if that’s not enough, this tea is also known to improve digestion. Cinnamon provides relief for digestion problems like bloating, diarrhea, and nausea. Drinking this tea daily can help protect your body against the growth of certain types of cancer cells.

Star anise and cinnamon are two spices commonly used in Chinese herbal medicine. However, while these spices are typically safe for consumption, we do recommend that you consult with your doctor before trying this tea.

How to make star anise tea?

Preparing this tea is simple and easy. Bring water to a boil and add the anise seeds and cinnamon stick (which can be found at any local grocery store). Once you’ve added your spices, reduce heat and let simmer for about 10 minutes.

Once boiled, allow it to cool before drinking! You can also prepare this with honey or lemon. You can even prepare it with tea bags, which is also an easy way to enjoy the benefits of this remedy.

what are star anise tea side effects?

As long as you’re under the supervision of your doctor, drinking this concoction is completely safe. We do recommend that pregnant women or those who are currently taking medications monitor their health and monitor how this tea affects them.

In addition, the side effects of anise can include dry mouth or skin, which is why we do not recommend drinking it before going to bed. It also might make you a bit drowsy so be sure to drink it during the day!

how to use star anise essential oil?

You can easily incorporate star anise into your skincare routine with our many high-quality products! You can compare our different products to see which one might be right for you. We have facial serums, cleansers, toners, moisturizers, and even sunscreen!

Many of our star anise oil benefits include helping acne-prone skin by preventing the overproduction of sebum that causes breakouts. It works faster than benzoyl peroxide! Try our star anise oil serum for anti-wrinkle, anti-acne benefits that will transform the look and feel of your skin.

A cup of hot tea made with Star Anise is extremely soothing when you catch a cold or influenza. It will also ease your coughing and loosen mucus in the respiratory tract, making breathing easier.

Star Anise is an excellent weight loss aid and can suppress one’s appetite due to its warm scent. The warmth of the tea will also help increase your digestive enzymes for better absorption of nutrients.

Star Anise contains a compound called Allicin which has been found to be effective against breast cancer cells. It is believed to increase immunity and prevent diseases associated with hormones such as ovarian, uterine, cervical cancers, etc.

4. Inhibiting the Growth of Bacteria and Fungi:

Star Anise contains an essential oil that can be highly effective against external and internal bacterial infections.

Star Anise has been used as a toothache remedy for centuries because of its numbing quality. A paste made from the seed extract mixed with herbs such as clove will reduce pain quite effectively.

Star Anise oil can have a cooling effect on the skin and is used in aromatherapy to reduce redness caused by irritation or sunburn. It also has anti-inflammatory properties that can help wounds heal faster, especially those that are infected with bacteria or fungus.

Side Effects of Star Anise:

1. Star Anise Oil Allergy Some people can develop allergies to star anise oil and may also experience throat swelling and difficulty breathing if they come in contact with the oil.

2. Being a FODMAP food, consumption of too many star anise tea fruits or similar fodmap foods like apricots, apples, peaches, pears, etc. can result in gas and bloating.

3. Star anise tea should not be consumed by women who are pregnant or nursing because it may increase the flow of breast milk and lower blood sugar levels in their infants.

5. In case of a fever, avoid star anise tea because it may increase the body temperature and cause sweating when combined with other cold medications.

6. Do not consume too much of this fruit extract powder if you have kidney or liver-related problems because too many star-anise fruits can affect your liver and damage your kidneys.

7. A few people may be allergic even to star anise fruit extracts. If you experience abdominal pain or cramps, as well as diarrhea or vomiting after consuming these fruits in any form, stop using them and consult a doctor immediately.

8. Consumption of too many star anise tea fruits can also lower blood sugar levels and increase the production of insulin, so diabetics should avoid them as well.