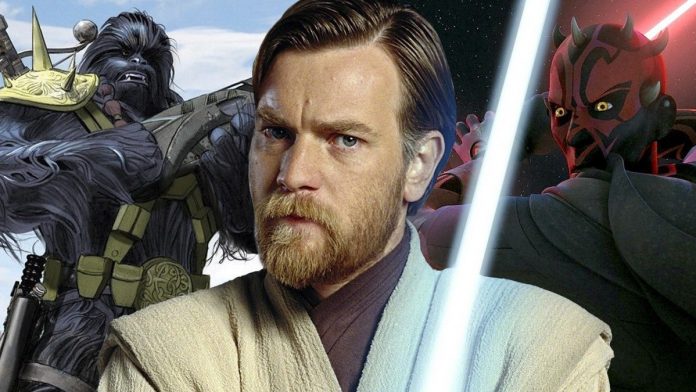 Now that the Jedi Master Obi-Wan Kenobi series on Disney + is going to start filming after a long period of development (which was originally going to be a new movie), it seems like a good time to celebrate by reviewing some of the best moments of this classic Star Wars character.

We still don’t know much about the series other than the fact that Ewan McGregor will reprise his iconic role as the lead and that Hayden Christensen will also return to the Star Wars fold as Darth Vader in the series.

There are a good number of Obi-Wan stories that could be adapted into the series, so read on for some of Obi-Wan Kenobi’s best moments from both the current Star Wars universe and classic stories.

Obi-Wan was still a Padawan apprentice when he left his first real mark on the galaxy in The Phantom Menace. Obi-Wan managed to become the first Jedi in a thousand years to defeat a Sith Lord in open combat. This spectacular combat (one of the best in the entire saga) served as a promotion to Jedi Knight, albeit at a high cost.

Years before the Clone Wars animated series chronicled Obi-Wan’s exploits between Episodes II and III, Steven Barnes’s 2004 novel Star Wars: The Cestus Deception offered the definitive version of this Jedi Master. This book teamed up with Obi-Wan with his colleague, Jedi Master Kit Fisto, to stop a Separatist plot that involved bio-droids, fearsome warriors capable of fighting head-to-head with Jedi.

The Star Wars movies tend to portray Obi-Wan as a chaste monk who is not in conflict with his role in the Jedi Order. But Star Wars: The Clone Wars added various shades of gray to the Jedi Master in this regard. In season 2 we meet Duchess Satine, the ruler of Mandalore and an old love of Obi-Wan. It was a fascinating relationship that continued to grow throughout the series.

The Clone Wars took a dark turn in the season 4 episode “Disappointment”, as Obi-Wan was apparently killed by someone named Rako Hardeen. But it turned out that Obi-Wan simply faked his death to impersonate Hardeen and go undercover. That turned out to be the start of a multi-episode arc that showed us a very different challenge for this elite Jedi Master.

Obi-Wan established himself as one of the best swordsmen in the galaxy when he defeated Darth Maul in one-on-one combat. But he really cemented his reputation by singlehandedly defeating the nightmare of Jedi Knights across the galaxy, General Grievous. Even having four ultra-fast lightsabers at his disposal was not enough to help Grievous survive Master Kenobi’s unshakable ability.

Loss of a friend

Obi-Wan had the toughest moment of his career when he faced his fallen student Anakin on the fiery surface of Mustafar. Obi-Wan eventually triumphed over his arrogant foe, but not without great personal cost. Star Wars fans will always wonder how the galaxy would have changed if Obi-Wan had decided to end Anakin’s life in that battle.

Marvel Comics has offered a fresh take on Obi-Wan’s lost years living on Tatooine, thanks to a recurring story called “From Old Ben Kenobi’s Diaries.” The success of that story finds its peak in Star Wars # 20, which features a flashback to Obi-Wan’s brutal battle with Black Krrsantan, a very bad-tempered Wookiee bounty hunter.

Before the Clone Wars animated series established that Darth Maul survived his encounter with Obi-Wan on Naboo, Dark Horse Comics addressed the idea in a series called Star Wars: Visionaries. While not intended to be canonical, Aaron McBride’s “Old Wounds” story clearly influenced The Clone Wars in its depiction of Maul as a wild monster, cybernetically enhanced and hell-bent on revenge. In an interesting twist, Obi-Wan couldn’t bring himself to execute his former enemy, leaving Owen Lars to finish the job for him.

READ:  The Gilded Age Is Returning To HBO With A Second Season

The reunion with Maul

It was the animated series Star Wars Rebels that finally offered the definitive account of the final battle between Darth Maul and Obi-Wan Kenobi. The season 3 episode “Twin Suns” saw Maul track down his former enemy to discover that, even in old age, Obi-Wan is not to be underestimated as an opponent. Obi-Wan defeated Maul once and for all, protecting Luke once more and leaving his dying foe with the certainty that the end of the Sith was near.

Obi-Wan Kenobi is a man who knows how to make an entrance. In Star Wars: A New Hope, he not only scared off an entire group of sand dwellers, but he introduced himself through one of the most iconic lines in the Star Wars saga when he admits not having heard his own name in a long time. , long time.

Obi-Wan is a skilled Jedi Master who has surpassed some of the best warriors in the galaxy. But viewers weren’t aware of that when they saw Obi-Wan walk into the miserable hive of scum and villainy that is the Mos Eisley Cantina. Obi-Wan showed what it means to be a Jedi when he protected Luke from an encounter with Dr. Evazan and Ponda Boba. Only after his peaceful proposals were rejected did Obi-Wan unleash his sword and give poor Ponda a lighter arm.

Obi-Wan may have been powerful enough to defeat enemies like Darth Maul and General Grievous, but he found his toughest rival in his former student, Darth Vader. But Obi-Wan is able to show his strength in both defeat and victory. He kept his promise to become more powerful in death than Vader could imagine. Only in the context of the prequel trilogy do we understand how rare it is for a Jedi to become a Force Ghost after death.

It wasn’t long before Obi-Wan proved that he could be more useful in death than in life, as his disembodied voice guided the young Jedi Luke Skywalker to give him the confidence he needed to bring down the Death Star.

A certain point of view

Luke’s reunion with Obi-Wan’s Force ghost in Return of the Jedi is definitely a memorable moment for both characters, if not the brightest point in Obi-Wan’s long career. Here he finally recognized what he had kept from Luke for all those years: that Darth Vader is Luke’s father. Obi-Wan imparted a bit of Jedi wisdom: that truth depends on a person’s point of view. But at the same time, we have to wonder if this little hoax fuels Luke’s decidedly anti-Jedi stance in Star Wars: The Last Jedi. Ultimately, it all comes down to … your own point of view.

Obi-Wan may have long died from the events of Star Wars: The Force Awakens, but his voice (via Ewan McGregor and the late Alec Guinness) can be heard when Rey discovers Luke’s lightsaber and accepts his relationship with the Force for the first time. He can also be heard on The Rise of Skywalker.

These are, for us, the best Obi-Wan Kenobi moments in Star Wars history. Which ones are yours? Any absences you miss on the list? May the force be with you.