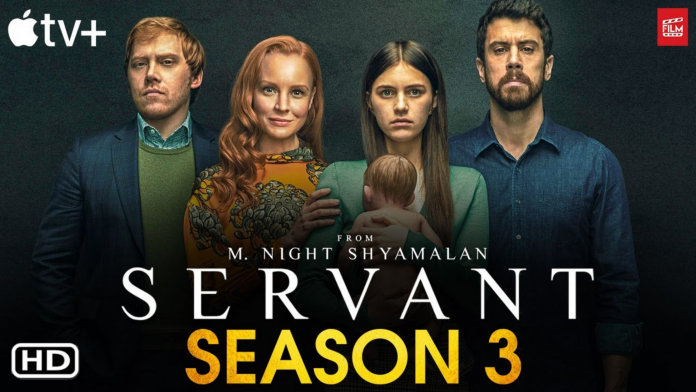 Apple TV is back with its most engaging psychological horror drama, Servant season 3. Now that the Turner Family is back, there’s danger surrounding their every step, especially the Philadelphia townhouse.

Episode 1, “Donkey”, is a mood-setting start to the season, hinting at a spine-chilling experience ahead. With haunting imagery and a threatening atmosphere, the first episode builds a firm ground for the entire season.

In Donkey, we see that Leanne and the Turner family is traumatised from the incidents that happened in the previous season. Leanne woke up from a nightmare and started to pray with a dagger in her palms. She heads downstairs in the hallway.

There, Leanne sees the family playing with tiny Jericho. She is tempered by the fact that the door is open, and there is a chance that the cult might intrude at any time. Although Dorothy assures her, Leanne is restless.

The thought of going outside and raking about the city gives Leanne extreme anxiety. She has also been turning down the chance of going on a trip with the Turner family. She constantly insists that staying in might be better for her.

However, is she really safe even when she’s indoors? Later on, she decides to take a walk around the street, along with baby Jericho and Julian.

Julian takes this moment as a good opportunity to be a responsible man. He asks Leanne that maybe she should involve in a sexual relationship with some guy who is her age.

But things don’t go as planned. Leanne shuts him up and says that whatever they have now should much rather continue. While Julian is talking about his girlfriend who is supposed to join the family vacation, Leanne caught a glimpse of George, or at least she thought.

As planned, Leanne decides to stay in the house, despite Dorothy’s constant persuasion. Yes, Dorothy is still blind to whatever is happening around her. However, Leanne’s decision was probably going to dig a grave for her. As she does her daily chores, she hears the door shut close. That was the first alarm for her.

Leanne then ends up having some soup in the house’s basement. Maybe she could go for a better place than the basement, given all the unprecedented events that had gone down there. While being on a video call with Sean, Leanne caught on to the bubbling on the mud.

Leanne remained lonely in the basement. With Tobe refusing to come over straight away, she’s left with nothing but fear.

As the episode progresses, Leanne notices a man entering the house. Leanne explains to Sean the situation through the video call. He assures Leanne that the police will be there soon.

The police inform the family about burglars, and they are mostly here when families go out on vacation. The episode then ends with a mortified Leanne looking at the moth sitting on the lampshade of her bedroom.