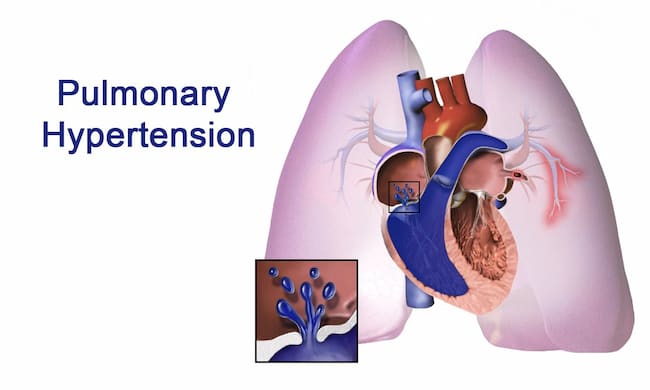 Pulmonary hypertension is a serious condition in which the blood pressure within the arteries that carry blood from the heart to the lungs is elevated.

Primary pulmonary hypertension may occur in children or young adults. However, elderly patients are also affected.

It is more common in women than men. It can be associated with pregnancy with symptoms usually starting during late pregnancy or shortly after delivery. Early death often results even if the patient survives childbirth.

Chronic thromboembolic pulmonary hypertension occurs when an established state of chronic thrombosis (i.e., due to previous episodes of pulmonary em) leads to vasoconstriction and loss of vascular compliance. It is seen mostly in young and middle-aged adults and carries a grave prognosis.

Pulmonary hypertension is a progressive condition in which the arteries in your lungs narrow and stiffen. This makes it more difficult for blood to flow through them, which means that there is less oxygen (less O2) in your bloodstream. If you have pulmonary hypertension, you may feel symptoms like shortness of breath at rest or with mild activity, chest pain when you breathe, an irregular heart rate (arrhythmia), swelling in the legs and ankles, fatigue and dizziness.

There are few causes behind pulmonary hypertension but here we can see some reasons for this disease:-

1- Some unknown genetics cause pulmonary hypertension

3- Infections that may damage or scar small vessels in the lungs and can cause pulmonary hypertension.

READ:  Tamanu oil Benefits: The Miracle oil From the East

% of people who die from Pulmonary Hypertension:

The main thing about this disease is, it’s serious and even if you get treatment for this disease there is no guarantee that your life will be saved. Because this disease results in death so quickly. According to statistics, around 10% to 15 % of people with pulmonary hypertension die each year without getting any treatment.

It’s a progressive and chronic disorder and symptoms of pulmonary hypertension appear slowly while that person gets older.

The first sign of PAH is increased heart rate while that person suffers from mild physical activities like walking up the stairs. There is also shortness of breath in this condition that makes that person very stressed and tired with little physical activity. He/she has to swell in ankles, arms, legs and even face appears swollen due to extra accumulation of fluid in these areas.

The main thing about this disease is, it’s serious and even if you get treatment for this disease there is no guarantee that your life will be saved. So to save their lives people should treat this disease immediately. Here we can see some known methods of pulmonary hypertension treatments:-

There are some medicines available in the market which helps to lower blood pressure and strain on the right side of the heart and increase the flow of oxygen in the lungs and muscles. Medicines like anticoagulants (blood thinners), diuretics (water pills), and commercial gels for inhalation help to improve symptoms in patients.

Pain behind the knee:

Pain is one of the most frequent symptoms of arthritis, but it can also be caused by injury or trauma. The pain may come on suddenly with an injury or develop over time with repeated strain to the affected area.

It can range from mild to severe, and it ranges in location; people tend to report pain behind their knees more than in other areas. Some common causes include:-  muscle strain, torn cartilage (menisci), trapped nerves, thigh bone injuries (fractures), and infections like bursitis or tendonitis

Pain in the knee while kneeling:

All of us kneel from time to time, but not all knee pain is the same. In some cases, knee pain while kneeling could be a sign of serious arthritis or another medical condition. In other cases, it might just be a muscle strain or soft tissue injury, which will usually get better with rest and over-the-counter pain relievers.

Pain behind the knee after bending or twisting:

If you have a sudden, sharp pain behind your knee that occurs when you bend your leg or twist your knee then this symptom could be an indicator of a meniscal tear, which can happen if you suddenly twist yourself while performing daily activities such as lifting heavy objects off the ground. Sometimes,

the doctor will even see a torn meniscus on an MRI (magnetic resonance imaging). However, not all knee pain behind the knee is an indicator of a torn meniscus. The medial or lateral meniscus can also tear if you fall down and land on your knees. This sudden jolt can cause your knee to buckle inward, resulting in damage to either the inside or outside parts of your menisci.

Pain behind the knee that gets better when walking:

You may feel pain behind your knee that goes away when you walk only to return again once you stop walking. If this happens, it’s likely you have iliotibial band syndrome (ITBS), which occurs when there is inflammation of the thick band of tissue that runs along the outside of your knee. ITBS is often mistaken for patellofemoral pain syndrome (PFPS). However, with iliotibial band syndrome, your kneecap does not move out of place like it can when you have PFPS.

Hypertension is a medical condition in which the blood pressure is chronically elevated. It is often called the “silent killer” because it produces no symptoms at all and goes undetected for years until complications arise, such as heart attack or stroke. Pulmonary hypertension refers to high blood pressure of the arteries that carry blood from the heart to the lungs.

Pulmonary stenosis, also known as pulmonic stenosis or PS, is a narrowing of the passageway through which blood flows out of your right ventricle into your pulmonary artery. When this occurs there are several signs and symptoms that may occur including:  catching of breath after exertion, wheezing or coughing on exertion, rapid breathing, chest pain, bluish skin coloration.

A pulmonary embolism is a sudden blockage in one or more arteries of the lung. If the artery that supplies your lungs with blood becomes blocked, then part of your lung does not receive any blood and becomes damaged. The damage causes inflammation which leads to swelling within the walls of affected arteries. As a result, narrowed passageways are created for blood flow through the lungs so less oxygen reaches your bloodstream.

Hypertension is the most common form of high blood pressure. It happens when your heart doesn’t pump blood to your organs properly or if your blood vessels are resistant to relax and widen. The latter case results in elevated arterial pressure; this means there could be an obstruction (narrowing) in one or more of the arteries leading to the lungs (pulmonary artery).

When you’re having a panic attack, your breathing speeds up and becomes more shallow as a physiological response to the body’s fight-or-flight mechanism. In this case, your brain tells you that there’s something wrong with your lungs or breathing even though that may not be the case at all.

It would be helpful if you could actually measure how much carbon dioxide is in your bloodstream, but most people can’t do it at home. So instead, try using a pulse oximeter every time you feel like this to see if it’s related to pulmonary hypertension or not.