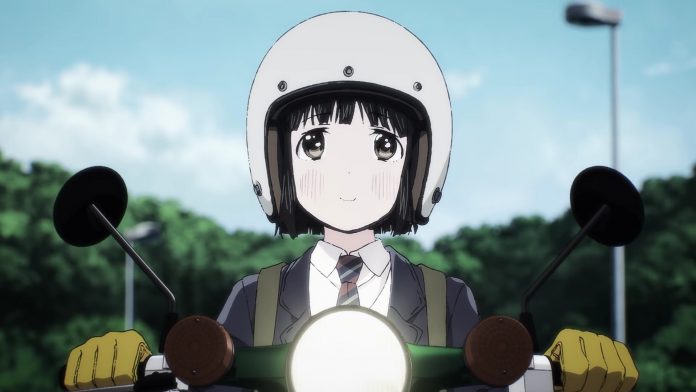 Since the beginning of the year it was confirmed that the animated adaptation of the novels Super Cub written by Tone Koken and illustrated by Hiro It would be released during the spring of this year, and since then a couple of updates have been published, such as that its premiere will be on April 7, as well as that Akane Kumada will perform the opening titled “Mahou no Kaze“, while Yuki Yomichi, Ayaka Nanase and Natsumi Hioka, the three leading voice actresses will be in charge of the ending “Haru e no Dengon”.

A day before the anime premiered, the website shared a promotional image in which we can see the protagonists enjoying an ice cream.

A particular detail in this series is that it will have the collaboration and supervision of Honda Motor Company.

The story of the novels centers on Collect, a high school girl in Yamanashi. She has no parents, friends, or hobbies, and her daily life is empty. One day, Koguma buys a used Honda Super Cub motorcycle. This is the first time he has been to school on a motorcycle. Running out of gas and deflecting hits becomes a small source of adventure in Koguma’s life. She is satisfied with this strange transformation, but her classmate Reiko ends up talking to her about how she also goes to school on a motorcycle. One Super Cub begins to open the world of a lonely girl and presents her with a new life.

READ:  Pedro Pascal as Joel Miller in The Last of Us

For now, the cast is made up of:

The anime will feature the direction of Toshiro Fujii (Boruto: Naruto Next Generations) in Studio KAI, being Toshizo Nemoto (Macross Delta, Last Hope) the scriptwriter, on the other hand, Tōru Imanishi will be in charge of the design of the characters, in the musical composition there will be the collaboration of Tomohisa Ishikawa and the musician ZAQ.

Other staff members who will collaborate in this project are:

The novels have been written by Tone Koken and illustrated by Hiro, released in May 2017 and adapted to manga in December of the same year.

READ:  where we can see Kerem Bürsin and Hande Erçel beyond the hit Turkish series