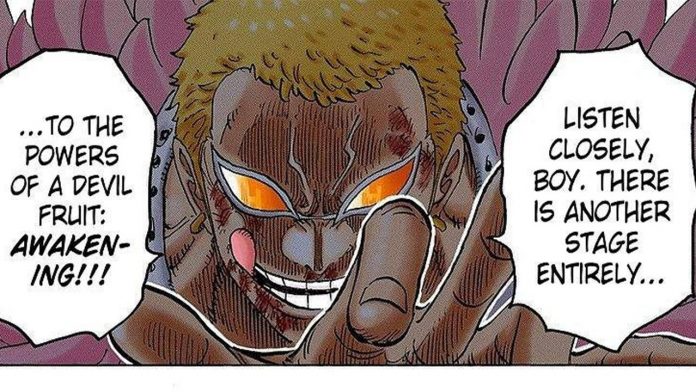 The powers in ONE PIECE are many and exploited differently depending on the nature of the character. There is the prodigious Haki with his shades, fighting techniques known as Rokushiki and many others. But the most bizarre and used powers come from the Fruits of the Devil, the mysterious foods that have appeared since the beginning of the manga.

Beyond their divisions into Paramisha, Zoo Zoo, and Rogia, Devil Fruits have been shown to have other abilities, and one of them is Awakening. This feature was introduced under the track by Eiichiro Oda already from Impel Down, but only with the battle on Dressrosa was it actually declared functioning. Let’s see what the Awakening of the Devil’s Fruits by ONE PIECE and who has used it so far.

The “kakusei” (覚 醒), or Awakening, greatly increases the ability to use a Devil Fruit. It is not yet known if there is a need to be satisfied to activate this technique, but the result involves extending the range of one’s powers or controlling the battlefield. These also change depending on the type of Devil Fruit: a Paramisha can transform objects and terrain into their own characteristic, while the Zoo Zoos increase the strength of their bearer and give a much more animalistic nature.

READ:  Dragon Ball Super volume 15, who is hiding on the back cover? The appearance of Uub

The first to be shown in the Awakened state are the Devil Fruits of the Impel Down jailers who, as Crocodile noted in chapter 544, possessed this then still unknown ability. The second to show the Awakening was Donquijote Doflamingo’s Devil Fruit in Dressrosa, while the last one was Katakuri Charlotte in the kingdom of mirrors with her Devil Fruit Mochi Mochi who transformed the floor and battlefield into mochi making it more difficult for Luffy to move.

The Awakenings of the Devil’s Fruits have also appeared in the ONE PIECE films, by the main antagonists of the films. In ONE PIECE Gold, Gild Tesoro was able to create an extremely complex sensory system with his Goru Goru no Mi, while in ONE PIECE Stampede Douglas Bullet awakened the Gasha Gasha no mi, thus being able to break down and recompose even land and other objects.

For now, the Awakening of the Devil Fruit remains one of the darkest aspects of these elements in the world of ONE PIECE. Many Devil Fruits are powerful even without resorting to this feature.

READ:  Boruto: Naruto Next Generations suggests that Amado is not an ally