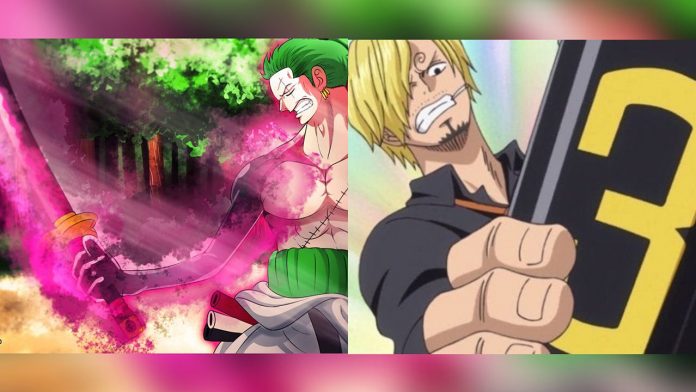 In ONE PIECE there is a lot of joking about the relationship between Roronoa Zoro and Sanji Vinsmoke, two historical members of the straw hat crew. Although rivals, the two have made their very important contribution during the journey that will allow Monkey D. Luffy to become the King of the Pirates.

For much of ONE PIECE’s history, their strength has been similar despite Zoro being certainly superior. Yet in the latest sagas this gap appears to have increased dramatically for various factors. If at first Zoro’s strength had been counterbalanced by obtaining the Vinsmoke Raid Suit, in Wanokuni the gap seems to have become very wide if not unbridgeable.

Already the obtaining of Enma by Zoro had led the swordsman to touch new levels unthinkable for the cook, but it is in chapter 1010 of ONE PIECE that there seems to be a further power up for Zoro. In fact now it is swordsman officially has the Conqueror King’s Haki, as well as its captain. An extremely powerful weapon as demonstrated by Luffy’s attack against Kaido in the last pages of the last chapter. Just as characters like Roger, Whitebeard, Oden and Rayleigh have done for many years, Zoro could learn to insert his Haki into the slash of his swords, creating deadly attacks.

On his side, Sanji seems to have very little room for improvement. The cook seems indeed stuck in an impasse that will take him to the maximum level of Jinbe. The Raid Suit, although resistant and excellent for various maneuvers, would not be enough to put it on a par with the strongest pirates. The events of Wanokuni have yet to end, but it will be important for Sanji a clash with opponents of the caliber of King and Queen to show that despite everything he is still able to clash at the highest levels.