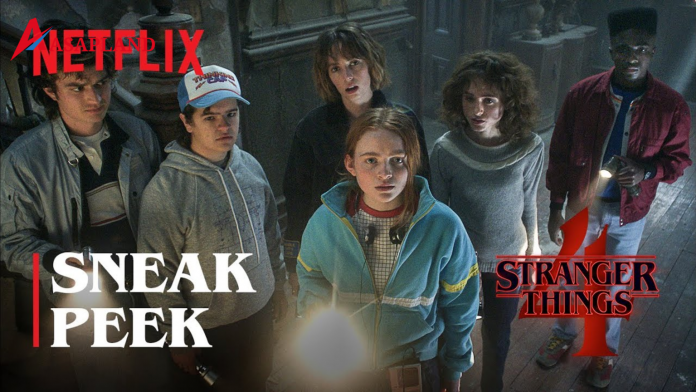 Stranger Things season 4 has been set to release this summer. With the new teaser released recently, the fourth season will premiere before the end of March. However, there can be a slight change in the release sequence.

Stranger Things’ official page has posted a notice which indicates such changes. However, the shifting formats are not really official as of yet.

With the official announcement of season 4, Stranger Things will mark three years of the show’s continuation on Netflix. There were different problems with the release of Stranger Things season 4, including the constant delays in production.

The filming was being shifted also due to the circumstances under the global pandemic. However, we see why fans would be impatient for further news.

Any information regarding the fourth season of Stranger Things has been relatively slow. Not until recently, we were provided with trailers, premiere dates, and updates on the show. In December 2021, famous social media account Deuxmoi shared a report that the new season might premiere on July 1st, 2022.

A post made recently on the official page of Stranger Things stated that there would be monthly releases. Yes, our breaths were caught too. However, Netflix was quick enough to take it down and call it a mere glitch.

Usually, Netflix releases the show at once instead of fixing a time slot for each episode to premiere. However, with many series, they have tried premiering episodes on a weekly basis. However, there’s no confirmation for Stranger Things season 4.

This incident gives us the idea of changes in the release format. The show could premiere every day for all we know. There could be endless possibilities for the fourth season, but we can only guess.

READ:  What To Expect From The Second Season Of Sweet Magnolias?

Weekly premieres could be profitable for Netflix as big shows like Stranger Things have colossal viewership.

It is likely for the show even to top the global charts as it always does. Hence, we will not be surprised if Netflix schedules the premiere of each episode. After all, the show serves them to the fullest.

In all honesty, fans would have gone crazy if Stranger Things season 4 was to premiere on a monthly basis. That is like the most extreme decision Netflix could make for the show. Fortunately, we don’t have to anticipate the intervals of one whole month.

Given that Stranger Things has done so well globally, it would be hard to watch a show as great as it is. However, we would like to hear your opinions as well. Would it be a good choice for Netflix to premiere the episodes of Stranger Things every month? What are your thoughts?