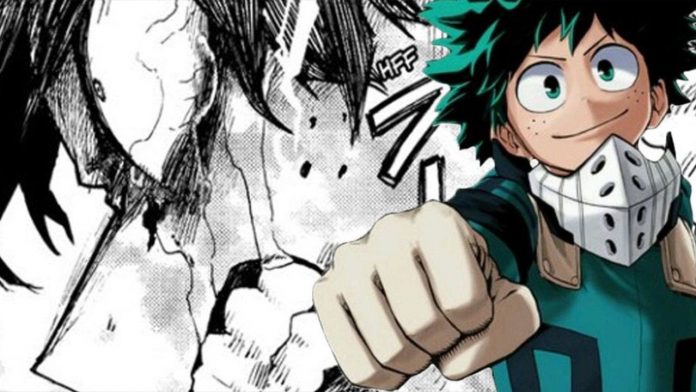 The situation in My Hero Academia it’s hot. Japanese society now seems to have lost all possibility of resistance against the villains and many of these run around the cities, killing and plundering the defenseless civilians.

Muscular is one of them and, after knocking out Shindo, he found himself up against Midoriya. The two gave birth to a second round that was swept away by the protagonist of My Hero Academia. Utilizing all of One for All’s unlocked powers, Deku delivered a well-placed punch that has messo Muscular KO.

The villain is thus brought before a police district at the beginning of My Hero Academia 309, with the protagonist who immediately flees the area. Shindo seems to have recognized him, finding him very different from the little boy he met months before during the exam for the provisional hero license. Now Deku is always on the move and uses his sense of danger to figure out when to go to someone’s rescue. However, he finds time to meet All Might in a dark alley, where the protagonist thanks him for the prototype of gloves ordered from overseas and which provide him with more support for his arms.

All Might also gets a call from Hawks who keeps himself informed, along with Best Jeanist and Endeavor, on Midoriya’s movements. While the boy senses a new danger and goes to the rescue, the former hero thinks back to the moment when Deku woke up in the hospital. After being healed by Recovery Girl, Deku learns that his body has changed compared to before and therefore it seems that the One for All at 100% no longer does the same damage, even if he doesn’t have to overdo it anyway.

Izuku’s mother learns about One for All and worried asks her son not to go on, but Deku hugs her and tells her that he has to go and save people as he did as a child while they were playing. As soon as Deku leaves the academy, the new group of heroes formed by him, Endeavor, Best Jeanist and Hawks for prevent All for One from conquering Japan.