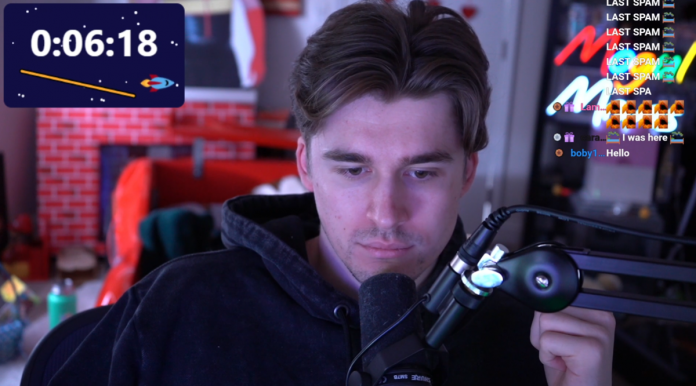 After broadcasting non-stop for 31 days, Ludwig Ahgren has amassed more subscriptions than anyone else in Twitch history. At the time of this writing, Ahgren has over 273,000 subscriptions and counting, breaking the previous record of 269,155 held by Tyler “Ninja” Blevins.

Ludwig’s broadcast began on March 18 and we already told you that he even slept live. The reason is a self-imposed challenge by the streamer: with each new subscriber the duration of his live was extended by ten seconds. Although he had originally planned the broadcast to last a day or two, the project became so popular that Ahgren gained enough subscribers to extend the timer for weeks. Although he has not always been playing, not even conscious, Ludwig has continued transmitting without stopping.

“There is”Ludwig commented when he beat Ninja’s record.”You were here. This is the new record on Twitch for the total number of subscribers of all time. Shit this was crazy”.

After breaking the record, Ninja expressed his congratulations to Ludwig on Twitter. “Records are bound to be broken”he commented.”I’d be lying if I said I’m not a little sad, but congrats to @LudwigAhgren for having the new record on Twitch”.

READ:  The Umbrella Academy : All About Renewal of Season 2!!

After broadcasting live on both YouTube and the now-defunct Mixer, Ludwig returned to Twitch in September of last year, signing a multi-year exclusive contract that ties him to the platform.

Ludwig and Ninja’s subscriber numbers far exceed any other content creator on Twitch. Streamer RanbooLive has the third-most with 114,387 subscribers in March, not even half of Ninja’s previous record.

Ludwig has already interrupted his live broadcast after more than a month live. To commemorate the end, Ahgren would make a donation to St. Jude Children’s Hospital or the Humane Society.