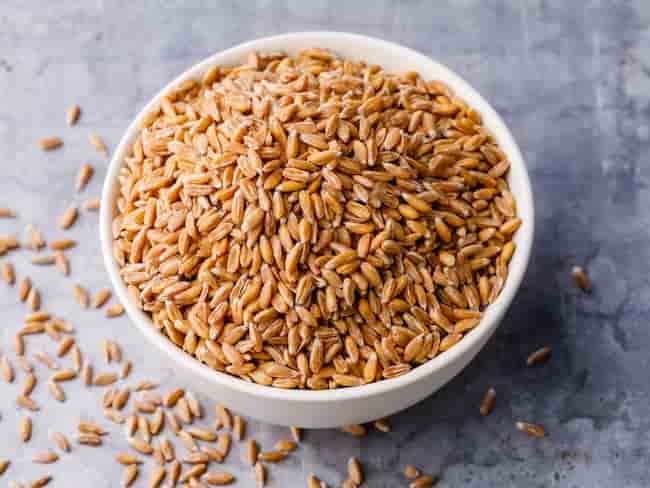 Almost all people with wheat allergy are allergic to one or more of the following proteins, called gluten proteins:

gliadin, glutenin, hordein.1  The primary sources of these proteins in foods are wheat, barley, and rye. If celiac disease is excluded, single sensitization to other substances is rare in children <2 years old. The prevalence of any allergy was 10% among adults with dermatitis herpetiformis (DH), whereas it was 12% among those who were histologically negative for DH.

However, amongst healthy subjects not suffering from DH, the prevalence ranged between 0-4%. The risk factors associated with food allergies are ingestion by mothers during pregnancy or breastfeeding, eczema, and family history of atopy.

Environmental and lifestyle factors may also play a role in developing wheat allergies. For example, exposure to dust mites and pets may increase the risk of developing an allergy to wheat. Additionally, eating a diet high in processed foods or foods that are not fresh may also increase the risk.

Treatment for wheat allergy typically includes avoiding wheat, barley, or rye foods. In some cases, individuals may also need to prevent cross-contamination with these foods.

Some people with a wheat allergy may also require injectable epinephrine (EpiPen) if they experience a severe reaction to wheat. If an individual has a wheat allergy but can tolerate other forms of gluten, they may be able to eat products that have been “gluten-tested.”

It can manifest itself in various ways, but the most common are:

Flatulence (intestinal gas) is related to the increased fermentation of carbohydrates in the colon. It may result from fructose, lactose, sorbitol, xylitol, and maltitol malabsorption. Other carbohydrates may produce similar symptoms due to the osmotic effect.

These include fructans, which cause excessive intestinal fermentation by themselves or together with sucrose polyester oligosaccharides. This is because these oligo or polysaccharides have a high molecular weight compared to other carbohydrates, cannot be digested by humans, and thus ferment in the intestine.

Wheat is a significant source of soluble fiber that, when not properly digested, can cause bloating or flatulence.

Wheat can also result in diarrhea because it contains amylase trypsin inhibitors, which inhibit the enzymes responsible for starch digestion and absorption from the small intestine into the bloodstream.

This leads to malabsorption of the starch and consequent diarrhea. Wheat intolerance can also cause constipation. This is because wheat bran is a high-fiber food that helps to add bulk to the stool and stimulate bowel movements. However, if someone is intolerant to wheat, they may not tolerate the high-fiber content of wheat bran and experience constipation instead.

In some people, wheat may also cause stomach cramps and pain (abdominal discomfort). This may be due to a sensitivity to one or more of the proteins in wheat (gluten, gliadin, hordein, decalin), which can activate the immune system and lead to inflammation.

A wheat allergy is a specific type of food allergy caused by an immune response to the gluten proteins in wheat. These proteins are found in all forms of wheat, including whole wheat, spelled, and Kamut.

A gluten allergy is a different condition caused by an immune response to the gluten proteins in wheat, but it affects a much more comprehensive range of people. Up to 1 in 3 people with celiac disease (a severe form of gluten intolerance) may have gluten allergies.

There are some essential distinctions between a wheat allergy and a gluten allergy:

READ:  What are The Causes of Yellow Eyes?

-A wheat allergy is more common than a gluten allergy.

-A wheat allergy is usually less severe than a gluten allergy.

-A wheat allergy can be treated with avoidance of wheat products, while a gluten allergy requires lifelong avoidance of all foods containing gluten.

If you think you may have a wheat allergy, it is essential to see an allergist for testing. An allergist can perform a skin prick test or a blood test to determine if you are allergic to wheat.

If you are diagnosed with a wheat allergy, the best way to avoid symptoms is to avoid eating any products that contain wheat. This includes loaves of bread, plates of pasta, cookies, crackers, and other processed foods. It is also important to read food labels carefully and avoid any wheat products as an ingredient.

The level of sensitivity to wheat (or any other potential allergen) that is considered normal varies from person to person, depending on how long they have been eating that food without problems. It also depends on how the food was introduced into the diet (e.g., nutritionally required?).

Generally speaking, IgE-mediated (immediate allergy) reactions are expected to be seen in infants and young children when they first start eating a specific food, especially if the first exposure is only via breastfeeding. Babies produce IgA antibodies, but not IgE antibodies at birth, so their immune systems do not recognize new foods as allergens until about one year of age or later.

Adult sensitivity levels are generally not expected after several years of continuous exposure to a food allergen.

The presence of specific IgG antibodies in the blood does not mean that a person has an allergy, only that they have been exposed to the allergen at some point in their life.

IgE antibodies are specific for certain allergens (e.g., wheat, milk, egg) and are produced in much higher levels during an allergic reaction. On the other hand, IgG antibodies are not specific for any one allergen and are found in high levels in people with multiple allergies.

The most common wheat allergy symptoms in adults are respiratory (e.g., asthma, hives). Gastrointestinal symptoms (e.g., nausea) and skin reactions (e.g., eczema) can occur as well, but they are less typical of an IgE-mediated food allergy reaction.

Wheat allergies tend to be more severe than other food allergies because many people eat wheat daily without any adverse effects until they suddenly develop an allergic reaction after being sensitized by eating it for years.

Some studies have suggested that people with celiac disease may have higher rates of other gluten-related disorders, including non-celiac gluten sensitivity and wheat allergy. Therefore, it is possible that some people who are sensitive to gluten may not have celiac disease but may still experience adverse health effects from eating foods that contain gluten.

This includes loaves of bread, plates of pasta, cookies, crackers, and other processed foods. It is also important to read food labels carefully and avoid any wheat products as an ingredient.