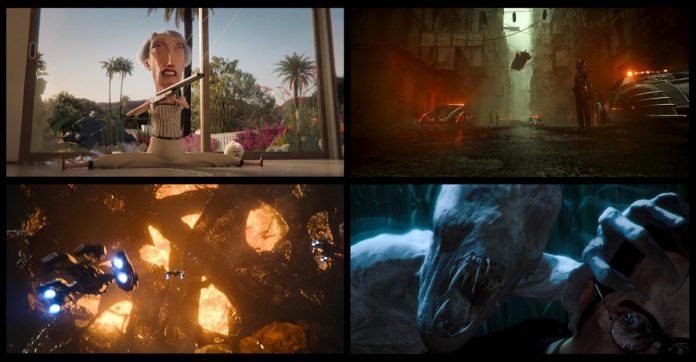 The premiere of the second season of Love, Death, and Robots (Netflix) is just around the corner, and the third season is not far behind.

The second volume of the anthological series will premiere with eight episodes on May 14. In addition, a trailer of it has been released, which you can see below. Netflix also ordered a third season, which will be released in 2022. Considering that the first volume took years to complete, both Netflix and the creative team thought that fans would benefit more from have eight episodes this year and eight more next. The new season will combine the ideals, aesthetics and storytelling of science fiction both dystopian and utopian, as well as the fantasy narration, a mixture similar to that seen in the first season, and with which many fans fell in love.

IGN met with creator Tim Miller and director Jennifer Yuh Nelson before the announcement to talk about the series, the animation and what is to come.

Animation, especially adult animation is experiencing a little renaissance. Between Adult Swim, YouTube, and Netflix series like Love, Death and Robots, it’s an exciting time for sci-fi fans who want a little more adult storytelling. A show like Love, Death and Robots would have faced a harder time getting the green light if it had appeared 10 or 15 years ago. Adult Swim was one of the few networks that tried to give it a try to adult animation, but it was even restricted by FCC rules. On Netflix, where anything goes, Miller and Nelson are doing the program they dreamed of working on when they were teenagers.

“The first season of LDR was really groundbreaking for a lot of people.”Nelson, who joined the show this year as supervising director and directed some of the shorts, told IGN. “And people saw that and thought: ‘This is possible’; that level of beauty and quality and only subversive stories was possible. As a fan, that’s something I’ve always wanted to do. “.

When Miller and David Fincher released the first anthology set for Netflix years ago, it was still a bit risky. Netflix i didn’t have any data to test if something like this could work. For a streaming service based on the use of data to place its bets, it was like entering completely blind. Miller had heard similar responses before from the networks: executives they didn’t know if the idea would work, and that uncertainty is part of what led heavy metal to be in limbo for more than a decade, Miller told IGN. He was concerned that Netflix would not go ahead, but was pleasantly surprised.

“They came back and said: ‘We don’t have any data, we don’t know if it’s going to stagnate or explode, but we think it’s cool and we’re willing to take that risk”, He said.

Now, with the second volume of the series right around the corner, Miller and his team have shown that there is an audience for this type of adult animation. While part of Love, Death and Robots is mature, and while part of it requires a larger audience to feel through a bloody or haunting scene, the creators they did not get nervous. The goal is to find a balance of stories, some lighthearted and some a little darker, that feel distinctly different.

Miller and Nelson have always been committed to find stories that resonate with them and their teamBut there was a new challenge that greeted them as they worked on the second volume: the pandemic. Even if the pandemic itself did not interfere with your work (animation is one of the few areas of entertainment that can be done almost entirely remotely, which is why some networks turned to hybrid animation episodes for their own series), there were some internal conversations about images in the shortsas they may have belonged to the pandemic. Ultimately, Netflix did not intervene, giving Nelson and Miller their full support.

“They really trust us to do what we think is right”Nelson said. “We had some internal discussions, but it really was like, ‘Oh, isn’t it weird that’ Snow in the Desert ‘has a lot of scenes with people with masks on their faces? It has a mix of dystopia and utopia, but I feel like everything is somewhat utopian. Even in dystopia, I want people to feel better. There must always be a ray of hope, even in really dark stories. “.

One thing Miller learned from the first series was starring in the comedy. When Love, Death and Robots was released, the order of the short films changed according to the subscriber. This is also something that only Netflix could do at the time compared to others. The distribution model attracted a lot of attention, and Miller said that although Netflix never shared the audience figures With him or his team, he did learn to lead with comedy, not some of the bolder shorts.

“Over time, I think it would have been better if we lured them in with something like comedy instead of challenging them from the start.”Miller said. “That was the most important lesson we learned while on Netflix.. It’s such a cool technology that you can really watch with a small focus group and test that concept. “.

Another key benefit of being on Netflix is ​​the tantalizing possibility that Miler and Nelson can do even more with Love, Death, and Robots using the technology available to them. Could Love, Death and Robots have their own interactive special like Black Mirror: Bandersnatch? It’s a bandwidth issue, according to Miller.

“There are some interesting things that we can do that they are not so narrative driven and what I would love to do “Miller said. “But I also don’t want to lose our focus on the narrative if we do that.”.

The good news for fans is that Miller and Nelson don’t plan to end the series anytime soon. Work is already underway on volume three and, if Netflix signed tomorrow they would have enough stories and ideas to start with a fourth volume milled said. The idea of ​​continuing, and going even further, “we can get even better stories and give people more of what they want is a great journey”Nelson added. The duo you have no plans to stop working on your programas long as Netflix continues as well.

“Why would we stop doing this as long as they let us keep doing it?” Miller asked. “I love animation and I love animators. They are kind of a unique breed. It is a real honor to be able, as Jennifer said, to bring these people the project they never thought they would get.. It’s really like an ‘extraordinary Santa Claus’ moment..