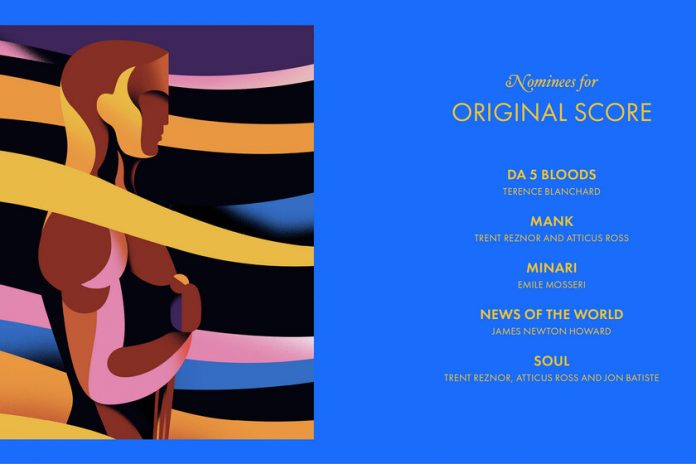 Next April 25 we will meet the winners of the ninety-third edition of the Oscars. The winners will be chosen thanks to the vote of all academics, a process that, it should be remembered, is not the same employee when choosing the nominations.

In the case of the category of best original soundtrack, It is the Music Branch (musical branch of the academy, that is, those composers, musicians and lyricists with the right to vote) who choose the finalists for the Oscar.

That is why the nominations have always been more important and relevant to me than the winners; It is a recognition obtained thanks to your own colleagues, made evident in some of the mentions over the years (the case of Alex North or Thomas Newman, composers respected by film music composers but who fail when it comes to be chosen to win the award).

On this occasion, we have a eclectic selection of scores, which although it is far from representing the best of the original soundtrack in 2020, does deserve respect and consideration.

The score that should get the award is’ Da 5 Bloods. Brothers in Arms’, composed by Terence Blanchard. Nineteenth professional collaboration with the director Spike Lee, Blanchard is finally enjoying the merit that his work deserves. You can listen to it on Spotify.

After a (late) first nomination thanks to ‘Infiltrated in the KKKlan’ (‘BlacKKKlansman’), Lee’s new film allows him to unleash his knowledge in the key of jazz (remember that Blanchard is one of the highest rated trumpeters of recent times) to transfer it to an orchestra with an Americana tone. Get a narrative staging that is sometimes reminiscent of the longed-for teacher Jerry Goldsmith and culminates in moments of triumph, which may recall the best John Williams.

It sounds stale, to a type of music that is rarely found in the movies these days. This is a score worthy of admiration and that has the problem of sharing footage with a series of songs by Marvin Gaye that do not coerce his sense of heroism.

Additionally, this work by Blanchard has garnered the film’s only nomination for the Academy Awards. This data is interesting to say the least and leads to the idea that the Music Branch was very clear from the beginning that this score deserved to be considered one of the 5 of the year.

The works that have only deserved one nomination in this category are usually works of enormous quality that demonstrate that a score can stand out despite the accompanying film, is the case of ‘El Bosque’, ‘Resistencia’, ‘Los Girasoles’ or ‘El Violín Rojo’. 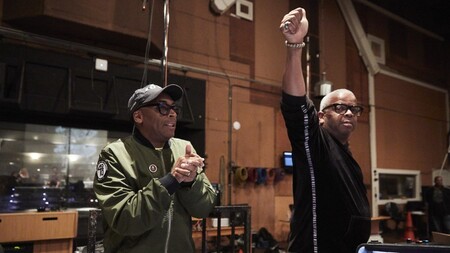 Except for the last title, they do not usually come out victorious since they do not have enough support to win the award, since this award is usually received for other circumstances (as an accompaniment to the best film of the year, as a drag from other technical awards or artistic and the usual as a consolation, especially to nominees for best film).

READ:  My Hero Academia 5x01 Review: the best filler ever?

Rare is it that a film wins only in the category of best original soundtrack. In any case, it is extraordinary that the Academy has recognized Terence Blanchard as’ Da 5 Bloods. Hermanos de Armas’ is one of the best film scores of recent times.

The forecast: ‘Soul’ will win

Everything indicates that the winner will be ‘Soul’, work already commented when reviewing the most relevant soundtracks of last year. Recall that the original score of the latest Pixar film is written by both the duo Trent Reznor & Atticus Ross as for the jazz player Jon Batiste but that they did not work together to develop it.

This fact seemed that it was going to take its toll at the time of the nominations, through a disqualification (something that has happened previously with soundtracks of this type) but the Academy has seen with good eyes (and ears) the musical work, and the soundtrack has ended up becoming The favourite after winning at the Golden Globes, the BAFTAs and the Critics Choice, something that had not happened with an animated film since ‘Up’, from the same studio.

‘Soul’ is getting these awards because it has an advantage in its favor and that is the jazz genre has an important narrative weight within the film. Still, the work of the soundtrack is lame since you have two parties working each on their own.

Reznor & Ross create a strange electronic pastiche for the sequences that take place in the afterlife (or more here) and Jon Batiste enhances the jazzy nature of the protagonist with short and dynamic notes of jazz in the real world. You could say that ‘Soul’ is being rewarded for a music that on certain occasions it is diegeticIn other words, it is heard by the characters in the film and it does not belong in the score.

And is that One of the best ways to win the Oscar for best original soundtrack is usually to accompany a movie where the music is relevant.See the aforementioned ‘The Red Violin’ or ‘Around Midnight’ by Herbie Hancock (a score full of pre-existing themes that scandalously took the award away from ‘The Mission’).

Everything indicates that Reznor & Ross will win their second statuette after ‘The Social Network’ and Jon Batiste (who is also the leader of the famous television show ‘The Late Show with Stephen Colbert’) will enter this select club of winners. 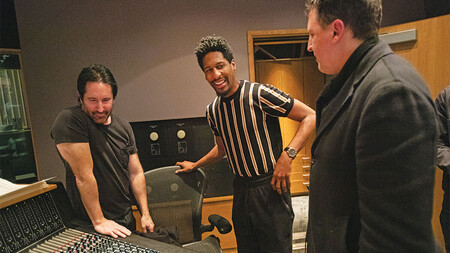 Much more interesting would be to award Reznor & Ross for their other Oscar-nominated score: ‘Mank’. For this work, both artists have had to leave their comfort zone and with the help of the orchestrator Conrad Pope and the saxophonist And Higgins, have recreated the world of 1930s Hollywood 20th century.

Composers abandon electronics and have produced an orchestral soundtrack whose starting point is Bernard Herrmann (composer of ‘Citizen Kane’) but that ends unfolding through a beautiful romantic waltz and a series of jazzy tunes. It is evident that Reznor & Ross lacks tables to be able to develop this score narratively and although the final result is irregular, there is no doubt that this is a soundtrack worthy of admiration and that it shows that they are capable of surprising in other areas and genres .

However, the score has little chance of winning as they are competing against themselves for ‘Soul’. It is often said that when an artist is nominated twice, it is more difficult to win because the votes are divided. From my opinion, I think this is very rare to happen, since the voting tickets for the best original soundtrack do not include the names of the candidates and also the composers John Williams and Alexandre Desplat have won, in 1977 and 2014 respectively, even with this circumstance.

James Newton Howard is one of the favorite songwriters of recent times, especially as a result of his collaboration (now non-existent) with M. Night Shyamalan. He is a solvent, interesting film music composer with a professionalism and elegance that is available to few. For this reason, it is still surprising, and very much, that at this point in the film, the composer still don’t have an Oscar for his good craft.

With ‘Noticias del Gran Mundo’ he has a new opportunity, the ninth of his career (two of them were for best original song) but everything indicates that it will go empty. Newton Howard is one of the most loved and respected composers in the Music Branch and sometimes he does not need a successful film to see his work rewarded (the previously mentioned ‘El Bosque’ or ‘Resistencia’).

With permission from ‘Hidden Life’, ‘Big World News’ is his most important job in years and it has ended up getting nominations even for the Golden Globes and the BAFTA (something unusual since Newton Howard is not so relevant for these awards).

Personally, it seems like a correct work but it falls a little short within the capacity of the composer. His music for the end credits are extraordinary but I wish the rest of the score had been just as risky when it comes to musicalizing the western and the adventure, something that the composer has previously done with better results in works such as ‘Oceans of Fire’ or ‘Wyatt Earpp’, fundamental soundtrack of the genre in the 90s.

READ:  What Are The Principles Of Diet Planning?

Many wonder how it is possible that James Newton Howard is going to go home empty again and the answer is obvious: needs a major award-level movie to win. He has the respect and professionalism to do a good job and be nominated but he needs a powerful film capable of generating conversation on the subject of awards, something that the last candidate this year does have.

The great rival of the Pixar and Disney film

‘Minari. History of my family ‘of Emile Mosseri is a atypical soundtrack, strange and that has reached the nomination pushed by the stupendous potential in terms of awards that the film has had.

Mosseri must be the first surprised to have landed an Oscar nomination, since this very young 35-year-old composer, Berklee graduate and leader of an indie music band, has hardly worked in film. This is his fourth film and it develops an interesting potential that I am proud that the Music Branch has received and awarded a nomination.

The music of ‘Minari’ contrasts sharply with the idyllic tone that Lee Isaac Chung seeks to capture with his images. This is an atmospheric soundtrack in new age tones that can feel cool and cozy at the same time. It even develops an alienating tone within its seemingly simple instrumentation. It is a very suitable sound for what the narrative of the film intends.

Mosseri builds his score from two beautiful songs sung in Korean that return us to a sound more typical of the 80s / 90s, similar to the works of Angelo Badalamenti at that stage.

This is a curious soundtrack and it has been fortunate to be accompanied by a film that has enormous potential in terms of awards, hence its recognition since in other circumstances, it would surely have gone unnoticed. Right now, it is the only alternative to contesting ‘Soul’ for the award in this category.

It should be noted that other works that were on the shortlist such as the extraordinary ‘Blizzard of Souls’ by Lolita Ritmanis have been left out, while works as enjoyable as’ The Call of the Wild’ by John Powell or ‘The Incredible Story of David Copperfield ‘by Christopher Willis, weren’t even present on the list.

It is worrying that, more and more, the same names and titles are repeated in the different awards. She longs for the times when, despite having fewer ceremonies, there were more opportunities to get creative with the music on the soundtrack.