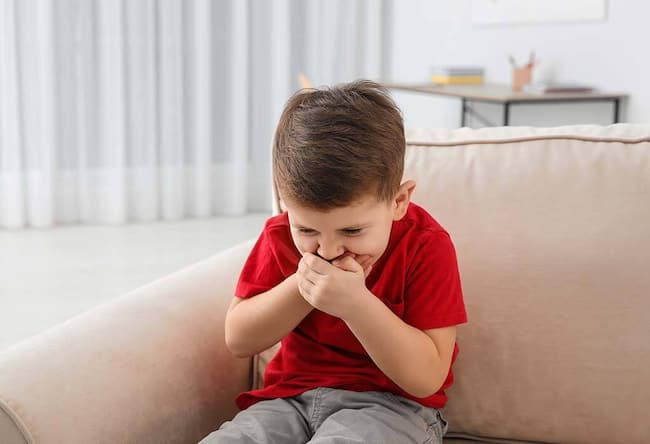 Causes of Vomiting in Children

Children may vomit for many reasons, including stomach flu, food poisoning, allergies, or intolerance to certain foods. When vomiting starts immediately after eating or drinking, it is often due to allergies or food intolerance.

The most common cause of prolonged vomiting in children is food poisoning. Children are vulnerable because their immune systems are not fully developed, and they have smaller bodies than adults, so the same quantity of toxins affects them more quickly.

Food poisoning is usually caused by ingesting bacteria such as E Coli or salmonella but can also be caused by viruses (such as norovirus). If you suspect your child has food poisoning, seek medical attention urgently; if treatment is started early enough, most cases resolve within 24 hours.

Young children (up to five years of age) and teenagers and adults, in particular, may develop vomiting together with diarrhea when they have the stomach flu (also called gastroenteritis). The virus that causes stomach flu can be passed from one person to another via contaminated food or water; it also spreads through direct contact with an infected person.

Thorough washing of hands after handling an infected child is recommended. Although children with gastroenteritis recover spontaneously without treatment, most cases resolve within a week. Supportive care such as offering plenty of fluids and pain relief for vomiting can help.

Vomiting during childhood migraines typically starts at puberty and lasts longer than adults. Children with migraines may also experience abdominal pain, nausea, and sensitivity to light or sound.

Children can develop an allergy to something they have previously eaten without feeling any adverse effects. The next time they eat the same food, their bodies will mistakenly register it as a foreign invader, causing the immune system to respond by producing antibodies called immunoglobulin E (IgE).

Some children have difficulty digesting lactose, the natural sugar found in milk, and other dairy products. Once diagnosed by a doctor, a child with this intolerance can avoid these foods or drink special milk that doesn’t contain lactose. If your child has vomiting after eating dairy food, talk to your doctor about whether they may have an intolerance so you can manage it effectively.

In malabsorption syndrome, the body’s ability to absorb nutrients from food is impaired because there is some problem with digestion or absorption of specific nutrients such as fats, vitamins, and carbohydrates through the gut wall into the bloodstream. Causes include cystic fibrosis, chronic intestinal inflammation, and celiac disease; the malabsorption syndrome may present alone or be associated with other syndromes such as diabetes.

Chronic illnesses such as autoimmune diseases like Crohn’s disease and ulcerative colitis can cause vomiting in children. A doctor should see children who experience persistent vomiting because these illnesses can also affect growth and development if left untreated.

syrup to stop vomiting in a child:

give syrup of ipecacuanha and potassium bitartrate in dosages of 1-1/2 ml three times a day for one day.

This is another option available as medicine to stop vomiting in a child. Ipecacuanha and Potassium Bitartrate are both emetic drugs – they cause vomiting – and this medication will only work if the child has not vomited yet (i.e., it can only be given before the vomiting starts and is most effective when given before the first episode).

It may also help if repeated episodes of vomiting occur, but these medications will not make an ongoing vomiting problem any better or worse; therefore, you should ask your doctor whether this treatment is appropriate for your child.

This is often useful to treat mild cases of stomach flu because it should work for situations where other treatments are less likely to be successful.

It should start working in around 3 hours (sometimes sooner) and last about 10 hours. This offers enough time to complete an initial course of treatment if your doctor or emergency room recommends it.

However, do not give this medicine more than once every 8 hours. If the vomiting does not stop after using the one-half solution, use one complete solution (1 ml) (see above). Remember also that liquids will probably need to be given by mouth if the child has become dehydrated due to their illness; call your doctor for advice on how much fluid they could take safely without developing diarrhea.

This will be most successful in stopping the vomiting if it is given early on before too much medication has been taken or if more traditional treatments have failed.

Uses of syrup to stop vomiting in a child:

Some practitioners advocate that Ipecacuanha and Potassium Bitartrate would be very helpful in treating pregnancy-induced nausea when used together with B6 (pyridoxine) or vitamin C. Still, studies show the evidence for this is feeble.

This remedy will not help prevent morning sickness; its usefulness is limited to use during an ongoing episode of vomiting (i.e., only when the vomit has already started). The medicine can also cause side effects like headaches, heartburn, abdominal pain, diarrhea, allergic reactions, or paralysis.

Ipecacuanha is an emetic drug that will cause vomiting if it has not been vomited already. If the child has vomited recently (within 2 hours), there is no reason for this medication to be given again because it will have no effect. Therefore, this product should be considered only when its use can prevent continued vomiting.

This means Ipecacuanha and Potassium Bitartrate are most likely to work when used early in a day’s illness (i.e., before too much time has passed since the first episode of vomiting began or when other treatments might not still be effective).

Fever and vomiting in a toddler:

Give a dose of glucose or honey to a child with fever and vomiting.

Glucose/love is easily digestible, provides energy, and has a soothing effect on the stomach.

If you have some glucose at home, it might be helpful in case your child vomits frequently.

Take a fluid ounce of glycerin and add one teaspoonful of lemon juice to it.

Add water in equal quantity to this mixture. Mix well and feed this solution with a spoon or dropper every hour until symptoms improve entirely. This remedy works wonders when the following symptoms are seen:– chronic persistent cough that may lead to vomiting; underweight due to loss of appetite caused by any regular; nausea and vomiting after taking medication.

Sour juices can help in vomiting in babies and young children. You should chew a lemon thoroughly to extract the juice, mixed with water or cooled boiled milk. The fluid can also be taken in this form without being diluted in water/milk.