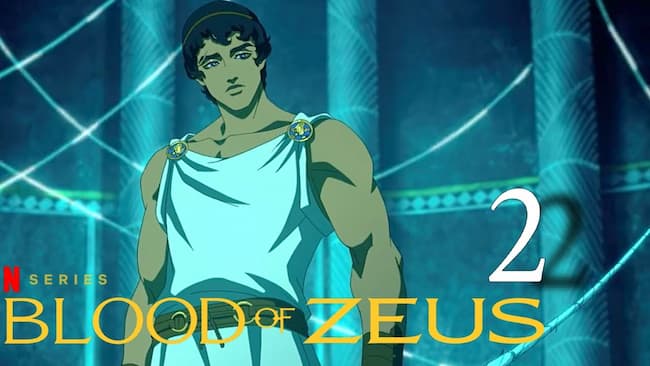 It is not hard to gulp the fact that society was and will always remain fascinated and obsessed by Greek mythology.

After all, it teaches us the most valuable lessons and influences society in subtle yet deep ways.

Charley Parlapanides and Vlas Parlapanides were creative and thoughtful enough to write and convey the not-so-popular, yet powerful stories of ancient Greek mythology by directing a series called, “Blood of Zeus”.

The first season which most of us binge-watched, was aired on October 27th, 2020, on Netflix.

It follows a short tale of Greek mythology and includes various famous Greek gods and their stories.

When is it released?

The makers of the series claimed that once they get enough viewership, they will bless their audience with another season very soon to conclude the planned plot in the most interesting manner.

So, guess what, on December 3rd, 2020, Netflix tweeted the release of its 2nd season.

Going by the facts and what we know, the most awaited season 2 is going to be released on the same platform in either late 2022 or early 2023.

Although there is no official release date, we have to wait for the more attractive upcoming season to lure out the mystifying theories going inside our heads.

Information about the cast?

It is no surprise that voice artists play a major role in making the series a hit because their voice is what the audience will be listening to.

Their expressions build the emotion of the tale. We’re sure that the makers wouldn’t be a disappointment and bring all our favorite voice artists back.

Albeit there’s no official information provided for the comeback of the same artists, we expect the main one’s from last season like Derek Philips as Heron, Jessica Henwick as Alexia, Elias Toufexis as Seraphim, Adam Croasdell as Apollo, and Matthew Mercer as Hermes to definitely be there.

In the final episode of the last season, we see that Hera (Claudia Christian) was terribly injured, and Zeus (Jason O’ Mara), her husband, sacrificed his life to save her.

Now it won’t come as a shock to those who’ve watched the first season that in a universe where immortal gods are present and magic is all around, there’s a slim possibility of a resurrection, and it’s going to be thrilling as hell.

Yet another powerful character who made an appearance in the last season was Hades (Fred Tatasciore), god of the underworld.

He was the son of Titan Cronus and Rhea. He was loved by each one of us, so makers might decide to bring him back in the next most awaited season.

Expectations from the upcoming season?

The writers say that the first season, which no doubt turned out to be a great success, will be the foundation for the upcoming season.

In accordance with an interview, the expectations are that the stories of Heron and Seraphin will be continued in the next season.

In this very interview, the writers also stated that there is a 20 pages outline for season 2 with the stories of Zeus, Hades, and Poseidon.

It will drive us back to the time of the division of theory into three realms by the brothers.

Exciting news for all the admirers of Jason O’Mara is that he will return as the god of thunder and sky.

The theory says Hades and Poseidon may play a significant role this upcoming season.

We know that Zeus and Hera are no more on Mount Olympus, which means that there is a power void.

Hades planned all of it with Seraphim to get some relief from his underworld duties and to see and get some sunshine for distraction.

Heron can be a contender for the new ruler of the Olympians to fill in the power void as he fought against the giants with such bravery.

Hera’s return can be a pivotal plot point as she was not out, just weakened.

A scenario can be imagined where one can assume that the gods nominate a new ruler so that after Hera’s return, she can continue to rule.

Hades will probably try to replace the king of gods, Zeus. Since he is the king of the underworld, there is a possibility that he may be represented in some sort of antagonistic role-play or as a villain.

READ:  Controversial Statement By Jim Carrey on Sonic The Hedgehog

In the 7th episode of season 1, we got a glimpse of Alexia, a trained hero by Chiron, who was the traditional trainer of legends like Achilles and Hercules.

There was a slight presentation of her background as well, where viewers saw how she set forth herself into the Fields of the Dead, where she saw her parents as apparitions who blamed Alexia for their deaths.

So definitely, this will give some light on Alexia’s remaining story left to be told, and thus, we will get some additional information about her in the upcoming season.

Yes, since, as we all know, there is a power vacuum in Olympus, there will be an involvement of other gods who will be a part of the debate over this very crucial plot.

And since many of the audience’s beloved gods did not have much of a role to play in the first season, there are chances that they will have a more explicit role in the upcoming season.

This series is an epic display of action, adventure, and fantasy, and there are numerous ways in which conflicts can take place in the future season/s to come.

Blood of Zeus, the drama series, will continue to thrive henceforth. Check out the second season for all the baffling and mystifying theories going on in your mind as soon as it releases.

Things to Do Before Start Betting Online