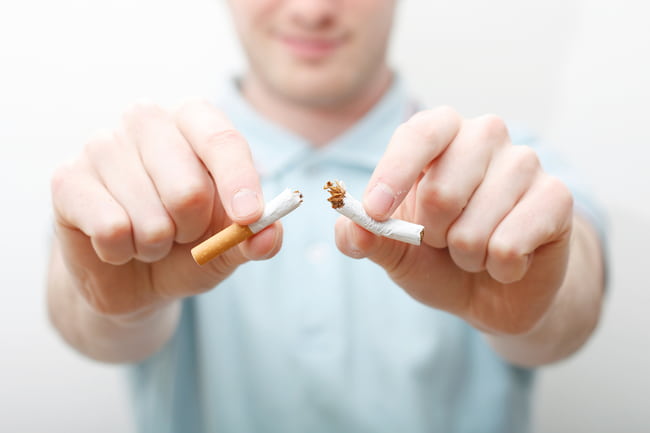 with the price of cigarettes in many countries, you can save up to $30 a day when quitting smoking!

breathe easier and get more oxygen in your body, and feel lighter and healthier than ever before!

You will quit smoking just in time for your children to grow up and not suffer from secondhand smoke.

4. Be part of the solution:

When we quit we take our place beside healthcare professionals who work hard every day helping people give up this powerful drug. Join us today!

Food not only tastes better but smells better too! Smoke affects how taste buds work so find new flavors you never knew existed before.

No white rings on tables and no yellow teeth and fingers!

Clothes and hair will smell fresh and lovely again, enjoy your wardrobe anew.

8. Save yourself from the risk of various cancers:

Giving up smoking reduces your risk of cancer by at least 50%. The earlier you quit, the greater the benefits!

Quitting smoking improves blood flow which increases the sensitivity in erogenous zones such as lips, nipples, or genitals – find out how it improves penile firmness too!

As per the Centers for Disease Control and Prevention (CDC), smoking is the leading preventable cause of death.  It kills more than 480,000 Americans every year.  It’s also a major contributor to lung cancer, heart disease, stroke, asthma, chronic bronchitis, and other diseases.  Once you quit smoking, your body begins healing itself immediately.

A study in The New England Journal of Medicine found that within minutes after quitting smoking, blood pressure drops and the pulse rate returns to normal.

A study published in The Lancet found that within 20 minutes of quitting smoking, the carbon monoxide levels in your blood drop to normal, and the heart rate and blood pressure begin to improve.    Within two days, your sense of smell and taste return to normal.

Side effects of quitting smoking suddenly:

Some people experience flu-like symptoms such as coughing, headaches, and cold sweats when they first quit smoking. These symptoms last 1 – 2 weeks on average.

Benefits of quitting smoking on the skin:

As you stop damaging your lungs with cigarette smoke, they start repairing themselves: By one year after quitting: Your lung function increases up to 30% and continues increasing for about nine years. Quitting also reduces the amount of air pollution in your lungs.  By five years: Your risk of getting lung cancer decreases by 50%.  By 10 years: Your risk of getting lung cancer is about the same as a nonsmoker’s.

Benefits of quitting smoking on the skin:

According to a study published in the journal Cancer Epidemiology, Biomarkers & Prevention, quitting smoking 10 years or more before cancer-related surgery can reverse or minimize some of the damage that tobacco inflicts on the body.

Side effects of quitting smoking suddenly:

Other side effects of quitting smoking include coughing, shortness of breath, fatigue, and depression. Of course, these may be temporary for some people. Others quit after suffering a health complication caused by smoking or seeing a friend or family member suffer because of the habit; this is more likely to resolve quickly.

Quitting cigarettes is hard enough. If you’re using nicotine gum or patch to help yourself through it, quitting the gum might be even harder. Studies have found that over time, people who quit smoking but continue using a nicotine replacement therapy tend to relapse back into smoking.

Another study presented at Neuroscience 2013 by Michelle Sciarrino, MD, an assistant professor of medicine at Boston University School of Medicine, followed 487 former smokers for up to 12 years after they quit smoking with either bupropion (Zyban) alone, nicotine replacement therapies alone, bupropion plus nicotine replacement therapies or placebo.

After eight years, only 7.3% of those who quit smoking with the help of both medications had relapsed to smoking; 18.5% of people who used either medication alone had done so, and 31% of those who got the placebo had smoked again, reports Sciarrino.

benefits of quitting nicotine vape:- “Nicotine is one of the most addictive substances that we know,” said Dr. Steven Schroeder, a professor at University of California San Francisco’s School of Medicine and director emeritus of Smoking Cessation Leadership Center at its medical center.

The nicotine in your body will decrease by half within two hours of your last smoke. Within 24 hours blood pressure and pulse rate return to normal.

by this time, you’ll start feeling better because carbon monoxide levels in the blood will be back to normal too. That means that the heart won’t have to pump as hard to get oxygen throughout the body – which can reduce your risk for heart disease, heart attack, stroke, and peripheral vascular disease (a circulation problem). within a couple of weeks, you’ll be able to taste and smell better.

within three months to a year, your circulation improves and walking becomes easier. Within one to nine years after quitting smoking, your risk for having a heart attack falls to about half that of a smoker.

READ:  Benefits of Onions and Good for the Heart

by long-term use of products such as nicotine gum or the patch, you can lower your blood pressure and pulse rate even more rapidly than in just a few weeks – lowering your risk for a stroke too in a shorter period.

there is no significant evidence that quitting smoking will restore fertility in men. However, it has been found that women who quit have better chances of getting pregnant within six months when compared with those who continue being active smokers after trying to conceive.

There is also evidence that quitting smoking can benefit people who have been previously diagnosed with heart disease. One study found that 65% of patients following coronary artery bypass graft surgery quit smoking after being given a prescription for bupropion and 3 months of nicotine-replacement therapy, while only 15% relapsed back to smoking.

Nicotine Replacement Therapy was also found to help cancer survivors stay smoke-free during radiation treatment. It has been shown that the likelihood of quitting tobacco is higher in smokers undergoing treatment for head or neck cancers compared to those undergoing general cancer treatments. In head and neck cancer patients, NRT doubled quit rates from 9% to 18%.

Quitting marijuana is not easy because it contains chemicals that interfere with your memory, judgment, and coordination. Even after you quit, it may take time for your body to recover from the changes that marijuana makes in it because of how long marijuana stays in your system (see Marijuana Drug Test Detection Times ).

The physical effects of quitting will begin after a few hours or days. Your heart rate and blood pressure will go down quickly. Within 1-3 months most people who quit using marijuana will notice their sleep is better, they feel healthier during the day, and they can smell and taste things better than before they quit (especially when smoking high-potency THC products).