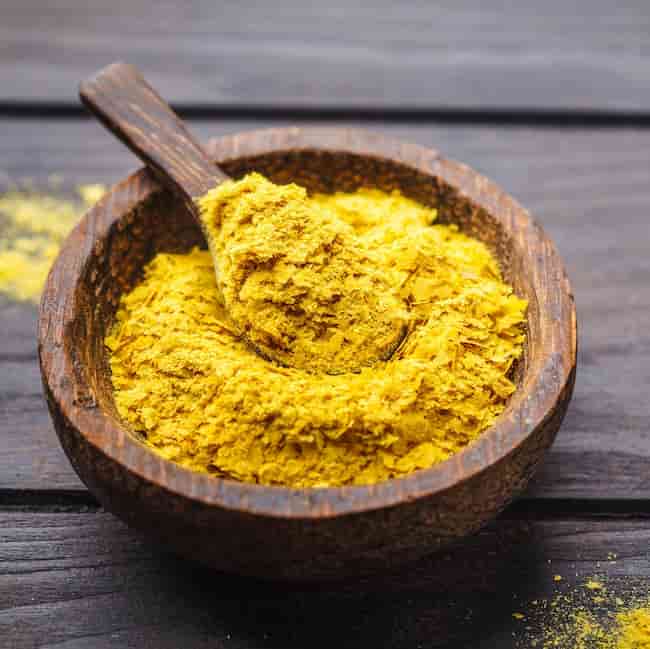 Benefits of Nutritional Yeast, How to eat nutritional yeast

Yeast is a natural source of protein and B-complex and hence provides energy and nutrition to the body. Vitamin-B fortified yeast, in particular, contains thiamine, riboflavin, and niacin that promote cell metabolism and also help produce antibodies responsible for fighting infections. When added as an ingredient in cooked food or used as a dressing, yeast can be helpful in strengthening the immune system.

People on low carbohydrate diets can include nutritional yeast as it has very minimal carbohydrates and is also high in protein and fiber to help fill you up. Studies have shown that people who eat foods rich in chromium and fiber, such as nutritional yeast, lose weight faster than those without it.

The active ingredient in nutritional yeast called “ergosterol” is the precursor of Vitamin D2 (ergocalciferol). When yeast is exposed to ultraviolet light, it synthesizes this Vitamin D2 that is needed for calcium absorption in the bones.

Studies have shown that women who do not include enough calcium in their diets are at higher risk of osteoporosis later in life. Women can use nutritional yeast as a dietary supplement to help control menstrual cycles.

READ:  What is a Woe Diet

Yeast is rich in selenium, the antioxidant mineral that helps protect cells against the damaging effects of free radicals. Free radicals are harmful molecules that accumulate in body tissues and can cause heart disease, cancer, arthritis, senility, and other chronic conditions if not neutralized by antioxidants. The best sources of selenium are Brazil nuts, tuna, poultry, sunflower seeds, etc.

Youth is a live yeast culture that helps provide healthy levels of friendly flora to your digestive system to aid digestion and boost immunity by strengthening the gut wall.

Nutritional yeast is a great source of minerals like iron which are an integral part of hemoglobin formation. Thus, regular consumption of nutritional yeast improves the strength and growth rate of hair or nails.

Nutritional yeast contains selenium that is rich in antioxidants and helps in preventing low-grade inflammation in the body. This, in turn, lowers the risk of developing cancer of the bowel or lung.

Yeast is a powerhouse of enzymes that promote proper digestion and absorption of nutrients from the foods we eat. It also helps prevent constipation by keeping your stools soft and bulky, which facilitates their passage through your digestive tract.

11. Prevents the growth of yeast infections in women:

Yeast or Candida Albicans is a type of fungus present normally in the mouth, intestinal tract, and vagina as well as on the skin without causing any harm. However, when this fungus starts multiplying rapidly due to changes in temperature, pH level, or immunity levels, it gives rise to yeast infections. Studies have shown that regular consumption of nutritional yeast can prevent the growth of Candida Albicans and hence, help in preventing vaginal yeast infections.

Nutritional yeast is a good source of folate or folic acid which plays an important role in the formation of red blood cells in the body. Studies have shown that folic acid supplements are very helpful for people with high blood pressure or pre-hypertension, as it helps reduce the risk of heart diseases significantly.

When on a low carbohydrate diet, people often feel hungry due to a lack of energy. Nutritional yeast is a viable alternative that can be included in their meal plans as they have very minimal carbohydrates and are also high in protein and fiber. Nutritional yeast also contains chromium that helps in regulating blood sugar levels, which is especially helpful for diabetics.

Cholesterol can be lowered by dietary measures because it is made by your body from the food you eat. Nutritional yeast has been found to reduce the amount of LDL or bad cholesterol in your body while increasing HDL or good cholesterol in the blood.

A recent study has shown that a yeast extract known as Biolex-Zym, which is a formulation of nutritional yeast, can be used as a potential treatment option for sickle cell anemia patients due to its anti-inflammatory properties.

How to eat nutritional yeast:

1. sprinkle on food while cooking or eating.

I often add it to pasta dishes, soups, stews, and salads.

2. for breakfast toast with margarine and nutritional yeast flakes (and perhaps a banana).

4. in casseroles, bakes, and nachos (sprinkle on top).

READ:  Benefits and Side effects of Zoloft

5. sprinkle boosts the nutritional content of any dish – drinks, desserts, or otherwise!

6-.  use it as cheese replacement where possible to make vegan cheeses.

7. some people even enjoy putting it on their sandwiches or toast with oil and garlic for a savory yeast spread.

8. nutritional yeast goes great with many of the vegan spreads, try swapping your regular one next time you make a sandwich to experience the difference.

9.  add to vegan ice cream for a cheesy effect.

10. use it as the cheese in any vegan lasagna recipe!

11. try sprinkling some on your popcorn next time you make some, what’s better than nutritional yeast & salt?!

12. add it to roasted veggie dishes for extra deliciousness

13. many people use it as a cheese replacement in casseroles and bakes.

While nutritional yeast is a popular additive to vegan foods, not all brands are created equally.  Some yeasts can be bitter or add an unwanted aftertaste to dishes.  These brands include Bob’s Red Mill and other health market varieties – avoid these!

There are however some brands that make a great-tasting flaky powder.  Some of the best brands to use include:

-Sari Foods in Canada  (this is my favorite)

-Vegourmet in the USA  (not quite as good tasting, but still pretty darn good).

-Galaxy Nutritional Foods in Australia  (this one is also excellent).

nutritional yeast side effects are few and far between.  It is safe to eat in large amounts, but some people have reported intestinal gas production after eating too much nutritional yeast.

Other than this, there are no documented health risks associated with the consumption of nutritional yeast.  Nutritional yeast does not normally result in an allergic reaction, but just in case always do a skin patch test before you eat it in large quantities.