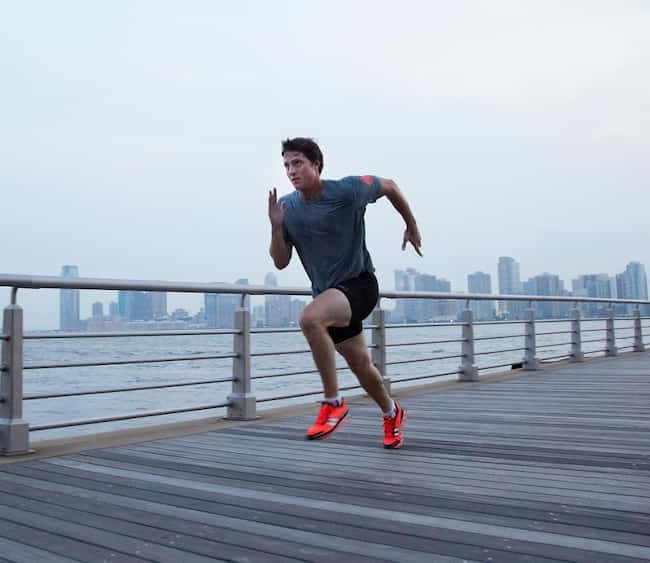 HIIT or high-intensity interval training is a neat way to squeeze in a workout, as it’s short but intense. HIIT workouts take just minutes and get you fit fast!

This method of HIIT starts with a warm-up for three minutes. Then go as hard as you can for 30 seconds, followed by a 90 second recovery period – whether it’s walking, jogging on the spot, or whatever you fancy. Repeat this process at least ten times, which means your workout should last around 18 minutes.

This approach has been shown to boost fitness levels similar to longer workouts lasting over an hour. It also improves aerobic and anaerobic power, which can also help sports performance.

This method is excellent for improving endurance fitness. Start by doing a five-minute warm-up followed by eight intervals of 30 seconds at 90 percent maximum effort, with 60 seconds of recovery between each one. After the eight sprints, cool down for three minutes, and you’re done.

The total workout will only last 27 minutes, so it’s perfect for fitting in before or after work or while you’re watching TV! This type of HIIT has been shown to improve aerobic capacity just as well as long-duration cardio activities like running – but obviously without all that time spent pounding the pavement! Tabata

HIIT takes things up a notch even more than the previous two methods, if that’s possible! First, it involves a warm-up, but the next stage is 20 seconds of maximum effort followed by 10 seconds of rest for four minutes. Then you have a two-minute break and repeat the whole process another three times, so that’s a total workout time of just under 28 minutes.

This has improved aerobic fitness even more than the methods above. In addition, it also enhances anaerobic power, which is necessary for activities like lifting weights or sprinting.

Studies show it can also be particularly good at reducing belly fat because, during high-intensity exercise, your body uses more stored fat as fuel than lower-intensity activity.

If you like running, this is the HIIT workout for you! A warm-up of five minutes is followed by 30 seconds of maximum speed, 90 seconds of recovery, and then repeat ten times.

This last stage is only four minutes long, so the total workout time is just 24 minutes – perfect if you’re short on time but still want to get fit! It’s also been found to improve aerobic fitness in overweight people and traditional endurance training methods.

A study compared two men who did traditional aerobic training with another man who trained using interval training (which included high-intensity exercise). After ten weeks, it was found that both types of training improved cardiovascular fitness equally well. Although HIIT workouts are shorter, they involve strenuous activity, making them so effective.

READ:  In Developed Nations, Which Nutrients Are Most Apt to Be Lacking In a Child's Diet?

–  Higher risk of injury due to lack of warm-up. For example, if you go too hard too early, you could tear a muscle or pull a ligament. The key is to start at a lower level and gradually increase intensity.

–  It can be mentally challenging to push yourself so hard for such a short amount of time – but remember, it’s only for four minutes at a time! Break the session down into smaller chunks if you find it too intense. For example, make one 30 second sprint followed by two 15 second ones with 45 seconds recovery in between. Repeat this three times to equal just four minutes of high-intensity exercise.

HIIT training can cause a reduction in muscle size and maximal force production. This happens because the high intensity of the exercise causes a buildup of hydrogen ions, leading to acidosis, which has been shown to affect protein degradation negatively and thus muscle growth. The only way to avoid this would be to reduce your exercise intensity, which defeats the entire purpose of HIIT training.

HIIT exercises are very intense exercises that should not be done by beginners or people who are out of shape. Because they are so challenging, people can push themselves too far while doing HIIT work, resulting in overexertion and injury.

Some exercises like jumping rope, sprinting, or plyometrics are inherently risky, and HIIT workouts put you at risk for injuries like pulled muscles, fractures, dislocations, etc… These risks make HIIT workouts unsuitable for people out of shape or new to working out.

4) Dependency on the equipment used during the workout:

If your gym does not offer many different HIIT machines (bikes, rowers, etc.), you’re limited in the number of exercises you can do. This could be a problem if your routine calls for practices that require certain pieces of equipment that aren’t available or if you take time off and can’t exercise for a while and lose your conditioning, you’ll need to spend some time reestablishing it before resuming your HIIT sessions.

Because the intensity level is so high during a HIIT workout, you will find yourself gasping for air and pushing yourself as hard as possible. Unfortunately, the body’s natural response to this is increased lactic acid production, which causes fatigue.

When doing low-intensity exercises such as jogging or bicycling, the lactic acid does not accumulate in the blood because the activity is too slow to cause its production. So even though your muscles are working harder during these activities than they would with HIIT training, these low-intensity workouts don’t feel as tiring.

HIIT has been scientifically proven to be a very efficient form of exercise for improving aerobic fitness and raising the anaerobic threshold, which means that it will allow you to run faster and longer without getting tired. In addition, because it also improves the muscles’ ability to utilize oxygen more efficiently, HIIT should lead to better overall results than other forms of training.

For instance, you won’t need as much rest time between sets when doing resistance exercises after a few weeks of HIIT workouts because your body will become so well conditioned and capable of handling high levels of physical demand.

One study found that trained cyclists experienced a 32% increase in their cycling economy and decreased oxygen consumption and utilization after performing HIIT workouts for four weeks. The same study also revealed that the cyclists’ peak power output was higher after the training period – another benefit of HIIT because it helps you to go faster and harder during your workouts.

HIIT is much shorter than low-intensity endurance exercise or resistance training but provides many of the same benefits, such as increased aerobic capacity and better conditioning; therefore, it will save you time when doing your workout.

For example, studies on high-intensity bicycle sprints lasting only 5-10 seconds improved the participants’ cardiorespiratory fitness by about 20% more than the control group who did endurance exercise over 40 minutes.

According to research, HIIT is referred to as “exercise in a bottle” because it burns far more calories and raises your metabolism for longer after you’ve finished exercising compared to low-intensity exercise or resistance training.

This would be beneficial if you are looking to lose weight because the after-burn effect could help you burn even more calories while at rest during the day, which would help speed up your fat loss results.

The great thing about HIIT is that no extra equipment is necessary – all you need is enough space to move around freely and maybe something to wear if the weather is too hot or cold. This makes it very convenient because you can do HIIT training anywhere at any time so long as you have enough space to lift your arms and legs.

READ:  What Is An Ova

1) Provided by many exercises:

The main benefit of doing low-intensity workouts such as long jogs or bicycle rides for 30 minutes or more is that they are easy to incorporate into your routine since so many exercises fall under this category.

Whether you choose swimming, running, bicycling, elliptical trainer, or even brisk walking – these activities will help improve your cardiovascular system immensely if done enough times per week for several months.

These low-intensity exercises are also very safe because they don’t require any special training or equipment so that anyone can do them; plus, the risk of injuries is lower than high-intensity training.

Because low-intensity endurance exercise is usually performed for a more extended period than HIIT, it may lead to more fat loss when doing cardiovascular workouts; however, this would depend greatly on the intensity and duration of the activity – which leads us to our next benefit.

Just keep in mind that if you do 30 minutes or an hour of low-intensity exercise every day, you won’t be getting maximum benefits from it. This is because when your heart rate drops so low during these activities, your body uses more lipids (fat) and fewer carbohydrates to fuel itself.

Since low-intensity exercises are much safer because they don’t require as much power to perform them, this would decrease your chances of getting injured during or after your workouts – which is especially important for those who want to increase the time & frequency that they exercise without having to worry about being hurt from pushing themselves too hard.

The final benefit of low-intensity exercise is its ability to reduce cortisol. This anti-growth hormone breaks down muscle tissue, so it’s important not to do too many high-intensity workouts in one week because otherwise, you will never grow new muscle mass.