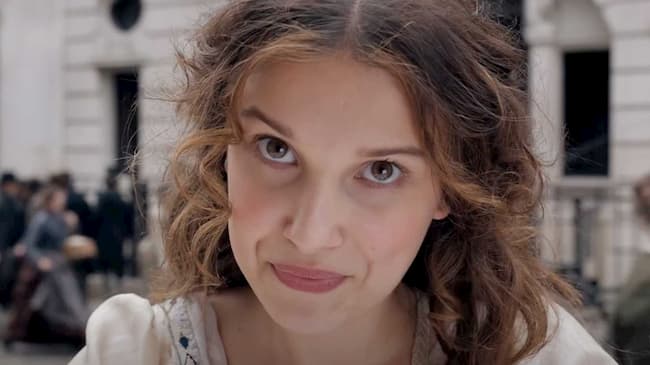 Netflix’s “Enola Holmes” starring Millie Bobby Brown is on a mission to find her mother as the new trailer reveals.

Well, it seems like the world of Sherlock Holmes is going to be a little bigger with the addition of Sherlock’s younger sister, Enola Holmes. The upcoming blockbuster movie is all about the famous legendary detective’s younger sibling whose name goes by the name of the movie itself “Enola Holmes”. You must all know about one of the most popular and thrilling series “Stranger Things”. Millie Bobby Brown who did play the character of ‘Eleven’ or ‘El’  will play the character of Enola Holmes. Fans have been waiting for the updates, so here is the new trailer of “Enola Holmes” out.

The Trailer of “Enola Holmes” Is Out Now!!

Harry Bradbeer who happens to have won two Emmys for his amazing work on Fleabag is the director. He is the one to bring back one of the lesser-known family members of Sherlock Holmes to life. The story of Sherlock Holmes’ younger sister Enola is based on a book by Nancy Springer. Fans and viewers will be able to watch “Enola Holmes” as it will release on 23 September. But if you want to have some glimpses then you can watch the first trailer of “Enola Holmes”.

The official synopsis of the upcoming movie “Enola Holmes” reads, “England, 1884–a world on the brink of change. On the morning of her 16th birthday, Enola Holmes (Brown) wakes to find that her mother (Helena Bonham Carter) has disappeared, leaving behind an odd assortment of gifts but no apparent clue as to where she’s gone or why,”

“After a free-spirited childhood, Enola suddenly finds herself under the care of her brothers Sherlock (Henry Cavill) and Mycroft (Sam Claflin), both set on sending her away to a finishing school for ‘proper’ young ladies. Refusing to follow their wishes, Enola escapes searching for her mother in London. But when her journey finds her entangled in a mystery surrounding a young runaway Lord (Louis Partridge), Enola becomes a super-sleuth in her own right, outwitting her famous brother as she unravels a conspiracy that threatens to set back the course of history.”

“Enola Holmes” also features Adeel Akhtar (The Big Sick), Fiona Shaw (Killing Eve), Frances de la Tour (Outlander), and more talented actors along with Millie Bobby Brown (Enola). This upcoming movie will surely leave the viewers and fans with the feeling of excitement running through the veins. Also, Do not miss to watch the movie premiere.