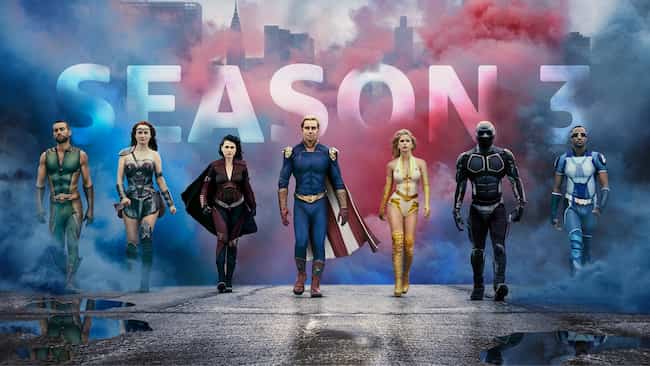 It is official. Amazon Prime Video has announced season 3 of The Boys, releasing on 3rd June. The show’s return promises comical comebacks and a lot of action for the fans.

Adapted from the New York Times bestselling comic by Garth Ennis and Darick Robertson, The Boys is an action-based drama that revolves around a few superheroes who use their power to benefit themselves.

Season 3 Of The Boys This June

The team of heroes is part of activities that have nothing to do with the typical story of saving lives. Back in 2019, the show’s first season took fans by surprise.

Well, who would have imagined that villains would appear as superheroes?  Both the seasons kept the plotline straightforward, and that’s undoubtedly what season 3 will catch up on.

The Boys season 3 will continue where it ended in the previous season. The addition of new “supes” in the team of seven will be interesting to watch. As per sources, the third season is the most dubious season of all.

READ:  the most shocking statements that Rocío Carrasco's docuserie on Telecinco is leaving us

It ought to be something coming from a show that has pushed the stereotypes of superhero stories. Eric Kripke, the showrunner for this season, says that the upcoming third season is an unexpected trail of events that even fans will be shocked to see.

The show has additional characters, including Drummer Boy, Supersonic, Crimson Countess, Soldier Boy, and Blue Hawk. The renewed season 3 will be a package of chaos, and we are living for it.

Apart from the characters, there are probably additional plots to catch up with. We will get a lot more adaptations that are far from the reference of the comic book. With so many transitions, will you be thrilled with the visuals of season 3? Absolutely. The cast, as usual, is tremendous.

In season 3, we will see Billy Butcher played by Karl Urban, who is one of the recurring actors for the show. We also have Hughie played by Jack Quaid,  Homelander played by Anthony Starr, and Starlight played by Erin Moriyati.

READ:  Godzilla Singular Point has a release date in Italy: the anime arrives on Netflix in June

Laurie Holden from The Walking Dead and Jensen Ackles from Supernatural are among the additional cast members for the third season of The boys.

Hence, you can see why the team of The Boys never disappoints. Where do we even begin about the drill of the comeback? The show hasn’t arrived, and we are already gushing over the fantastic visuals.

Season 3 of The Boys is announced to premiere on 3rd June 2022. Following the premiere, three episodes will be released on the same day. From then on, each episode will premiere every Friday till the final episode releasing on 8th July 2022.

The announcement of season 3 was made through the news show of Vought International, seven on 7. All the episodes of the first season and the second season are available on Amazon Prime Video.

The show will be globally released in available regions of Amazon Prime Video, including more than 64 countries. Fans will have a total of 16 episodes to follow for the upcoming season 3.