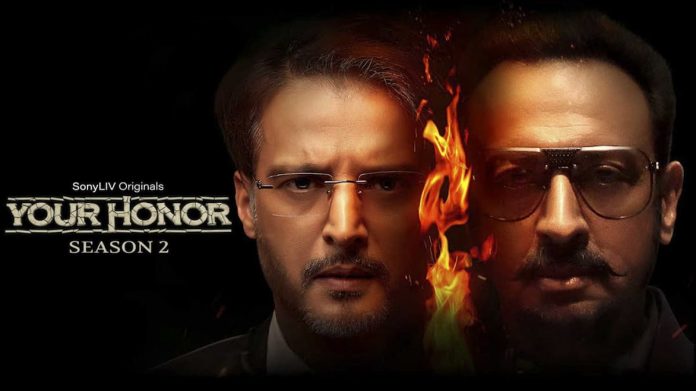 The release date of Your Honor season 2 was 19 November 2021. This series is available in two languages, Hindi and Punjabi. The series is full of action, criminal elements, drama, and thrilling experiences.

The directors of the series Your Honor are Eeshwar Nivas and Abdul Aziz Khokhar. The writers for this thrilling series are Ishan Trivedi and Neeraj Pandey.

The series Your Honor comes to us from the production house – Of applause Entertainment.

Season 1 contained ten episodes, while Season 2 had 22 episodes. The series has many well-known actors and actresses.

Each episode’s run time is around 35–40 minutes. The series is released on many platforms, including its original home network and SonyLIV. Season Two saw the entrance of two distinctive significant characters played by Gulshan Grover and Mahie Gill.

READ:  Ozark Season 3: Everything You Know About

The story revolves around Judge Bishan Khosla (played by Jimmy Shergill) and the series of events that follows an unfortunate accident. Abeer, the young son of Bishan Khosla, is arrested in a hit-and-run case. However, the hit-and-run victim is the son of a local gangster.

When his son is in the arms of the law, can Bishan Khosla be professional, or is he the father who will break any law to save his family? Will he be the upholder of the law or turn to illegal activities to save his son?

Continuing from the cliff-hanger of Season One, when Judge Bishan Khosla shoots Satnam Mudki, the season takes on more twists and turns. Judge Bishan finds himself in a severe predicament, having broken the law more than once and no longer a trusted ally of the Mudki or his circle of relatives.

Additionally, there is new trouble brewing with the appearance of another gangster Gurjot (Gulshan Grover), and his ally (Mahie Gill).

Adding to his troubles, the Judge finds himself wanted by the Taran mafia and Pandit gang, who are keenly aware of the importance and significance of getting a Hight Court Judge in their pocket, paving the way to support them in their criminal activities.

The series is worth watching for its poised tension, action, the complexity of characters, and how people change. A respected judge becoming a criminal to save his family and son is relatable in this well-written series.