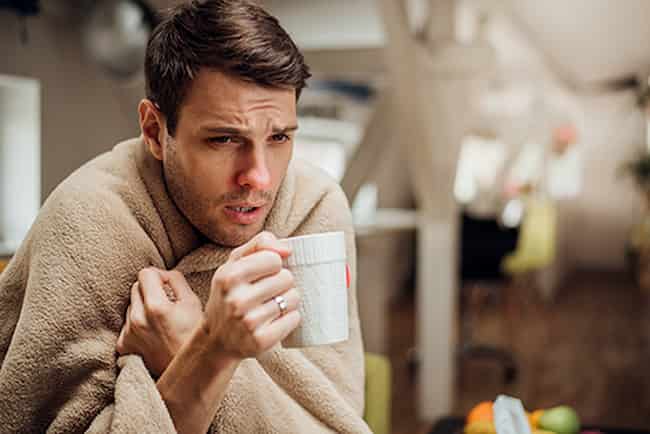 What Are The Causes of Body Shivering?

Shivering is considered to be an automatic, self-protective reaction of the body. Shivering provides heat in order to conserve energy and maintain normal temperature when faced with cold conditions. It also appears due to pain or stress caused by different medical conditions.

The causes of shivering are:

Shivering occurs even at low body temperatures like 97°F (36°C). When the core body temperature drops below 93°F (34°C), shivering becomes more noticeable. As the temperature continues to drop, it triggers vasoconstriction which reduces blood flow through your arms and legs causing them to feel colder than usual.

Nerve disorders like Parkinson’s disease, stroke, etc. are associated with shivering due to disturbance in the normal functioning of the nerves.

Seizure activity in the brain can trigger mild to intense body-shaking episodes.

Spinal cord injuries, severe head trauma, and other conditions that affect the central nervous system also cause seizures which result in trembling or shaking movements.

Thiamine deficiency is caused by excessive alcohol consumption over a long period of time is one of the most common causes for this condition. Symptoms include spontaneous nose bleeding, loss of appetite, fatigue, vomiting, etc.

Dehydration occurs when the body loses more fluids than you take in, leading to a decrease in blood volume. Dehydration is associated with shivering as it causes muscles to feel stiff and achy which leads to increased involuntary movements.

Caffeine withdrawal symptoms often lead to shaking or trembling muscle activity that’s often mistaken for hypothermia. This response is due to high amounts of caffeine being released from your cells into your system before it has been processed by your liver, dropping blood sugar levels.

Deficiency of vitamin B 6 or riboflavin is known to cause muscle weakness, fatigue, irritability along with shivering. Vitamin D, folic acid, and iron deficiencies can also lead to shivering due to malnutrition.

Severe hypoglycemia or low blood sugar that results in lethargy or loss of consciousness is often associated with shaking movements that occur out of stress causing the muscles to tighten up which leads to involuntary tremors. This condition requires immediate medical attention as it may lead to death without proper treatment.

READ:  Benefits of Fasting Until Noon

Narcolepsy is a neurological disorder characterized by excessive daytime sleepiness, brief attacks of sleep as well as sudden onsets of extreme drowsiness. During the onset of a narcoleptic episode, some people experience shivering or trembling feelings accompanied by chills before they pass out for a short period of time.

Parkinson’s disease causes muscle rigidity and tremors which results in body-shaking movements. Also known as shaking palsy, it is a nervous system disorder that mainly affects movement coordination and balance to cause uncontrollable shaking or trembling.

Tardive Dyskinesia is an involuntary movement disorder caused by long-term use of certain medications like prochlorper (Compazine), reserpine, tetracycline, etc.

The thyroid gland produces hormones that regulate the body’s growth and metabolism. Hyperactivity of the thyroid gland is called hyperthyroidism which usually makes you feel tired, weak, or breathless along with an increased heart rate.

As your temperature increases sweating becomes more noticeable which may trigger shivering to lower your elevated temperature. This temporary condition typically lasts for about three months but some people are known to experience this for as long as 10 years post-treatment of their hyperthyroidism.

Alcohol withdrawal symptoms often lead to shaking or trembling muscle activity that’s often mistaken for hypothermia. This response is due to high amounts of alcohol being released from your cells into your system before it has been processed by your liver, dropping blood sugar levels.

Physical injury to the brain can also result in involuntary muscle movements that are uncontrolled and sudden. This condition requires immediate medical attention as it may lead to death without proper treatment.

Guillain-Barre syndrome is a rare disease in which your body’s immune system attacks nerve cells for some unknown reason, resulting in numbness or weakness of the legs along with difficulty breathing and swallowing. It can also cause shivering through increased reflexes, pain caused due to contraction of muscles, etc., leading to even more severe complications.

Parkinsonism is a chronic brain disorder that occurs due to the death or breakdown of cells that produce dopamine needed by your brain to control muscle movement. It affects around 1% of people over the age of 60 and results in tremors along with other symptoms like slowness in movement, stiffness, impaired balance/ coordination, etc.

Myotonia congenita is a rare inherited disease characterized by episodes of brief but sudden muscle contractions resulting in stiffening and/or jerking movements of muscles throughout different activities. This condition does not get better with treatment so medication is only used to reduce its severity.

Dysautonomia is a rare disorder in which your autonomic nervous system that regulates involuntary functions of different organs like circulation and digestion, etc., malfunctions. This condition may result in trembling episodes as well as rapid changes in blood pressure and heart rate.

How to stop shivering:

1. by massaging your body with warm water for a few minutes to increase blood flow

2. by taking a hot shower or bath for 10 to 15 mins, allowing the hot water to run over your head and upper torso.

3. massage both sides of your neck, shoulders, upper arms, and chest with warm palms

4. lie down on a heating pad set to low or put hot packs under your arms

5. take some aspirin, acetaminophen or ibuprofen

6. have some chicken noodle soup if you are feeling nauseous

7. drink plenty of fluids to keep hydrated (avoid caffeinated beverages which can cause shivering)

8. move around slowly as long as you feel up to it

9. if none of the above remedies work, you might need medical attention

10. keep warm and avoid additional shivering as much as possible after you recover from your illness or injury.

Massage, hot showers and drinking fluids are the top remedies for stopping shivering after illness or injury. Taking painkillers might help to reduce the discomfort caused by shivers.

However, if you are unable to get relief from shivering even after taking painkillers or drinking fluids, contact your doctor.

Whilst shivering is an important mechanism for generating heat, when you are suffering from a high fever or after serious injury or illness it can be very uncomfortable.

When you get too cold or too hot, this triggers the ‘thermostat’ in your brain and nerves to signal your muscles to start shivering as a way of warming up your body by creating more energy which generates heat. This reaction slows down again once you have warmed up sufficiently.

Whilst we all normally experience mild, occasional shivering we can sometimes notice that our muscles start shuddering and shaking more severely, causing our teeth to chatter and making our body feel cold.

This happens because of a reflex action of the contracting muscles of your legs and arms in an attempt to generate heat. It is controlled by a nerve center called the hypothalamus in your brain which acts as your internal thermostat.

When you get too cold, this triggers shivering to try and create more energy by contracting muscle fibers, which generates more heat. Whilst some research suggests that shivering may be triggered by signals from the skin or even blood vessels, others show that it can happen without any external cues i.e., simply by thoughts or memories about being exposed to cold conditions.

However, when we are exposed to extremely low temperatures for a prolonged period of time, shivering can be dangerous as it uses a lot of energy and can lead to exhaustion. If we don’t manage to restore our body temperature by getting out of the cold we may lose consciousness and even die if the cold is severe enough and goes on for long enough.

When there’s a problem with your thyroid gland, you might notice that you start feeling extremely cold and begin to shiver frequently or excessively due to an inability to keep warm. It is estimated that more than 5 million Americans suffer from some form of thyroid disorder which affects their metabolism and makes them feel very lethargic.

As well as extreme fatigue, other symptoms include weight gain, headaches, constipation, dry skin, painful joints, and hair loss. If you experience any of these symptoms, get yourself checked out by your doctor.

In addition to excessive shivering as a result of thyroid problems or being exposed to cold conditions, you might also start to notice increased levels of shivering after injury or as a side effect of medication. It is important that you keep warm and avoid additional shivering as much as possible once you recover from your illness or injury.