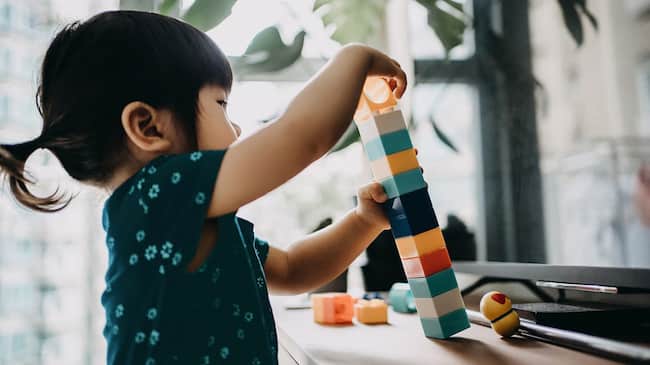 Many environmental factors contribute to the development of IQ in children. The primary function of an adult is to ensure that their child progresses in all aspects during this critical period. Hence, parents need to be mindful of their kid’s mental development at this age.

Delayed mental development in children is a concern that needs to be addressed at the earliest. Parents should not let it go unnoticed and should immediately consult a doctor if they notice any such changes in their child’s behavior or speech patterns. The earlier the condition is detected, the easier it will be for parents to cope up with the problem. We bring you some early age signs of delayed mental development so that you can keep an eye out for them:

At the age of 2 or 3, your child should be able to communicate clearly with complete sentences. If you notice that your child is not able to construct elaborate sentences, then it might indicate a problem related to delayed mental development. The doctor will be able to identify the cause of the problem and treat it accordingly.

Watch out for changes in behavior at this tender age rather than focusing on learning new skills. If you notice that your toddler is not taking interest in his surroundings anymore, he might have some problems related to delayed mental development which can hamper his learning abilities later in life too.

Take note if your child is not interested in playing with other kids of his age and prefers to stay alone. This could be a sign of delayed mental development. Your kid needs to get exposure at this young age, so make sure that you enroll him in playgroups or pre-schools where he can learn new things and interact with other children.

If you notice that your child is repeating the same word again and again instead of learning new ones, then it might indicate a problem related to delayed mental development. This habit will harm their overall growth as they will not be able to pick up complexities easily in life later on in case they do not receive treatment at the right time.

If you notice that your kid is unusually doing things, then it might indicate a problem related to delayed mental development. For example, if he is showing reluctance to do something that was previously his favorite activity, or if he seems bored while working on some creative task.

These are signs that there could be something wrong with their cognitive skills. Parents must pay attention to such behavioral changes to ensure the proper growth of their child’s mind and body.

This is one of the most common symptoms observed by parents when they feel that there is something wrong with their child’s mental development, however, this can be due to various factors other than just delayed mental development. If you notice that your child has no interest in doing something, then it might be a symptom of this condition.

7. Reversal of numbers and letters:

If you feel that your kid is not able to trace the number or letter backward, then it might indicate problems related to delayed mental development. This can make routine tasks difficult for him. For example, if he cannot write his name correctly, or if he makes errors while reading books. Your child’s intellectual skills will be hampered if the problem goes untreated at an early stage.

You should observe whether there are any delays in language or motor skills among children who have delayed mental development. If you find that they are not developing these skills at the same pace as other kids of similar age, then you should consult with your pediatrician.

If you notice that your child is unable to follow basic instructions, then it might indicate a problem related to delayed mental development. This can harm their overall growth as they will find it difficult to adapt themselves to society later on without proper treatment at the right time.

If you do not see any interesting activities or toys around your kid’s table or even if he shows less interest in playing with these things, then it might mean that something is wrong with his mental development. You must try to observe him closely and understand the reason behind this behavior change to ensure the proper growth of your child’s mind and body.

signs of developmental delay in babies:

2. She does not laugh out loud or squeal with delight when she sees you or anyone else who she knows.

3. She resists being picked up, cuddled, comforted, or caressed by other people even though she seems to want this kind of attention from you alone

4. When she cries, it is for a longer time and is more intense before calming down

5. She does not react in an emotional way to music

6. Her facial expressions are limited

8. She has little interest in the game

1. She does not babble or vocalizes

2. She does not learn to roll over

3. By the age of one, she has no single words

4. At first, she only makes sounds that are not speech-like

5. At 9 months old, her language skills are behind those of other children her age

6. Your child’s understanding is delayed eg he doesn’t seem to understand what you say

7. She understands less than other children her age

8. If she can walk, she prefers sliding on the floor rather than climbing stairs or walking up steps normally

9. Her speech is very limited

1. He does not laugh when tickled

2. He only seems to enjoy “roughhousing” when he is in a bad mood

3. If you try to reason with him when he’s angry, it doesn’t work eg you can’t get through to him

4. He shows no interest in other children his age

5. He has tantrums for no apparent reason

6. His emotions are unpredictable

7. He is easily frustrated

8. His behavior cannot be controlled

9. He demonstrates little or no empathy

1. By the time he is one year old, your child does not say any words

2. At 16 months old, her language skills are behind those of other children her age

3. She only makes sounds that are not speech-like

4. When she says words, they are not clear eg she hesitates to speak or stops in the middle of a word

5. At 9 months old, your child’s understanding is behind that of other kids his/her age

6. His language skills are below average

7. He understands less than other kids his/her age

8..She cannot use at least 50 words by the time he is two years old

9. If he can walk, he prefers sliding on the floor rather than climbing stairs or walking up steps normally

1. She does not play simple make-believe games

2. She has difficulty understanding the relationship between things and actions

3. You can’t play simple turn-taking or matching games with her

4…She doesn’t seem to understand what you say

5. Her motor development is behind that of other kids her age

6. Her memory is delayed

7. She tends to make the same mistakes again and again

8. If she can walk, she prefers sliding on the floor rather than climbing stairs or walking up steps normally

9. She counts slowly and makes a lot of errors