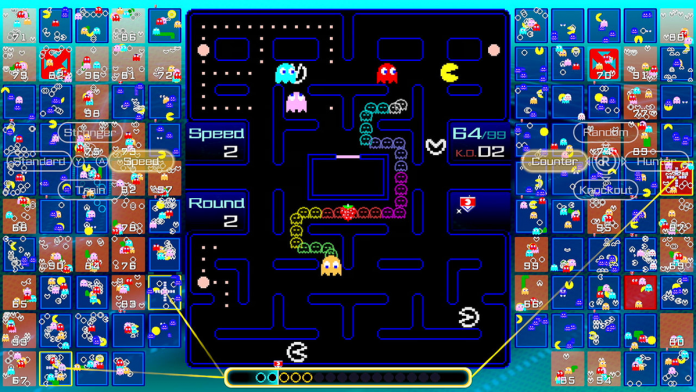 Nintendo has announced Pac-Man 99, a 99-player online Pac-Man Battle Royale game that is exclusive to Nintendo Switch Online members. It will be available on the console throughout today, April 7.

Like Tetris 99 and Super Mario Bros. 35, Pac-Man 99 is another new multiplayer version of one of the most iconic games in the history of the medium that takes the Battle Royale feature and adapts it to the elements of the game.

PAC-MAN™ is back in a new 99-PAC-MAN battle royale! PAC-MAN™ 99 goes live 4/7 at 6 PM PST, exclusively for #NintendoSwitchOnline members! # PACMAN99

Speaking of Mario, Pac-Man 99 comes a few days after “Mario’s death”, the day Nintendo made Super Mario Bros. 35 no longer playable on the console along with the withdrawal of Super Mario 3D All-Stars. of online and physical sales.

Pac-Man 99 features a traditional Pac-Man game with the added pressure of surviving 98 other players, which play simultaneously. The ghosts are still present, as are the power balls, and eating one will send ghosts to attack other players. Bumping into one of the Jammers will slow you down and make it easier for a Ghost to catch up with you and end your game. The winner of the game will be the last and only survivor.

READ:  Rent a Girlfriend: the protagonist greets The Attack of the Giants in the new official sketch

The key to victory in Pac-Man 99 is to take advantage of the sleeping ghosts. By chewing them, you will create a “Ghost Train” that will provide a lot of food. This will allow you to overwhelm the rest of your opponents.

There are also four power-ups and four targeting options, which will basically serve to launch the attacks on one or the other player. In this sense, the game works in a very similar way to that seen in Tetris 99 and Super Mario Bros. 35, so it will be easy to understand but difficult to master.

Pac-Man 99 also includes paid bonus content that unlocks classic Pac-Man modes and NAMCO themes based on Xevious, Galaga, Dig Dug, and more. To play it at no additional cost, as we have mentioned, you will need to be a subscriber to the Nintendo Switch Online service.