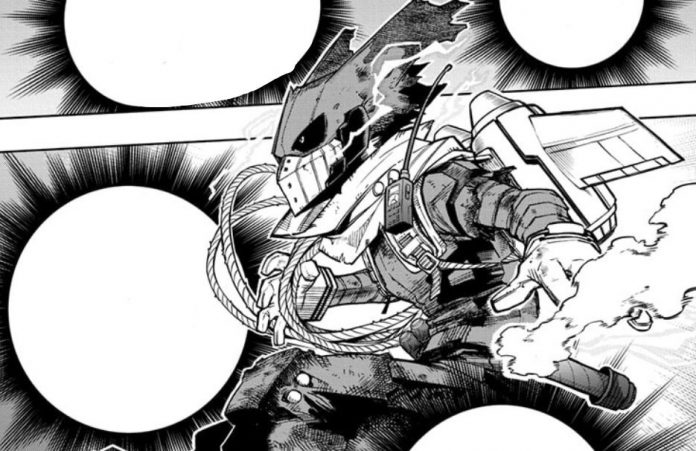 After two weeks full of speculation, it is finally time to read chapter 308 of My Hero Academia, available for free on MangaPlus. Fans remained in suspense for a long time to find out the outcome of Izuku Midroiya’s new battle, and the latest release can only have met their high expectations.

The chapter opens exactly where the last one ended, with Shindo in Deku’s arms after being saved at the last second by an attack by Muscular, back in action after escaping from Tartarus. The protagonist uses Nana Shimura’s Quirk to levitate and search for a safe place for his partner, but Muscular has no intention of holding back, and throws an entire palace at the hero. Deku notes that the antagonist has preferred a ranged attack to a melee strike, and subsequently falls back in search of Tatami Nakagame, another student involved in the villain’s attack.

After entrusting Shindo to the girl, Deku talks briefly with En, the sixth owner of One for All, and uses his Quirk “Smoke Screen”. Deku then came into possession of the fourth hidden ability of OFA, after Blackwhip, Float and Danger Sense. En tells Deku not to overly respect the Quirks, but to see them rather as part of his arsenal, to be used without restrictions to achieve his goal. Deku avoids Muscular’s blows thanks to Danger Sense and immobilizes him with Blackwhip, and then asks him the reason for his anger.

READ:  When Will “Derry Girls” Season 3 Release? Cast, Story, and Everything We Know So Far!!

After realizing that Muscular is not willing to cooperate, Deku reveals to the villain that he has understood his weakness since the beginning of the fight: Once energy is lost, his muscle fibers loosen and end up fraying, and consequently by maintaining high blood pressure it is possible to create a weak point in his armor. Muscular in anger tries to respond, but Deku launches a frontal assault and hits him with all his might, seemingly finishing him.

The chapter reveals two important details: the first is that Izuku is now fully aware of his own strength, while the second is that the protagonist is now able to use another Quirk. The character of the hero is always kind and thoughtful, but his fighting style is much more intense, and who knows that in the future this trait may not lead to further changes.

And what do you think of this chapter? Did you like it? Let us know with a comment! In the meantime, we remind you that the My Hero Academia anime is underway on Crunchyroll, and that episode 5×03 is just available.

READ:  The Attack of the Giants: what is written on that character's grave?