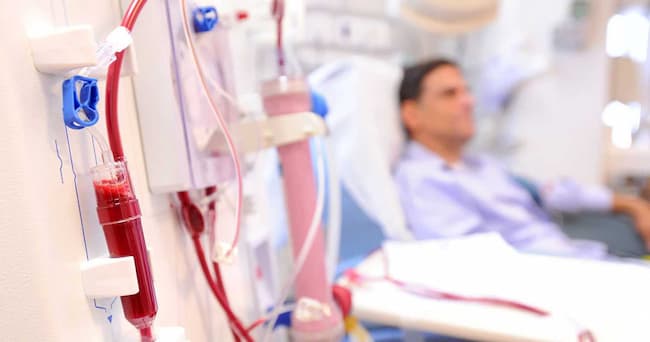 Kidney dialysis is used to treat kidney failure by removing wastes and extra fluid from the body. Dialysis does not cure kidney disease, but it can lengthen the time you live to put a new kidney or other treatment in place.

Dialysis works by moving blood out of the body through an access point – usually, a catheter (tube) placed into a vein in the chest area – which allows the removal of blood cells and certain chemicals.

The removed blood is then filtered through a hemodialyzer machine to remove urea, creatinine, etc., before being returned to the patient via another catheter placed in another location, usually into a vein in the arm or neck area. It is a life support or lifesaving procedure for people with kidney failure.

Dialysis has a significant impact on your quality of life and is very physically demanding. While some people can continue working while they receive dialysis, many others must adjust their work schedules or lifestyles when they begin dialysis. In addition, the side effects of hemodialysis can be uncomfortable during treatment and sometimes even dangerous.

For example, the physical effects from losing too much fluid from taking blood out can cause lightheadedness when getting up from lying down or an increased risk for sudden death due to ventricular arrhythmias or heart rhythm problems.

A person receiving hemodialysis gets a lot of fluid coming back into their body when the blood is returned. This can cause fluid overload, heart failure, and sleep abnormalities in some patients.

Over the last few years, many articles have come out about kidney dialysis side effects brain. Some articles say it causes a loss of concentration, inability to focus, and reduced short-term memory. Other articles report that patients who had a kidney transplant with a kidney from a donor who died with Alzheimer’s disease had an increased risk of developing the disease themselves.

I have also seen several people on treatment forums mention they or another patient had developed Alzheimer’s disease as a result of treatment for kidney failure. There is no doubt chronic renal failure is complicated by brain dysfunction, as this study shows:

Kidney failure patients have a higher rate of dementia. This is true whether or not they are on dialysis. It’s also true for people with reduced GFR due to other disorders such as diabetes and high blood pressure.

Although the cellular mechanisms that produce this brain dysfunction are not entirely understood, there are several theories:

Atherosclerosis – One idea is that atherosclerosis causes small strokes, damaging brain cells and causing them to malfunction and eventually die. In one large study, 65% of people with chronic renal failure had thickening of their carotid arteries.

Atherosclerosis significantly increases the risk of heart attack and stroke in these patients. Moreover, it may explain why kidney disease is a known risk factor for Alzheimer’s disease.

or by inducing the free radical generation

Aluminum has been shown to accumulate in the brains of animals exposed to high doses.

An excessive amount of aluminum can induce oxidative stress, leading to the generation of free radicals that damage DNA and membranes.

It is not known if aluminum plays a role in developing Alzheimer’s disease, but it is reasonable for researchers to investigate whether this is the case.

The uremic toxin hypothesis – One of the primary functions of the kidneys is to filter toxins from the body. These toxins accumulate and damage various organs (including the brain) when they fail. Some of the essential uremic toxins that accumulate in CKD and dialysis patients are:

– Soluble protein complexes such as microalbumin and beta 2 -microglobulin;

AGEs are naturally produced in the body when the blood sugar reacts with protein. They play an essential role in helping our bodies fight off bacterial infections. However, when they accumulate in excess, they can damage tissues, including the brain.

READ:  What Eats A Lion

Studies show that these uremic toxins damage neurons and create inflammation in the brain.

side effects of dialysis in the elderly:

Dialysis side effects in elderly patients are severe. It is essential to identify these before routine dialysis is started. Asking senior patients about any possible side effects of dialysis early on can help prevent unexpected problems later down the road.

Older adults with kidney disease often complain of forgetfulness, dizziness, and sleep issues on dialysis. Some studies show that up to 25% of older adults experience cognitive decline within 18 months after starting dialysis. There are also reports that they have an increased risk of developing Alzheimer’s disease even if they never had CKD or underwent hemodialysis previously.

One reason for these side effects is the accumulation of uremic toxins during treatment.

Dialysis patients are typically divided into three phases. The first phase begins with the onset of kidney failure and lasts until dialysis. There is no blood flow through hemodialysis or peritoneal dialysis machines during this time.

The second phase includes the time between starting dialysis treatments and the beginning of stable hemodialysis. This means more toxins accumulate in their bodies during this phase than during the first one.

The last phase starts after a patient has been on stable hemodialysis for at least six months and continues until they either begin peritoneal dialysis or have a successful kidney transplant. During this phase, the levels of uremic toxins are lower, but they still accumulate over time.

This is not surprising since scientists know CKD may lead to brain shrinkage, another well-known risk factor for Alzheimer’s disease. The good news is that treatment with erythropoietin can slow down this neurological decline by stimulating brain cell growth to maintain cognitive function. However, this only works if patients are on dialysis regularly.

Conversely, research shows that people with chronic kidney disease have a greater risk of developing Alzheimer’s disease than healthy adults. One study found the prevalence of dementia in this population is three times higher than what was previously expected. This suggests a link between kidney failure and Alzheimer’s but the exact relationship is unclear.

what are the symptoms after dialysis:

However, not everyone experiences memory loss and confusion on dialysis. Some patients who are very compliant with their treatments report that nothing about their mental health has changed since they started regular hemodialysis.

Of course, this doesn’t mean these symptoms don’t exist at all. Memory problems associated with dialysis-related toxins may only become noticeable once the patient’s kidney function declines further down the line. It can also be challenging for people to notice memory loss because it may happen gradually over time instead of all at once.

Some older adults associate feeling confused or forgetful with “getting old.” They may think these symptoms are regular changes that come with aging rather than a sign of kidney disease. This can make it challenging to identify and treat cognitive problems early on.

There are several reasons why older adults with CKD may develop memory loss and confusion during their treatments.

If not managed effectively, too much extra fluid in the body can cause brain swelling and blood vessel damage, leading to vascular dementia. Dialysis-related fluid overload is one of the most critical factors that impact brain health in kidney disease.

The kidneys also perform vital functions in maintaining the body’s chemistry by regulating electrolytes. When someone has chronic kidney disease, their kidneys can no longer keep up with this task. They may become too deficient in certain electrolytes like calcium, magnesium, and phosphorus. A shortage of these minerals can cause memory problems.