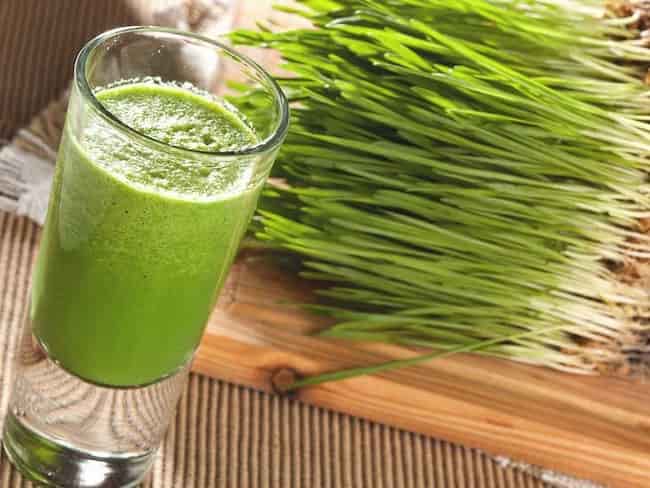 Wheatgrass powder contains a rich concentration of enzymes, vitamins, and minerals, which help to activate the body’s internal organs by cleansing them. It has been said that consuming wheatgrass can make you feel more energetic and improve your complexion as well as remove toxins from your digestive system.

Wheatgrass is simply grass grown from wheat seeds. The species of wheat used in order to grow this grass is Triticum aestivum, which is the same species that our bread and common wheat are made out of. Wheatgrass can be grown at home but it takes a lot of patience because it takes about six to eight weeks in order to grow and harvest the grass.

Wheatgrass can provide many health benefits to people who are suffering from certain diseases. Some of the claimed benefits include improving digestion, strengthening immunity, maintaining healthy skin, lowering blood pressure, improving eyesight, and controlling diabetes. It is also said that wheatgrass can slow down the aging process and energize those who consume it.

Wheatgrass powder contains up to 70% pure chlorophyll as well as vitamins such as vitamin A, B complex (including B12), C, D, E, and K; iron, calcium, potassium, magnesium, phosphorus, sodium selenium, and amino acids.

Wheatgrass powder is also said to contain enzymes that are responsible for many biochemical processes in the body such as enzyme diastase which helps digest carbohydrates; catalase which detoxifies the liver; peroxidase which prevents aging and fights free radicals.

Wheatgrass gives the body a natural boost of live enzymes and aids in detoxifying because it provides chlorophyll, which is necessary for building healthy red blood cells. Wheatgrass prevents the accumulation of toxins that can cause diseases by flushing them out through urine or sweat. Chlorophyll contains magnesium, which relaxes muscles by opening up blood vessels and decreasing spasms.

Wheatgrass powder and wheatgrass juice contain the same nutrients, but they are very different because of their form and how they can be used. Wheatgrass powder is usually mixed with water or juice in order to create a drink, which can be drunk daily for maximum results.

Wheatgrass juice, on the other hand, is a drink that is consumed in order to detoxify and cleanse the body from harmful toxins. It can be used as a remedy for certain illnesses such as asthma, arthritis, anemia, acne, cancer, bronchitis, diabetes mellitus type 2, hay fever, and sinusitis.

Wheatgrass juice is also known to boost the immune system, which helps fight against bacteria and viruses that can cause flu-like symptoms. Drinking wheatgrass juice will reduce inflammation in the body by acting as an antihistamine, anti-inflammatory agent, antioxidant, analgesic, appetite suppressant, balancing blood sugar levels, increasing urine output to prevent urinary tract infections, and increasing the strength of the heart muscle.

Wheatgrass powder and wheatgrass juice can be used as a skin treatment to cleanse and detoxify skin pores. This helps reduce acne outbreaks by removing toxins, which trigger acne; it also nourishes the skin with vitamins and minerals that maintain its health and glow.

Both wheatgrass powder and wheatgrass juice reduce high blood pressure by controlling the release of histamine, which causes it. Drinking wheatgrass juice also aids in reducing blood sugar levels because it strengthens insulin activity. It is able to maintain healthy cholesterol levels by preventing oxidation of LDL-cholesterol at a cellular level, which prevents plaque from being built up on artery walls.

Wheatgrass also slows down the aging process because it contains antioxidants that protect cells from oxidation, which can lead to cancerous developments. Selenium in wheatgrass juice is effective against free radicals that cause skin damage and premature aging.

Wheatgrass powder and wheatgrass juice are both beneficial for diabetes mellitus patients, but the latter works better. With the help of wheatgrass, glucose levels in the blood become more stable and insulin activity improves; this prevents the spreading of diabetes mellitus type 2.

Wheatgrass powder is most commonly used as a dietary supplement because it absorbs toxins from the body and helps flush them out into either urine or sweat (depending on what kind of toxin is causing the problem). It is used to help with various internal body conditions such as asthma, arthritis, anemia, acne, cancer, bronchitis, diabetes mellitus type 2, hay fever, and sinusitis.

It nourishes the skin and helps to moisturize it.

It is very beneficial in naturally treating your hair loss and also promotes hair growth. Since it contains high amounts of cysteine, wheatgrass is a natural cleanser and detoxifier that can help strengthen thinning hair when massaged onto the scalp.

Wheatgrass contains a chemical called “D-Pinitol”. D-pinitol helps in lowering blood sugar levels. It also has been found to have an anti-diabetic effect on laboratory animals.

Wheatgrass is a source of omega-3 fatty acids, which help in lowering cholesterol levels.

wheatgrass benefits the lungs:-Wheat grass help to cleanse and detoxify the respiratory system and cure coughing and phlegm problems. It also helps to reduce mucus buildup in your lungs.

Wheatgrass helps to improve your lung health and can help treat asthma. It can also help to clear up chronic bronchitis.

The chlorophyll in wheatgrass cleanses the blood and is very beneficial in treating memory loss problems.

Wheatgrass juice can be applied to the infected tooth. It reduces inflammation, cures tooth decay, and provides temporary relief from toothache.

Take half a shot glass of wheatgrass juice in the morning and once at night. Drink it on an empty stomach.