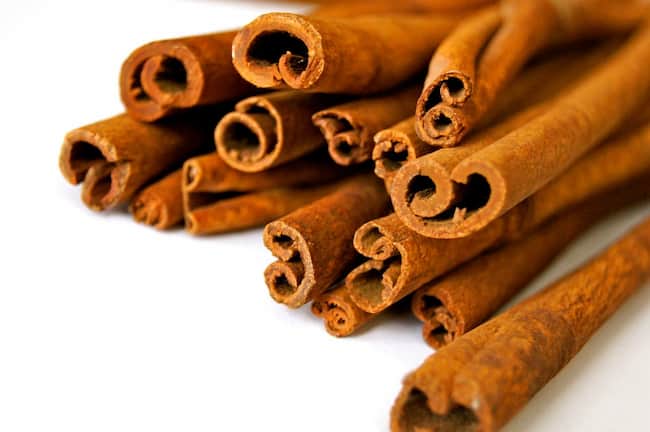 Cinnamon is the bark of a tropical tree. The dried inner bark of the plant is used as an aromatic spice. Its health benefits include being anti-inflammatory, lowering cholesterol, and fighting free radicals that cause cancer.

Here are the top 10 health benefits of cinnamon:

Remember that if you’re using cinnamon for its flavor, it’s best to choose Ceylon cinnamon (also called “true” cinnamon), which is said to be more potent than Cassia (or simply “cinnamon”) and better tasting as well. The typical Ceylon/actual cinnamon dosage is about 1 g per 100 lbs body weight twice daily.

Cinnamon is a potent antioxidant that helps fight the effects of aging and disease in many ways. Researchers have found that cinnamon can help inhibit certain types of cancerous tumor cells from growing while promoting the death of other types of cancer cells.

It is particularly effective against ovarian cancer. Cinnamon has also been known to slow down the formation of pancreatic tumors formation while also protecting healthy cells. Along with other antioxidants, cinnamon may offer protection against lung cancer one day. Pregnant women should not use cinnamon essential oil (and supplements).

Cinnamon’s effect on insulin levels is believed to aid in weight loss. This is helpful because insulin resistance is believed to be a cause of metabolic syndrome, which can affect overweight people and is associated with several health problems, including heart disease, type 2 diabetes, obesity, high blood pressure, inflammation, elevated cholesterol levels, increased risk for stroke and heart attack, among others.

Cinnamon can help lower food’s glycemic index, so you don’t get the sugar spike that typically comes from eating processed carbohydrates. It also helps reduce appetite by slowing gastric emptying (so you feel fuller longer).

Cinnamon has improved blood-sugar control in people who have type 2 diabetes. Studies have shown it may work as well as the drug glibenclamide (a medication used to treat diabetes) in controlling blood sugar. Cinnamon also blocks enzymes that break down complex sugars into simple sugars, limiting the rise in blood-sugar levels after a meal.

This is believed to explain why taking cinnamon helps lower blood glucose. One study showed that people with type 2 diabetes who took 1 g of cinnamon daily for 12 weeks had significantly lower fasting blood-sugar levels and “bad” LDL cholesterol than those given placebos.

Taking 100 milligrams of cinnamon twice daily has been shown to help lower systolic (the top number of your blood pressure reading) and diastolic (the bottom number) blood pressure in people with Type 2 diabetes. It is not recommended to take more than 1 g of cinnamon daily, which means it may be wise to have your doctor monitor you while taking this amount.

READ:  What Are The Causes of Nosebleeds in Children?

Cinnamon oil has been used traditionally for various digestive problems, including upset stomach, diarrhea, and bloating. This is because it helps slow down the movement in the gut and acts as a natural anti-inflammatory that can relieve pain.

Cinnamon has also been used topically on wounds because of its antibacterial properties. In one study, researchers found that applying a cinnamaldehyde solution (cinnamon oil) directly onto wounds caused rapid re-epithelialization (the Healing of the outer layer of skin cells) and wound contraction.

Cinnamon helps improve brain function by increasing circulation and breaking up clots that can restrict blood flow, thus improving oxygenation to the brain. Cinnamon extracts (such as cinnamon oil and CO2-extracted cinnamon bark) have been shown to help stop the formation of amyloid plaques in the brain, which is a hallmark feature of Alzheimer’s disease.

Cinnamon also stimulates blood circulation throughout the body, including the brain, increasing oxygen getting there. This could be especially good for someone whose job is mentally demanding. It may also help protect against stroke. In one study, cinnamon was shown to protect nerve cells in diabetic rats from being damaged by excess glucose levels in the blood.

Cinnamon has been found to reduce the proliferation (or reproduction ) of leukemia cells (cancerous white blood cells) in some studies, help stop the spread of liver cancer cells, and kill ovarian cancer cells. However, it is not clear what component(s) might be responsible for this effect, especially since there are many compounds in cinnamon that may positively impact a person’s health.

Cinnamon can help with indigestion, diarrhea, and constipation. It has been used to increase the bioavailability of other herbs, so it is possible that taking it with another herb could be beneficial for various conditions.

Cinnamon also stimulates the stomach’s production of digestive juices, which helps break down food, so you feel less bloated and sluggish after meals. Improved stomach function might also explain why some people who take cinnamon notice an improvement in their sense of smell, which often declines due to age or illness and leads to decreased appetite (and therefore poorer eating habits ).