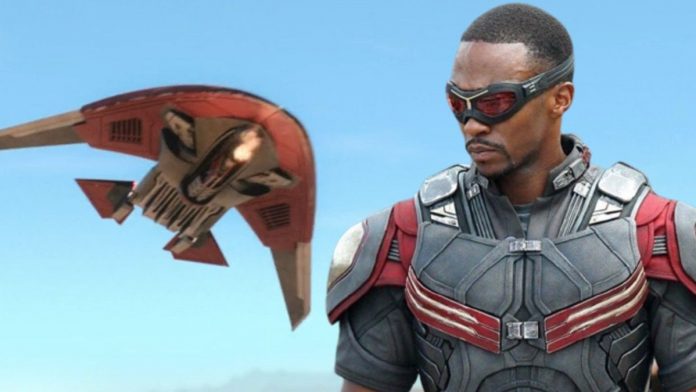 Much is being said about Falcon, that great character that Anthony Mackie plays masterfully in the Marvel Cinematic Universe now that he also has his own series accompanied by the Winter Soldier on Disney +. And although we have already seen him in several Disney / Marvel productions, his arrival is more violent in Captain America: The Winter Soldier than expected. What is Falcon’s authentic origin in Marvel? Join us on a little walk, which will be quite an aerial odyssey and which shows that the true Falcon of the comics is integrated into the deepest roots of the adventures of Marvel and its micro-cosmos.

Falcon was created by Stan Lee and artist Gene Colan. He was first seen in the Captain America comic series, issue 117 (released September 1969). Named Sam Wilson, this superhero uses mechanical wings to fly and has limited telepathic and empathic control over birds. He has had extensive experience in the innermost affairs of Marvel, and has been an important influence on many other characters.

In fact, as we saw at the end of Avengers: Endgame, he receives the shield and becomes the new Captain America when Steve Rogers leaves him, assuming the leadership of the group of heroes. This happens in the comics, but it’s just one of the many things we have to know about him. And it is that we are presented as a “normal” type with great abilities and who focuses his “power” in his warlike-flying skills; however, it is much earlier.

Originally from New York, his father was a Protestant pastor. He always liked birds, and since childhood, he was interested in them, training pigeons. In fact, he became the owner of the largest loft in Harlem, the area of ​​New York where he lived. But racism made even his fans dwindle; It is something that made him run away from the faith and refuse to follow in his father’s footsteps. But to his surprise, both his father and mother offer him many books on religions.

The story is cut short when Sam’s father dies in a street fight; It will not take long for his mother, who was assaulted, to also fall. This will cause his flight from New York and a change in attitude. He moves to Los Angeles, where he begins to commit crimes under the pseudonym “Snap”.

He goes to Rio de Janeiro, but his plane crashes on the Island of Exile, a place where there was a group called the “Exiles”, former collaborators of Red Skull (if you have seen Captain America: The First Avenger, you will know that he was a sadistic Nazi leader) who had now hidden on that island. There he will become a colleague of Redwing, a hawk with which he regains his connection with birds. Does the name of the device that shoots and flies sound familiar to you in Captain America: Civil War? Well that’s where it comes from.

The point is that although Falcon was introduced to us as early as the 2000s, in the comic he coincides with Red Skull, who uses the Tesseract (which contains one of the infinity gems) to merge him with Redwing, something that is done extendable to all birds. In this same maneuver, the supposed “Snap” disappears. He erases all that stage, and his mind makes him go from New York to the Island, where he helps the natives to fight for their survival and freedom. This makes someone take an interest in him: Steve Rogers himself, Captain America, with whom he becomes close friends.

READ:  The Handmaid’s Tale Season 5 Release Date and everything you need to know

From this friendship arises the character of Falcon. Both train (think that in this version, Wilson has power, transferred to him through the Tesseract), they ally and fight to defeat the Exiles and Red Skull. As in the movies, they both share action adventures, and it remains the most belligerent version of Marvel.

Other characters come into play like Black Panther, who helps him get his mechanical wings. It is a time in which Falcon himself has to replace the presence of Steve Rogers, who leaves his role as Captain America, although in the end he will return, an opportunity that the Red Skull himself takes advantage of to teach him that past that had “erased” and influence with the Tesseract to kill Steve Rogers … which he doesn’t get, obviously. What he will do is overcome, and become an agent of SHIELD

In his journey through the comics, he comes to face enemies of great caliber, even Taskmaster. But the most special moment comes when he realizes that he can control more birds, see through their eyes, which gives him enough skills to join the Avengers. And yes, this almost ties in with the history of the Cinematic Universe … but the funny thing is that the story is much more developed in various aspects (not for nothing do you know that comics have several branches). To delve into the adventures of Sam Wilson as Captain America, nothing better than immerse yourself in Secret Wars, which in the opinion of many, is one of the best stories that Marvel has generated. And actually, right after, take a good look at Avengers Standoff, where we discovered that the aesthetic is very similar to the MCU as well. There is more, and trying to be careful with spoilers. Please remember that the line followed in the comics is not the same as in the movies, even with the points in common and the characters present in both:

There is a line called Civil War II which is from the year 2016. In this line (we reiterate, not in the UCM), War Machine dies. At the funeral, Captain America makes a speech. Wilson will later see something about Guerrero Nuevo, and will try to meddle, something that pits him against the Americacorps. This will make it against the government. Throughout this period, Wilson improves his bird skills, this time electronically (with implants). As you might expect, the Americacorps will be your new enemies.

The image of Falcon will be detrimental over time, coming to fail in its mission on several occasions, some caused by Steve Rogers himself. We do not know what the future of Falcon will be in the series, or if it will follow that of the comics. But this retrospective helps us better position his character, as well as what it entails for the Marvel comics universe. And it is not little, as you can see. Now the most interesting thing will be to discover how the story adapts as Falcon and the Winter Soldier develop.