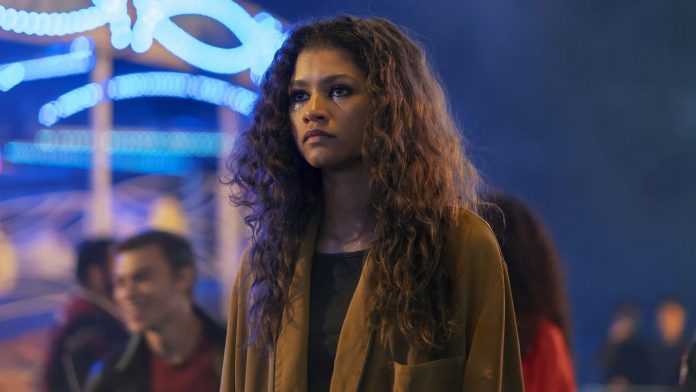 If there’s one thing for sure, that is the aggressive sadness portrayed in every episode of Euphoria. The life of sad and addicted teens is the central theme of Euphoria. This drama of teenage life is a package of drugs, tears, heartbreak, mental instability and every other aspect that makes up dark high school life.

And all of these stories start from our beloved protagonist, Rue Bennet. Zendaya plays the protagonist narrator, who is practically showing the backstory of her broken classmates through her vision.

HBO’s one of the most-watched teen dramas, Euphoria, which has a season 2 premiere already. A season where the characters, including our protagonist, have a lot to figure out. Jacob Elordi plays Nate, a character who becomes the show’s antagonist gradually, even if he doesn’t want to.

Nate struggles with his sexuality and portrays his frustration with a temper and sports. Sydney Sweeney plays Cassie, who is figuring out a not-so-stable life with her addicted father and is constantly objectified.

READ:  When Will Ready Player One Be On Netflix

Barbie Ferriera plays Kat, a character struggling with her body image and getting detached from her real-life while hustling with the issue. Finally, there’s our other protagonist Jules, played by Hunter Schafer, is a trans girl who mixes with the lives of all the characters while living her life by her means.

The long-awaited season 2 of Euphoria premiered last weekend, with episode 1 focusing on Fezco, the pure-hearted drug dealer who has a thing for the protagonist. Through his character, we are once more witnessing the harshness of the show. An environment where everything happens too severely. When the show is halfway through, Fezco and his friends are at the end of the gunpoint as Fezco’s dealer is dead. The people under whom the supplier worked are aiming guns.

Although that’s not all about the premier. There is a party showcasing all the cast members in their respective roles. With Rue’s endless escapes and Jules’ return, season 2 of Euphoria is already bringing up the dark story of the teen drama.  Everything seems to be in a good flow, but it is again beaten down to one thing. The cruel life.

However, that is the show’s catch. The catch of portraying the life of those teenagers as a tragedy. A tragedy that is yet to be mended. Euphoria, as a teen drama, is provocatively matured and dark. Although the characters are portrayed as teens, the show cannot be taken as a teen drama. The actual motive of the show is to depict teenagers as the minds between youth and adulthood. To depict this time of living as a complicated and dark pathway.

So now the question is will our protagonist and the other characters be able to cope with life, love and addiction at the same time? We will come to know in time.

Euphoria season 2 was released globally on 9th January 2022 on HBO. The 2nd season premiered with the first episode. The following two episodes are scheduled to release on 16th January and 23rd January, respectively, only on HBO and HBO max app. All the episodes will premiere on Sundays at 9 p.m. ET.