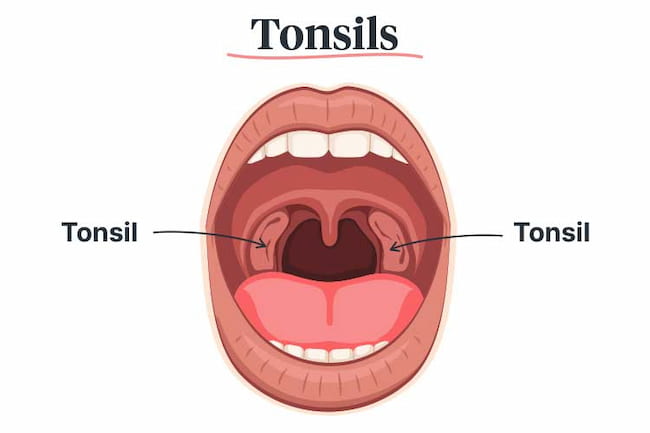 Tonsillectomy is a surgery done to remove the tonsils. The tonsils are lymphoid tissue (glands that make immune system cells) in the throat, behind the nasal passage. They help prevent infection by trapping germs like bacteria and viruses before they reach more sensitive areas of the respiratory system. Tonsillectomy removes the entire tonsils.

The potential benefits of surgical removal of tonsils can be:

1- Preventing or relieving symptoms due to frequent bouts of tonsillitis, strep throat, adenoids, swollen adenoids, or chronic sinus infections. Most will experience relief after surgery even if they do not have symptoms at the time of surgery

3- Prevention against the development of sleep apnea

5- Preventing swelling in the adenoid or nose

Tonsillectomy is one of the most common surgeries performed on children. Tonsil removal is most often done to children who have had several severe tonsillitis episodes, caused by strep pneumonia, or other bacterial infection.

The word “tonsillectomy” simply means surgery to remove either one or both tonsils. It is very important that you understand your options before choosing treatment for any medical condition.

long term side effects of tonsillectomy:

The number of people who have tonsillectomies in the United States every year is estimated at more than five hundred thousand. Tonsillectomy (the surgical removal of the tonsils) and adenoidectomy (the surgical removal of the adenoids, located near to where the tonsils protrude from the throat) are two separate procedures that doctors use to treat medical conditions such as chronic or acute infections and abnormal growths that affect breathing and swallowing.

Tonsillectomy and adenoidectomy can be performed simultaneously in a single surgery known as an adenotonsillectomy. Unfortunately, although this surgery is considered less risky than it once was, serious side effects can still occur after having one or both of the surgery types.

A person may have difficulty swallowing for a few weeks or months after surgery, but symptoms generally improve over time. The risk of having a hard time swallowing is higher when both tonsils and adenoids are removed at once rather than just one procedure being performed. Swallowing difficulties may also be accompanied by pain in the throat for some people.

These symptoms should continue to get better as the swelling goes down and soft foods can be eaten again in about six weeks from when surgery was done. Choking on food could lead to serious injury, so eating an appropriate diet is essential until all symptoms have subsided completely. In addition, patients who have had both procedures will need to return to their doctor for follow-up care every few months for the next year.

Side effects of tonsillectomy and adenoidectomy can include:

swallowing difficulties, pain or discomfort in the throat, bleeding or bruising as a result of surgery (rare), infection (very rare), and swelling that makes opening the mouth difficult. This last side effect can be bothersome for several weeks following surgery.

A person may also experience changes in their voice after having this type of surgery; these types of changes usually resolve themselves within one to three months following surgery. It is important to understand that it could take up to a year before all symptoms from having this procedure go away completely.

These side effects should continue to improve as time goes on and any pain medication used during recovery wears off. Swelling typically gets better within a few days to about two weeks, while swallowing difficulties may take longer to improve. It is important that the person eat soft foods during the recovery period to lessen any pain or discomfort they are feeling.

The exact cause of tonsil enlargement is not known for sure, but scientists suspect several different factors are involved. Factors include genetics, viruses and bacteria infections, inflammation, allergies, environmental irritants (such as pollution), acid reflux disease, problems with breathing through the nose (for example due to a cold or down-the-nose allergy sprays), and certain medications. One of the most common causes is a strep throat infection caused by “Streptococcus” bacteria. Allergies can also be responsible in some cases.

Tonsils may cause problems in three different ways. They can get infected by bacteria, irritants, or viruses; they may swell from these infections and block the airway, or they may also enlarge from chronic irritation or allergy. In some cases, enlarged tonsils press on nerves around the jaw which causes a constant pain known as “tonsillar neuralgia”.

Tonsillectomy is most often used to treat recurrent acute tonsillitis (sore throats) that do not respond well to other treatments such as antibiotics and decongestants. The surgery is also a very common treatment for chronic palatal ulcers caused by gastroesophageal reflux disease when medical therapy does not work properly or when patients do not want to take medications (such as proton pump inhibitors and H2 blockers) for a long time.

Tonsillectomy is an operation to remove the tonsils. It may be done for one or both of two reasons: to treat acute (sudden) and chronic (longstanding) infections, usually by infection with streptococcus bacteria; and/or to treat recurrent throat infections not helped by antibiotics or other treatments. The procedure itself is very effective in helping people get rid of their infection problem, although it has some inherent risks because of its nature.

1- Don’t smoke before surgery – If you smoke cigarettes, weed, cigars, etc smoking may cause problems breathing during surgery & recovery time will be longer.

2- Follow your doctor’s instructions – You are your best friend when it comes to your health. Your doctor knows how to perform surgery and has taken many years of school and practice to get there. You should listen to what they have to say because that’s why you are going for this procedure in the first place is because you need their help, not someone who says it can’t be done or is impossible…

3- Drink lots of water – Drinking extra fluids before, during & after surgery will help with recovery time from surgery.

4- Set up follow-up appointments – Your doctor will tell you how often you should come back for checkups following your procedure until everything is cleared up 100%. This part of recovery doesn’t start until all scabs heal so set them up ASAP!

5- Ask questions if something is unclear – It’s a discussion, not a lecture. If you have a question about something your doctor told you to go ahead and ask them to explain further or even better yet if there is someone else in the room that looks like they know what is going on ask them too! The more you know & understand about this process the smoother it goes.

Benefits of tonsillectomy in a child:

After tonsillectomy, the patient has to follow the below-given steps:

1- The child can drink cold drinks for 24 hours after surgery. After that he/she can’t have cold drinks until there is no swelling or pain in the throat.

2- Gargle with warm salt water(3 spoons of salt in half glass of water) twice daily for two days.

3- You can give ice chips or popsicles as needed if there is any trouble swallowing. Soft foods like pudding & soups are good for children for five days after surgery.

4- If you experience bleeding, take a bath and press a washcloth on your throat under a hot faucet to dissolve the clot. Don’t eat anything without telling your doctor.

5- Gargle with a mouthwash that contains an antiseptic mouthwash to help minimize the chance of infection or any dental work should be done after surgery by a dentist. There are different kinds of rinses & washes available in the market for your reference.

6- Don’t drink through a straw. If you must, do it slowly and gently because there is a risk of dislodging a blood clot. You can also chew on ice cubes which will decrease swelling and pain in the throat just like popsicles & ice chips.

7- Eat soft foods such as pudding, soup, mashed potatoes, yogurt, etc which don’t require chewing but just swallowing instead. The more you chew food the more it swells up the throat which causes pain.

8- Don’t eat anything that’s hard to chew & swallow because the swelling is still around the throat area.

9- Take medication as prescribed by your doctor before bedtime on an empty stomach, with a full glass of water. Do not skip any doses or you will be at risk for complications. You can take acetaminophen(Tylenol) every 4 hours if needed for fever & sore throat which are common side effects of tonsillectomy. Ibuprofen(Advil/Motrin)should only be taken if Tylenol doesn’t work because it can cause bleeding problems.