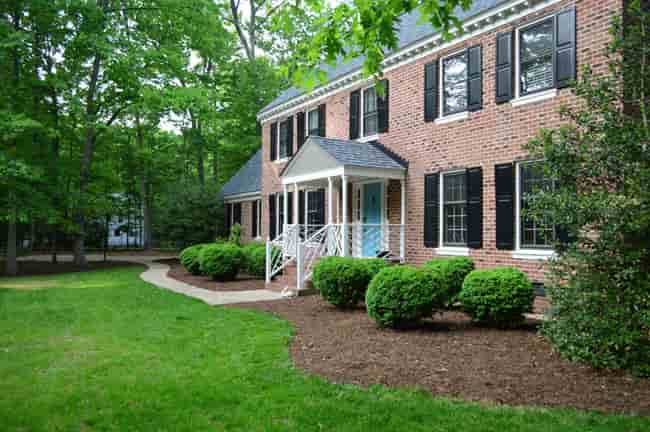 Benefits of Mulch around the House

1. To protect the roots of plants and vegetables against damage by pests or diseases

2. To ensure moisture in the soil for a long time and to prevent water evaporation from the surface. The moist ground is always more favorable than dry ground, especially where there is drought and heat.

3. To kill weeds and other vegetation, so once the ground is covered with mulch, you can forget about weeds. Plants and vegetables will grow healthy and clean.

4. To maintain the ecological balance of the environment by providing living creatures with food sources to multiply or enter our surroundings

5. Protection against ultraviolet rays (sunshine) for plants that are exposed to the ground.

6. To prolong the life of your plants, beneficial microorganisms are created under this layer that breaks down chemical fertilizers to release nutrients into the soil easily by these organisms for plants to use it. The mulch resists decomposition, giving you a chance to apply organic compost every year or twice a year which will increase the fertility of the soil.

7. Mulch reduces water evaporation, so it can be used to reduce the frequency of watering your plants and vegetables by half compared with no mulch, but in addition to ensuring that moisture is not lost from the surface after irrigation, mulch prevents loss of nutrients from the topsoil due to rainfall or sprinkling.

8. Mulch protects plants and vegetables from temperature changes, cold winds, and hot sun rays for example when the wind is blowing in winter, you can put a layer of mulch around stems to protect them. This will prevent plant damage due to temperature changes, if the temperature drops below freezing, leave some space between mulch layers so that plant can still breathe and not suffocate it.

9. Most mulches help suppress weeds, so they will be effective in preventing many types of weed such as nutgrass or creeping charlie, pull it out before the roots reach the bottom of the mulch layer. You can also cover your garden with organic compost which is an excellent weed killer.

10. Mulch can be used to beautify your garden because it makes the garden more attractive and esthetic, especially if you use organic compost or well-rotted manure as a mulch layer which has a nice smell, apart from giving nutrients to the soil beneath it. Investing in mulching around fruits trees will not only produce good fruits but also give your garden a beautiful satin-like look.

The best mulch to avoid termites:

If you are in the market for a good wood mulch to use on your flower or vegetable garden, then there are some things that you should consider when it comes to choosing between cedar mulch vs cypress mulch. Both of these kinds of wood are beautiful when used as part of landscaping projects, but they have very different characteristics.

Here we will go over some basic information about both mulches and discuss why using one kind in place of the other is a good idea. The final choice is up to you, but hopefully, this article will help you make an informed decision.

Cypress mulch is by far the most widely used type of wood mulch on the market today. It has a physical appearance that is quite close to pine bark mulch, although it can vary in color based on the species of cypress used in its production.

Cypress mulch is less likely to blow away in strong winds when compared to bark mulches and, because cypress shrubs are fast-growing plants, it is easy to replenish supplies of this mulch whenever necessary.

Cedar mulch, on the other hand, is extremely dense and tough as well as has antibacterial properties that will last for a very long time. This can lead to it being more resistant to decay from moisture than cypress mulch as well as having an attractive aromatic scent like many other kinds of cedar.

Cypress mulch is often created from scraps and waste wood that would otherwise be burned. Although this does save trees, it means that the cypress mulch may have more contaminants in it than you are comfortable with.

However, since cypress mulch is usually dyed brown so as to better resemble the color of standard pine mulch, the color difference between it and cedar mulch is actually quite minimal.

Mulch can be a decorative and functional addition to any garden bed. It is a ground cover that keeps weeds down, enriches the soil, retains moisture in the soil, prevents erosion, moderates soil temperatures, and looks beautiful. However, not all mulches are equally effective or equally safe. The right kind of mulch for your garden depends on what you want to accomplish.

If you want to keep weeds under control, a smothering mulch may be right for you. This kind of mulch is a thick layer of material that does not allow anything to grow through it. It works by blocking out light so nothing can grow from below or above it. However, this kind of mulch is also very flammable.

If you want to add nutrients to your soil, a composting mulch may be what you need. This kind of mulch breaks down over time and adds organic matter to the soil below it. You will have to replenish this type of mulch often by adding more compost or grass clippings.

If you would like to control the temperature of your soil, a reflective mulch will do the trick. This kind of mulch reflects light off of it and helps prevent sunlight from hitting the soil below it.

Some people use black plastic sheeting for this purpose or aluminum foil. It can also be dynamic, changing color depending on the time of day. Dynamic mulches are made by applying a thin layer of oil to the top of the mulch, which reflects light at different wavelengths depending on the temperature.

Rocks around the house for drainage:

Rock mulch is one of the most popular types of mulches on the market today, and it has many different uses. Some people like to use rock mulch around their flower and vegetable gardens because rocks can prevent weeds from growing, keep moisture in the soil, and create a natural barrier between lawns and plant beds. Rock mulch also looks very attractive in the garden, adding a touch of color to an otherwise drab landscape.

READ:  Benefits and Disadvantage of Handstands Against a Wall

Some people also use rock mulch around trees because it helps keep the roots cool when temperatures are high and prevents that area of ground from becoming compacted or overtaken by weeds. Rock mulch is also good for creating borders between sections of your yard and for preventing soil erosion if you live in a wooded area that experiences heavy rainfall.

The downside to using rock mulch is that it can be very expensive and usually requires you to use up much more of your garden space than other types of mulches because rocks prefer full sun and don’t break down as quickly as other types of mulches. Although it will vary depending on the size of your garden, you may find yourself needing to replace rock mulch every year if you live in a climate where it rains often.

If you do want to use rock mulch but don’t think that it’s practical for your garden, there are some alternatives that you can try:

Gravel is much less expensive than rock and does a good job of keeping weeds down, so you won’t have to spend as much time weeding. Just be sure to choose fine gravel rather than large stones so it doesn’t become a tripping hazard or make mowing difficult.

Although the sand isn’t as attractive as rocks, it does a good job of keeping weeds down and can be applied in much the same way. It’s also not as expensive or time-consuming to refill because you won’t need to buy more every year.

Although grass clippings decompose very quickly, they are great for mulching because they suppress weeds and keep moisture in the soil. They are also inexpensive and easy to get, although they do need to be reapplied often throughout the growing season because grass clippings break down so quickly.

Straw is another cheap option that does a good job of keeping weeds at bay. It doesn’t last for very long in most gardens, but it’s an effective way of controlling weeds while you’re waiting for other types of mulch to break down.