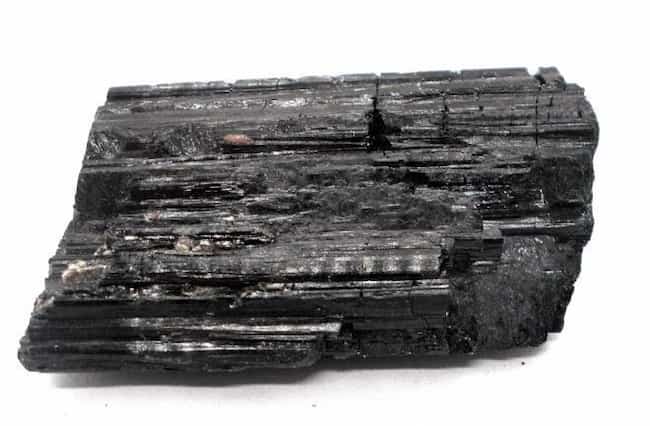 Benefits of Black Tourmaline and Protection Against Radiation

-Helps to balance and protect the aura, thus speeding up spiritual growth and enhancing psychic abilities

-Protects you from all kinds of negative influences such as electromagnetic smog, geopathic stress lines, psychic vampirism.

-Protects you from possession through entities

-Helps to relieve the pain caused by various types of radiation (including chemotherapy, x-ray, etc.)

-Helps against stress, fear, and anxiety

-Enhances feelings of joy and happiness

Some people are very sensitive to geopathic stress lines (lines where the earth’s natural energy flow becomes distorted), which can cause illness. For those who are particularly sensitive to these negative energies, sleeping or working under a geopathic stress line can have a negative effect on their overall state of health. Black tourmaline is an excellent healing stone for this condition because it absorbs the negative energy from these lines and prevents it from entering your auric field.

Black tourmaline also protects us from psychic vampirism, which occurs when someone taps into another person’s energy field and feeds off of it. Psychic vampirism can be caused by negative entities, but most commonly occurs in people who don’t know how to protect themselves from psychic attacks.

Be aware that this stone has both a dark and light side. It’s possible for the effects of black tourmaline to increase one’s own negative feelings, such as anger or irritability. For this reason, I always recommend that black tourmaline should be used in conjunction with other stones.

-From The Book of Stones, by Robert Simmons & Naisha Ahsian

This is a photo of my selenite wand which I use for healing and cleansing purposes. Click here to find out more about it.

The second type of vampirism is psychic vampirism, which occurs when a person energetically sucks or draws off the energy from another. He or she might do this unconsciously because it’s been done before as a child in order to survive.

In other words, as a baby we suck energy from our mother without even knowing we’re doing it — if we didn’t, we would die. So as children, we desperately try to get the energy and attention that we need from our parents or whoever is taking care of us.

It’s possible for this vampiric behavior to continue well into adulthood, but usually, those who do so are energetically draining the people in their lives. In some cases, this person might be draining off energy from his or her spouse, from a best friend, from boss or coworker, from a child — any place where there is an energetic connection between that person and another individual.

In order to correct this type of behavior, it’s necessary to feel all of your emotions as fully as you can. You do this by taking the energy from those around you and ultimately, from yourself. Why does this help?

Because when you have a strong reaction to any situation, it’s usually because that reaction is triggered within a previous emotional pattern that was laid down in childhood or adolescence. By feeling these reactions fully, you can, therefore “clear” yourself of that emotional pattern.

In the world of stones, the tourmaline is a very interesting gemstone. While it comes in many forms and looks completely different from one to another, all forms of this stone have one thing in common: they are extremely beneficial. In fact, many people would argue that tourmaline benefits outweigh its disadvantages.

Tourmaline will aid you in different ways depending on the kind you have. For example, it is said that black tourmaline benefits outweigh its negative effects. Listed below are some of the more interesting benefits that you can get from black tourmaline.

One of the more interesting black tourmaline benefits is its ability to protect you against bad vibes. It does this by negating the harmful effects of electromagnetic waves, which form an important part of modern life.

There is a scientific explanation for the tourmaline’s ability to deflect electromagnetic waves. Science says that when they are in motion, these waves have an oscillating effect on the atoms of this stone. As a result, the tourmaline creates its own vibrations which weaken the harmful ones when it is struck by them.

Black tourmaline benefits also include protecting you after surgery and other operations. A lot of people believe that this is due to its resemblance with the color of blood, which is an important part of the body’s discernment between friend and foe. Blood cells form a barrier around your internal organs known as the pericardium membrane.

It forms a type of protective layer that keeps the harmful stuff out. The blood cells are very strong, which is why they can easily deflect objects off their path. For this reason, if you have a surgical operation coming up, placing a black tourmaline under your pillow will put you in optimum condition for recovery.

Black tourmaline benefits do not just stop at protection against negative energies. It also works to protect you from radiation by negating the effects of gamma waves. The stones attract these harmful waves and then use their natural energy to repel them, preventing them from reaching your body. This makes black tourmaline extremely beneficial in the event of an atomic attack. That is to say, it can protect you against gamma radiation.

If you want black tourmaline benefits that go beyond protection, then this is the stone for you. It can help to purify your body after coming into contact with negative energy by negating the impact of low frequencies and static electricity. In addition to this, it also works as a purifying agent for water.

Use as a Grounding Stone:

As much as black tourmaline benefits your body, it can also help you to ground yourself by combating the excess energy in your system. This is extremely important if you want to perform a task involving magic or other metaphysical work. It will help you to manage your energy properly.

Use as a Healing Stone:

One of the great black tourmaline benefits is its ability to heal wounds and provide relief for people who suffer from migraines, arthritis, and even epilepsy. Other than this, it consists of several other minerals that are essential for good health. It also helps to improve the function of your immune system by increasing the production of white blood cells, which form part of your body’s defense mechanism against infection.

One of the most important black tourmaline benefits is its ability to protect you from different forms of pollution. From electromagnetic waves that have an adverse effect on the body to chemical pollutants that disrupt your nervous system, this stone can help you to remain safe from harm. In addition to this, it also works as a purifying agent for water and air by removing toxins from them.

As one of the most important black tourmaline benefits, its ability to protect you from radiation is one of the most powerful and beneficial. It removes harmful gamma waves that result from exposure to radiation and keeps them away from your body. It also prevents radioactive particles from entering your system by attracting these harmful entities off their path.

Use as a purifying agent:

This is one of the most unique black tourmaline benefits. It replaces negative ions in the air with positive ones, which are known for their cleansing properties. This is why it can help to purify your body after coming into contact with negative energy by negating the impact of low frequencies and static electricity. It helps you to move forward with your life while remaining protected from radiation at the same time.

Use as a fertility stone:

Black tourmaline benefits do not just stop at protection. It also helps to increase the chances of pregnancy and stimulates fetal development, which makes it an important fertility stone. This is why placing one under your pillow can help you to conceive more easily. It may even bring about a successful conception in cases where an embryo has not been formed.

Use as a psychic protection stone:

Black tourmaline benefits are extremely unique when it comes to its ability to protect you from negative energy, entities, and other forms of black magic. This is why wearing or carrying one can help you to remain protected at all times, which makes it an important element in the spiritual and metaphysical world. It keeps you safe from black magic and other forms of negative energy that can harm your psychological and emotional well-being.