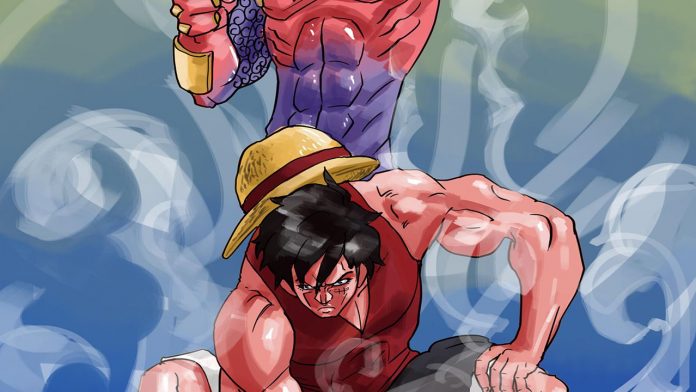 Luffy brought out a lot of skills during ONE PIECE. His Devil Fruit Gom Gom allows him to use elasticity to launch very powerful attacks. To this must be added the obtaining of the Haki that is refining in all its forms, battle after battle. And then there are the Gear, its aces up its sleeve.

The Gear are among the strongest weapons of Luffy and that have pulled him out of numerous situations, in particular before the protagonist of ONE PIECE learn to use Haki properly. At the moment, fans are waiting to find out if a Gear Fifth will really arrive against Kaido or if the boy with the straw hat will do enough with the moves he currently has.

But what if he came up with a particularly bizarre move? The Agent-65 fan presented a fan art of his that he does on Reddit meet the world of ONE PIECE with that of Jojo’s Bizarre Adventure. The latter is well known for its stands, the spiritual manifestations endowed with the most disparate powers. In the illustration shown below, Luffy is in the pose from Gear Second and evokes his stand which recalls some of the characteristics of the Gom Gom fruit and the boy’s hair in Gear Fourth.

With the skills of a stand, Luffy could truly be unrivaled in the seas of ONE PIECE.