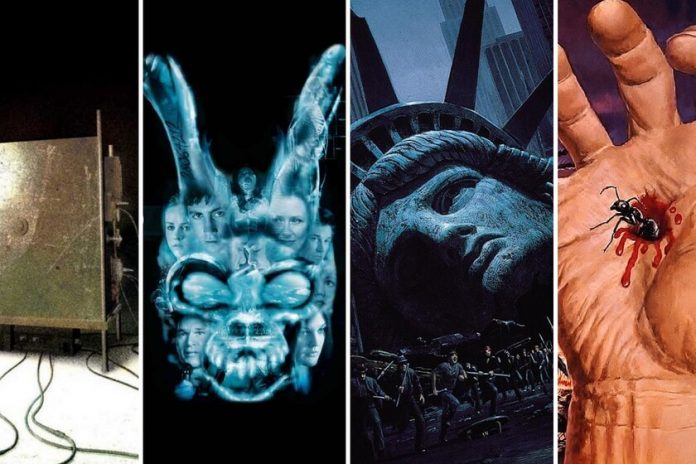 There is a topic strongly associated with the science fiction genre, and it is not Martians or time travel: it alludes to its own nature and refers to it being a genre of ideas. In other words, a good idea alone can support a science fiction story. Needless to say, if that topic has survived for decades, it’s because … it’s true. This compilation of movies proves it very well: a handful of stories that need almost no special effectss to captivate us with surprising ideas.

Our rules for compilation are based on not having radically renounced to select films that have special effects, but in all cases they are cornered in a not too relevant place. Namely, in the following films there may be minimal special effects … but of course they are not the essential piece gear.

Known basically for being the inspiration for Terry Gilliam’s magnificent ’12 monkeys’, ‘La Jetée’ is also one of the most famous experimental films in history. Narrated exclusively through still photos and a voiceover for less than half an hour, Chris Marker tells how after an apocalyptic world war, a group of scientists decides to send a prisoner to the past to avoid the conflict. An evocative and nostalgic marvel, capable without the need for futuristic imagery of introducing us into an obsessive world around the sole memory of the protagonist and his beloved watching a man die on a pier.

If there was anyone capable of making a sci-fi movie absolutely devoid of special effects, it was Goddard., one of the great reducers of cinematographic language to its pure essence, without unnecessary artifice. To do this, he turned real settings in Paris into those in his film, and did not need to build complex sets. In addition, also closely related to his belief in the evocative power of popular culture, he used Lemmy Caution, a character from British police pulp literature, as a hero, although this time he had before him a somewhat more fantastic mission than usual: to destroy to the evil computer Alpha 60, giving humans back their ability to experience emotions.

With tricks limited to a minimum and all based on simple color and image manipulations, the legendary cinematographer Saul Bass directed his only film here, a curious beauty with a documentary tone. It narrates with a rhythm and a sense of suspense that many masters of the genre would like the relentless rise of a community of ants after a strange cosmic phenomenon. It all starts when two variants of ants from an Arizona valley come together to face their natural predators.

Science fiction is a genre of ideas, as we said at the beginning and all the films in this article make clear, but of course it is also a genre of setting. With very few elements (charismatic characters, accurate script, half a dozen very cheap sets) John Carpenter composed a credible, bleak and influential future in this futuristic presidential rescue thriller. Snake Plissken became one of the genre’s most prominent antiheroes and Carpenter earned a well-deserved reputation for being able to build iconic fantasy films on his own with very little means.

We momentarily betray our own rules with a movie that does have modest special effects, but that They are so specific and anecdotal that they do not take away any of the strength of the almost theatrical approach of the film: a single stage (which simulates being a network of infinite cubes) and a group of people locked up and trying to get out. The oldest argument in the book of arguments, in a Kafkaesque intrigue that obtained extraordinary success thanks to how he knew how to bend to his own and very synthetic proposal.

READ:  Bizum reduces the number of operations that we can do per month from 150 to 60

Two decades after its premiere, ‘Donnie Darko’ remains a brilliant piece in modern fantasy. The end of adolescence and the difficulties to integrate into society are the background themes of a film that tells how a teenager (great Jake Gyllenhaal) begins to have strange visions and perceives that the inevitable end of the world is near. Richard Kelly would never shine as high as in this, his debut, a masterful and isolated film of all kinds of fashions and trends, just like Donnie Darko himself.

You can see it in Filmin

There is no more transparent example that complex and sophisticated science fiction can be done with a total of zero special effects than the debut of Shane Carruth. A handful of actors and a few very accessible settings (motel rooms, garages), but also a highly complex script about time travel that can leave the most seasoned viewer scratching their heads. Constant paradoxes and a labyrinthine, fragmented narrative better reflect the deconstruction of reality that time travel entails than any high-budget effect.

Perfect Jim Carrey, Kate Winslet and Kirsten Dunst star in this piece of everyday science fiction that is part of the duo of films written by Charlie Kaufman (this and ‘How to be John Malkovich’) that use science fiction as a mere excuse to delve into the intricacies of the human mind and very abstract concepts (the memories in this one, the identity in that one). Here the visual inventiveness of director Michel Gondry, always based on mechanical tricks, provides the perfect counterpoint to Kaufman and the daring story of a couple who go through a scientific procedure to erase their memories of the other person.

Nacho Vigalondo’s first film remains the best example of his virtues as a creator of science fiction: innovative and daring concepts that are put on stage in a very simple way, often from the point of view of the witnesses: ‘Alien’ was an invasion from within a flat, and ‘Colossal’ a film of giant monsters at ground level. ‘Los Cronocrmenes’ proposes travel in time in the middle of a forest, with the spectator lost in a centrifuge of paradoxes that continue to function as a shot … and without special effects.

A modest production, not very well known, that arrived in Spain undercover and in DVD format a few years ago, and that is worth tracing and discovering. Part of the last script signed by a classic (Jerome Bixby, who wrote episodes of the classic incarnations of ‘Twilight Zone’ and ‘Star Trek’) and with very modest means and intentions, tells the story of a man who has survived for 14,000 years due to a peculiarity in his body that prevents him from aging. A group of university professors discuss with him the scientific and philosophical implications of his very existence.

Another film with almost no special effects whose focus is on a very different point: the curious relationship that is set between a journalist and a hypothetical time traveler (wonderful Aubrey Plaza and Mark Duplass), which could be a genius or a paranoid. Romantic indie comedy modes for a story that delves, in part, into why time travel has become one of the sci-fi tropes that has most fascinated viewers in recent times.

The important thing about time machines and trips to other dimensions is not the utilities, but the concept, and this splendid mix of horror and science fiction makes it clear: a group of friends meet for dinner when a comet passes over Los Angeles and their perception of space and time begins to distort. A very ingenious proposal that we recommend you approach without having even seen the trailer.