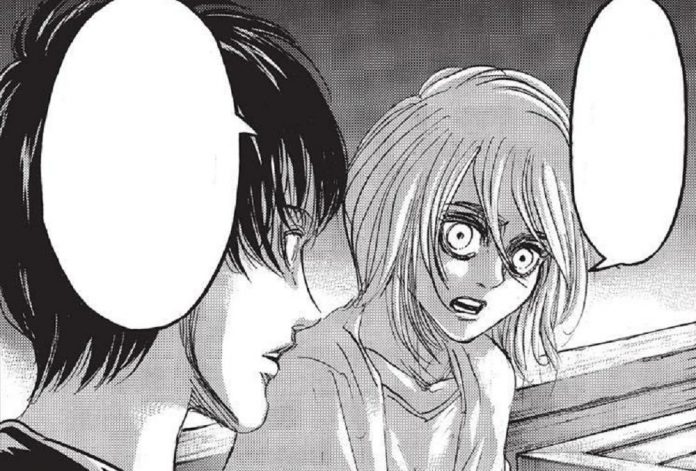 After 11 years and 7 months of serialization, with the fist on the chest, the readers greeted The Attack of the Giants which finally ended with chapter 139. The community has split in two since not all fans have appreciated the ending mainly due to some questions left open.

In some cases the criticisms have gone beyond the threshold of the lawful, just think that on the occasion of the release of the last chapter the manga editor had to block the comments to limit the insults. However, one of the most particular but at the same time fascinating roles was that of Story, in this case in its alleged bond with Eren. A fan tried to clarify the character’s role and the mystery of her pregnancy with a theory that follows:

“After reading the last chapter I believe that Historia’s pregnancy had a great significance. I think Eren wanted to entrust Historia with all that path immediately following the end of the war. After Eren’s death, in fact, she had to protect the families of Jean and Connie, part of those who were accused of killing Eren and betrayed the country, as well as to decide what to do with Paradis after the war. If Historia had not survived, then Armin and the others could never have returned to Paradis and Eren could not have rested in peace in his homeland. Since Eren himself has erased the memories of others, he probably deliberately decided not to remove them from Historia but to entrust them to him. And that’s why she looked that way during her pregnancy. She knew of the sacrifices Eren, Mikasa, and all of her friends would have to make soon, but she knew she had no choice. Historia probably accepted all these developments as queen, and as such she had to protect the island and Eren’s will to create a world without the Giants. But how did Historia manage to avoid the succession with Zeke? It is not excluded that the two have thought about it and Historia’s idea could have been the following: “What do you think if I get pregnant?”
Come to think of it, that sounds like a great idea. “

And you, on the other hand, what do you think of his hypothesis, does it seem convincing? Let us know with a comment below.