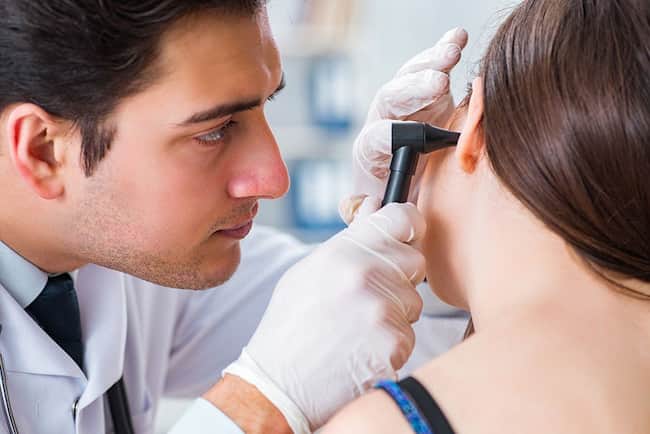 Ear blockage is a very common problem that affects more than 50% of people around the world. This ear blockage may be temporary or permanent and can occur in any part of the ear.

In most cases, it occurs because of wax accumulation in the ear that blocks it from proper sound transmission through air pressure. That’s why some people experience ear blockage when flying.

Ear blockages that are caused by wax problems can be resolved with simple at-home treatments, while others may require medical attention in order to remove the blockage.

But whatever the cause is, it’s always best to seek professional help if you experience issues with your hearing because it could lead to serious complications including tinnitus, which is a constant vibration or ringing sound in the ears.

Following are some of the common causes of ear blockage:

This is probably the most common cause of frequent episodes of ear blockage. As wax accumulates in your ears, it can cause them to temporarily feel plugged up because it prevents normal sound transmittance. However, this type of ear blockage can be resolved by using ear drops that help soften the wax and make it easier to remove.

If you experience frequent episodes of ear blockage accompanied by pain in your ear, then you might have an ear infection. There are different types of infections that affect the outer, middle, and inner ear canals. They’re usually caused by bacteria or fungi that cause swelling and inflammation.

This type of common ear blockage happens as a result of damage to the eardrum and small bones around your ear. It results from long-term exposure to smoke, which results in a loss of functionality in the tiny bones and can cause hearing loss.

Also, you could experience ear blockage when your immune system responds to airborne allergens such as pollens or dust that get into your ears. The body’s response causes inflammation in the Eustachian tube and tissues surrounding it, which can build up and cause your ears to feel plugged.

Other causes of ear blockage are certain types of medications that you might be taking. Different types of drugs, including some antihistamines, blood pressure pills, antidepressants, anticonvulsants, diuretics, narcotic pain relievers, migraine medications, and even some antibiotics can result in ear blockages.

In rare cases, ear blockage could be a symptom of a birth defect in which the canal is too narrow to allow sound passage through it. There may also be problems with the Eustachian tube because of this condition.

This is a medical condition that affects the balance and hearing of a person. It can lead to frequent episodes of ear blockage and is accompanied by dizziness, nausea, vomiting, and even ringing in the ears.

Finally, if your ear canal has been deformed due to an injury or a scar, then you might experience temporary or permanent ear blockage.

Ear wax is a common culprit of ear blockage and can be treated with over-the-counter remedies such as mineral oil drops or carbamide peroxide. Another effective home treatment for excessive wax buildup is to use hydrogen peroxide, either alone or mixed with water, directed into the ear. When directed through a syringe it can be effective without the risk of injury if done correctly, otherwise, the attempt could result in serious injury or damage.

Treatment for an ear infection will depend upon the severity and type of infection that has caused the blockage. In some cases, antibiotic medications may be required to overcome an infection. In other cases, your doctor may decide to drain the pus from the ear. If you have a ruptured eardrum as a result of an infection, it will need to be treated by a medical professional.

Infections can also be caused or exacerbated by allergies so identifying and avoiding allergens that cause your symptoms is critical for resolving an ear infection or allergies that result in a blockage.

Some medications can cause ear blockage as a side effect, particularly those that reduce your body’s ability to produce wax which might normally aid in clearing the Eustachian tube of blockages. If you believe this is the cause, discuss with your doctor possible substitutes or alternate courses of treatment.

Congenital deformities and problems with the Eustachian tube can also result in an ear blockage, but those conditions are rare and require a doctor’s intervention to address them.

How to open a blocked ear:

1. Take a drink of warm water. Fill your mouth with the warm water and then swallow it quickly. You may have to do this more than once, but it should unplug the ear. If that doesn’t work, you need to go see someone about it because it could be something serious like an infection or fluid build-up.

2. Gentle massage of the tragus (the little bump in front of your ear canal). This will stimulate the muscles around the outside of your eardrum and may help it pop. It usually works for me when my ears get plugged up on an airplane or while driving with the windows down. You can also try chewing gum, which helps your ears adjust to the pressure changes. Try this for a couple of days before you go to the doctor, because then it may be too late!

3. Baby oil or olive oil on a cotton ball placed over the ear opening should help with the eustachian tube becoming unblocked and re-establishing equilibrium in fluid pressures between your ear and the middle ear.

4. Apply a heating pad to the outside of your face over the blocked ear for ten minutes or so, relax and let it work its magic.  The heat will unclog your ears in no time.

5. If you’re trying to clog up one side of your head just to get out of doing something, it could be a migraine coming on. Try HeadOff and if that doesn’t work take your doctor’s advice.

The ear feels clogged but no wax:

The clogged feeling in the ear may not be due to wax. Here are some other medical conditions that can cause it:

Sinusitis. If you have a cold, you might feel like your ears are plugged when in fact they are blocked by mucus from an inflamed sinus lining. So if your ears stopped up after a cold and never opened up, you might have sinusitis.

Ear infection (otitis media). This is more common in children than adults, but adults can get it too. An earache or pain behind the ear often accompanies a diagnosis of an ear infection. Other symptoms include hearing loss and drainage from the affected ear. Doctors prescribe antibiotics for ear infections.

Otitis externa, also known as swimmer’s ear, is an infection of the outer ear canal that can cause pain and itching in your ear. It develops after swimming or exposure to water that contains certain bacteria, fungi, or parasites.

Benign paroxysmal positional vertigo (BPPV). The Epley maneuver is the standard treatment for BPPV. It involves moving your head into specific positions that cause gravity to move free-floating pieces of debris in the inner ear back into the vestibule where they belong.

Labyrinthitis. This condition is an inner ear infection that can cause splitting headaches, dizziness, nausea, vomiting, and temporary hearing loss. Head trauma can also damage your labyrinth and lead to labyrinthitis, as can certain drugs and ear surgeries.

Sudden hearing loss in one ear

Ringing or fullness in the ear

A feeling that your ears are plugged and need to pop.

Ear wax build-up is not the same as a clogged ear and does not require any specific treatment.

Tinnitus (ringing or noises in the ear) or sounds such as hissing, roaring or buzzing

A feeling that your ears are plugged and need to pop.