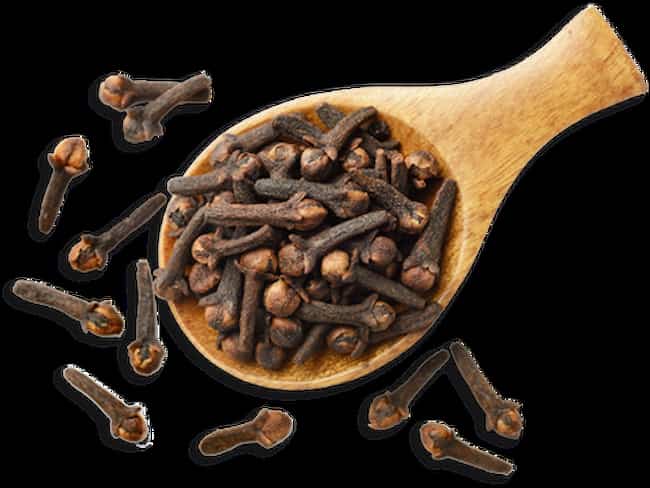 Cloves are the dried flower buds of a tree that belongs to the family Myrtaceae. The name comes from clavus, meaning “nail.” This is because their shape and surface look like small nails. Clove oil has been used for medicinal purposes since ancient times and can even be found in Chinese medical texts dating back to 2700 B.C. Aromatherapy associates clove oil with stimulating, warming, and purifying qualities.

It has been used in cooking for centuries cloves are a classic component of Italian sausages and Indian curries, and they also flavor Indonesian kretek (clove cigarette) tobacco. Cloves contain the chemical eugenol, a close relative of capsaicin, the heat-inducing compound found in hot peppers. Clove oil can be used in dentistry to numb nerves and for pain relief. It is also known to have antioxidant properties that may be helpful for oral health

Cloves are widely used in Indian cuisine where it is an important flavoring agent especially in Garam masala, which is a blend of powdered spices that is ubiquitous in Indian cuisine. They are also widely used in Pakistani and Bangladeshi cuisines. Clove-flavored oil (containing eugenol) is traditionally used to spice the Christmas pudding in British desserts

Cloves can be found fresh or dried. When buying whole cloves, look for a uniform color that is consistent with the dried form of the spice. Fresh cloves should appear shiny and have an aroma of nutmeg and pepper, as well as a sharp, pungent taste. When purchasing ground cloves look for those with a deep reddish-brown color. Make sure you don’t buy powdered cloves or cassia because the flavor, color, and aroma are inferior.

Clove bud oil is distilled from fresh flower buds of the clove tree, which has a long history in dentistry. Clove bud oil is used for toothache relief after application to gums or teeth. It can be mixed with water or applied topically to raw tissue surfaces to help control pain, inflammation, and bleeding. Clove bud oil also has anti-inflammatory properties that may be helpful to people suffering from arthritis or other inflammatory conditions

Clove bud oil contains 75 to 90 percent eugenol, the active ingredient, which is an anesthetic to the dental pulp tissue. It also slows down the activity of osteoclasts that cause resorption of bone, which provides pain relief. Clove bud oil also has anti-inflammatory properties that are beneficial to people with osteoarthritis or other inflammatory conditions

Cloves have antimicrobial activity. They inhibit the growth of certain bacteria and fungi. For example, eugenol inhibits Staphylococcus aureus, the bacterium associated with infections of the nose, throat, and skin, as well as pneumonia.

There are many reports of antibacterial activity of the extracts from whole-plant as well as from clove buds. The high activity of extracts from cloves is due to the presence of eugenol and related phenolic compounds which are responsible for antibacterial effects. In a recent study, it was shown that there is the minimum inhibitory concentration (MIC) of eugenol against gram-positive bacteria is 0.5% whereas the MIC against gram-negative bacteria is 2%.

It is believed that clove oil has a sedative effect mainly due to its high eugenol content which acts as GABA (A) receptor agonist. Even acute toxicity of eugenol seen in mice is attributed to GABA (A) receptor-mediated inhibition of motor activity and caused sedation.

The analgesic property of cloves is attributed to the eugenol content in them which acts as an agonist for cannabinoid receptors. These receptors have been shown to play important role in pain perception and relief. Thus, a formulation containing clove extract with its high eugenol content may be beneficial in the treatment of pain.

READ:  Benefits of Litchi Fruit and its nutrition facts

A recent study shows that clove extract exhibits a memory-enhancing effect and its administration provides an improvement in learning and memory deficits. Thus, it can be suggested to use clove as a potential candidate for the treatment of Alzheimer’s disease.

The cardioprotective effects of eugenol include inhibition of platelet aggregation and thromboxane B 2 production, inhibition of cyclooxygenase/lipoxygenase products, increased release of endothelium-derived relaxing factor (EDRF), and decreased responsiveness to adrenergic stimulation. Thus, clove oil may be beneficial for the secondary prevention of cardiovascular disease by decreasing the rate of myocardial infarctions.

The anticancer property of clove is mainly due to its eugenol content which exhibits antioxidant and antiangiogenic activities as well as antiproliferative activity towards different cancer cell lines such as glioblastoma, neuroblastoma, pancreatic carcinoma, and prostate carcinoma.

Benefits of cloves for teeth:

It has already been mentioned that the major active constituents present in the clove are eugenol and related phenolic compounds which add an antioxidant property to it, making it useful for radioprotective purposes. Even the antiaging activity of clove is also attributed to the antioxidants present in it.

benefits of cloves water for conceiving:

Clove oil exhibits topical antimicrobial properties against different human pathogens, mainly because of its eugenol content which also acts as an antioxidant and may be involved in the mechanism of its antimicrobial activity. Even clove extracts have shown antibacterial activity against various gram-positive bacteria such as Staphylococcus aureus, Enterococcus faecalis, Listeria monocytogenes, and Bacillus subtilis.

Benefits of clove oil for skin:

Clove oil can also be used to treat fungal infections such as oral candidiasis, dermatophytosis, athlete’s foot, ringworm, etc. The fungi toxic effect of clove oil is attributed to eugenol which inhibits the adhesion and growth of pathogenic fungi by interfering with cellular membrane transport.

Clove has been found to be effective in the treatment of gastric ulcers due to its ability to decrease gastric acid secretions and pepsin concentrations, stimulate mucus production and epithelial cell proliferation in the gastric wall, protect against free radical damage induced by ethanol-induced ulceration, and accelerate the healing process of gastric ulcers.

Effects on the immune system:

The immunomodulatory effects of eugenol have been attributed to the increased phagocytic capacity of monocytes made by stimulation of the macrophage respiratory burst and by enhancing antibody production.

Clove extracts have been found to be effective in the treatment of gastric ulcers probably due to their anti-inflammatory and antioxidant effects. In a study, clove extract significantly reduced the number of gastric ulcers induced by cold stress or ethanol compared with control groups.

19. Clove oil has been found to be effective in the treatment of dental caries due to its antibacterial effect against Streptococcus mutans, which is one of the major causative agents for dental caries. In a recent study, it was found that an aqueous extract of clove powder was more effective than chlorhexidine in preventing dental caries.

Eugenol has been found to be effective in reducing blood sugar levels by activating insulin secretion from pancreatic β-cells, thus making it useful in the treatment of diabetes mellitus. It has been shown that aqueous clove extract significantly reduced fasting blood sugar levels, increased insulin concentrations, and decreased glycosylated hemoglobin in diabetic rats.

Clove acts as a strong antioxidant that helps the body to fight cancer-causing agents. It can be used both externally on the skin and internally for medicinal purposes. It is useful in treating oral infections like gingivitis because of its antibacterial properties.