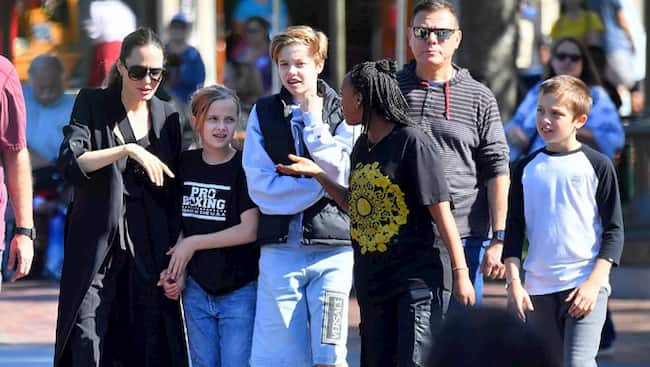 With a manly look, Shiloh Jolie-Pitt attends the Maleficent premiere for the first time after sex Change. Angelina Jolie attended the premiere of the sequel to the Disney movie with her children. After undergoing sex change this is the first time that Shiloh attends a public event.

Yesterday was the premiere of ” Maleficent: Owner of Mal” in Los Angeles. Angelina Jolie walked on the red carpet with her children Pax (15), Zahara (14), Vivienne (11)  Knox (11) and Shiloh Jolie-Pitt (13). As you all remember, the eldest of the clan Maddox, 18, is currently studying at the university in South Korea.

The actress surprised everyone with her beauty wearing a black dress to the floor adorned with a bright scorpion. However, his first biological daughter drew everyone’s attention because after undergoing sex change this was his first public event. She and sister Vivienne almost combined with black and white sets topped with leather and denim jackets respectively.

While Zahara wore a beautiful black dress similar to her mother’s, and Knox wore a teal coat and black suit. Pax looked particularly elegant with his all-black outfit with a gray Louis Vuitton harness around his shoulders.

The girl received hormonal treatments to curb the changes that her body has presented since she turned 12. This news was true according to international media. The procedures were performed at the Younique Surgery Center in Santa Monica, California and were paid by his mother.

The treatment consisted of ingesting medications that contain hormones to curb female body changes such as breast development. During masculinizing hormone therapy, the male hormone testosterone is consumed. It also inhibits menstrual cycles and decreases estrogen production of the ovaries.

For now, it is unknown if she will undergo surgery or only hormonal changes.

After a legal battle, the actress agreed in good terms the custody of all her children with Brad Pitt. However, he already got rid of one, as Maddox is studying at Yonsei University in Seoul. Now it seems that he will also lose someone else.

According to US Weekly magazine, the little transgender asked to move to Los Angeles with the actor. “She plans to move in with her father and is counting the days for that,” said a source close to the family.

With a manly look, Shiloh Jolie-Pitt attends the Maleficent Premiere For The First Time After Sex Change was last modified: October 3rd, 2019 by Edie Perez
Share it:

Boruto: Naruto Next Generations: is a "big" announcement for the anime coming?

Will Smith joins Quibi with a new stand-up comedy concept

My Hero Academia: first teaser trailer for the fifth season

Netflix’s Premieres and News of September: Series, Films and Documentaries
The Final Trailer of “Terminator: Dark Fate” is Out Now and It Is Best So Far
Comment