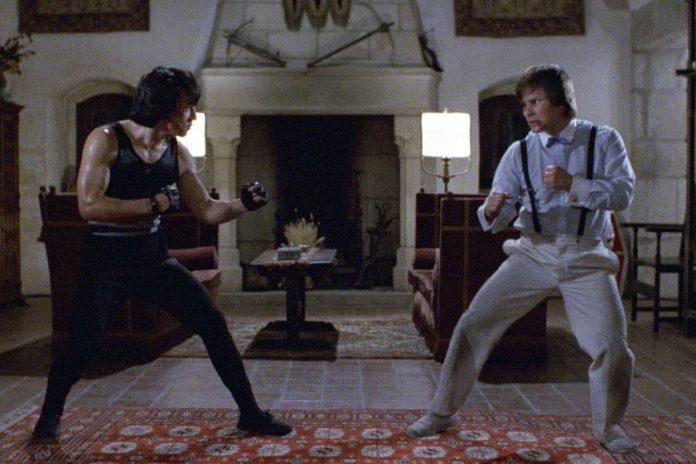 There are dozens of fights in the history of action cinema that deserve the qualification of mythical: from the origins of martial arts to Western equivalents such as those choreographed in stop-motion by Harry Harryhausen, to milestones such as the confrontation between Bruce Lee and Chuck Norris in ‘The Fury of the Dragon’ or, more recently, the monumental film conclusions like ‘The Raid’. But if you had to keep one, what would it be?

We are clear that it would be one starring Jackie Chan. In his golden age, the mid-eighties, imbued in the best moment for international action cinema, that of Hong Kong, he signed his best films. From the ‘Police Story’ thriller to films as personal and inimitable as ‘Gangster for a little miracle’, going through his replica of Indiana Jones, ‘The Armor of God’. And also, of course, his films with Samo Hung and Yuen Biao.

Among them there are wonders such as ‘The Pirates of the Seas of China’ or ‘The Three Dragons’, but Perhaps the best of the lot is ‘Los Supercamorristas’, shot in Barcelona and a classic kung fu video store that in the eighties devastated the Spanish businesses of the branch. A mixture of comedy and action with a Jackie Chan in his creative best moment and that contains what could well be the best melee fight of all time: the one that faces Benny The Jet Urquidez.

Jackie Chan vs. The Jet: the best milks

In the new installment of Everything is a lie in film and television we explain why this fight is at the top of the genre. We take a look at Chan’s fighting and editing style, which has few better examples than those of this era, and we tell you why Benny The Jet Urquidez is the perfect opponent to stand up to the martial arts star.

READ:  Soloist in a Cage returns after two years of hiatus, chapter 11 is on MangaPlus!

Unlike the fights of North American cinema, everything in Hong Kong action cinema of the time plays in favor of clarity, fluidity, and dialogue between the fighters. We vindicate an era of martial arts cinema that will not return with one of the most forceful fights in history.