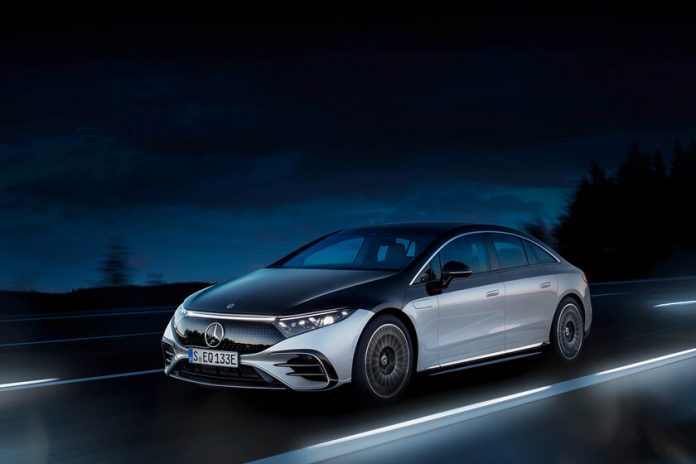 After several months of advance payments, the signature of the star has unveiled today the Mercedes-Benz EQS. This car, 100% electric equivalent of the Mercedes S-Class. And as such it is the brand’s new flagship. Not only is it imposing, luxurious and powerful (up to 760 hp), it also boasts unprecedented technical details, such as the lowest drag coefficient Cx ever for a production car or regenerative braking worthy of a KERS.

The Mercedes-Benz EQS is a limousine format car, measures 5.22 m long by 1.93 m wide and 1.51 m high. For comparison, the Mercedes S-Class is 5.18 m long in the short version and 5.30 m with the long chassis. Of course, it has a wheelbase of more than 3.20 meters, with very short overhangs.

And yet its line seems more fluid than that of the eternal S-Class. What’s more, it seems to be the Vision EQS concept car from the 2019 Frankfurt Motor Show to which they have put some license plates. In profile, it seems that the whole design is summed up in the trace of a single line from the headlights to the lights. In any case, aerodynamic, well Mercedes announces a 0.20 Cx.

All a record that is not only the result of the model line, it is also due to the fairing of the underbody, the closed grille (in the style of the Mercedes EQC), the retractable door handles, the frameless windows or the hood clamshell (which extends to the wheel arches), for example. In fact, the hood can only be opened in the official workshop and the only way to fill in the washer fluid is through a hatch in the left wing. 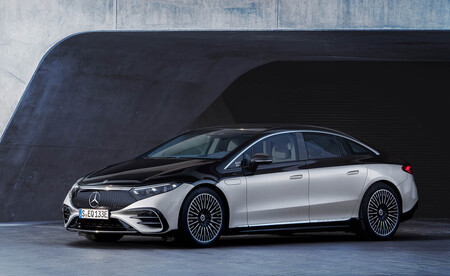 Logically, if the hood can only be opened in the workshop, the front does not have a boot. Even so, it has a 610-liter trunk (60 liters more than those offered by the S-Class) and reaches up to 1,770 liters with the folding rear seats.

One screen per dashboard 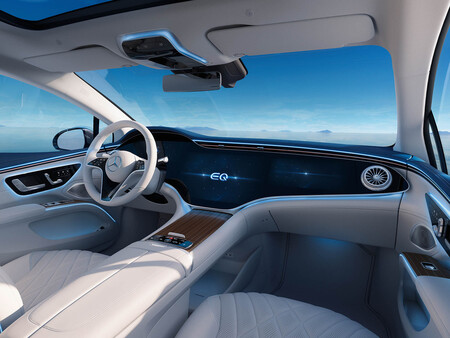 More than the exterior design, it is the interior presentation that will impress customers and passengers the most. With his pantalla XXL size, Mercedes reinvents the dashboard. Well, the screen is the dashboard, there is no dashboard to use. Actually, under a slightly curved glass 1.41 m long we find three digital screens. 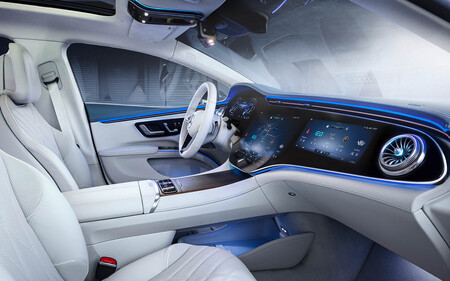 Obviously, there are no physical buttons of any kind, just two round air vents at the ends of the screen. The instrument cluster and front seat display measure 12.3 inches each, while the center dsiplay measures 17.7 inches diagonally. The touch parts have a haptic response, in an attempt to emulate physical buttons. 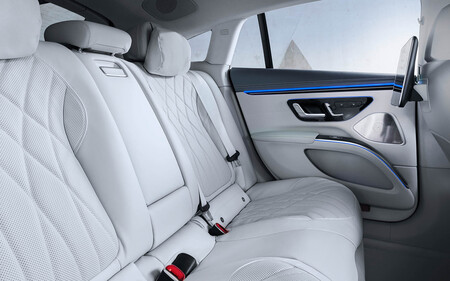 As if that were not enough, the manufacturer proposes a head-up display, whose size projected in front of the driver’s eyes would correspond to that of a 77-inch screen … For those who have not opted for this hyper-screen, the access EQS The range will propose a dashboard similar to that of the S-Class, with a 12.3-inch instrument panel and a 12.8-inch central touch screen on a true dashboard. 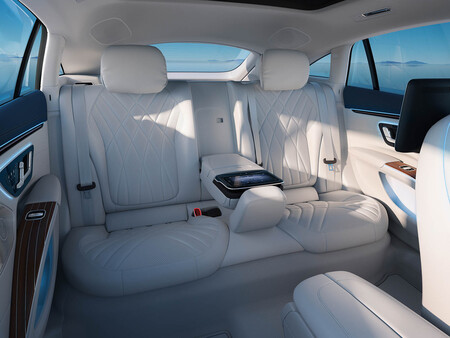 As for the rear passengers, they have up to three touch screens in view: two located on the backrests of the front seats (11.6 inches each) and a tablet. 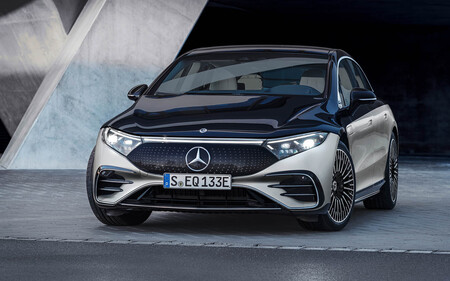 With the EQS, Mercedes introduces a new EVA2 modular platform. It is available in various sizes (the future EQE, which will be smaller, you will be able to use it) and allows the integration of different motors and batteries. The EQS will initially be available in two versions, EQS 450+ and EQS 580 4Matic +.

The EQS 450+ equips single engine electric. It is located on the rear axle and offers 245 kW (333 hp) and 568 Nm of torque. This version will be available, depending on the markets, with two battery capacities: 90 kWh or 107.8 kWh, although it will initially be commercialized only with the 107.8 kWh. In both cases, we speak of useful capacity. 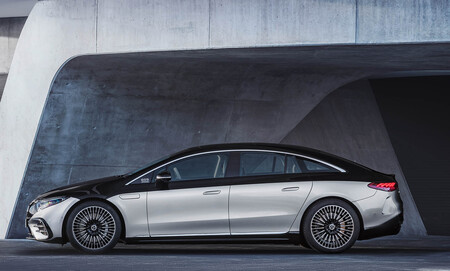 In any case, the motors are of the permanent magnet synchronous type. In terms of performance, the EQS 450+ accelerates from 0 to 100 km / h in 6.2 seconds, while the more powerful EQS 580 only takes 4.3 seconds in the same exercise. The maximum speed is both cases 210 km / h. 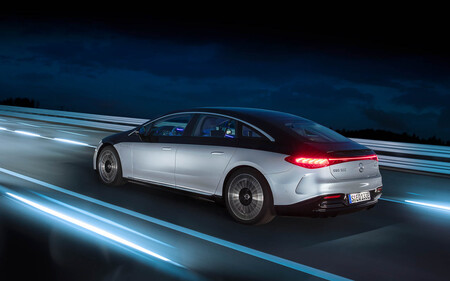 In itself, a 0-100 km / h in less than 5 seconds, for a flagship, is very correct performance. But not enough to generate headlines. Something that Tesla knows how to do very well. Thus, from 2022, there will be an even more powerful and faster version of the 560 kW EQS, that is, 762 hp and developed by AMG.

Regarding the always relevant topic the autonomy of an electric car, Mercedes speaks of a “autonomy of up to 770 kilometers (according to the WLTP cycle) ”, without giving further details. We understand that it is about the autonomy of the EQS 450, the less powerful version, with the 107.8 kWh battery. 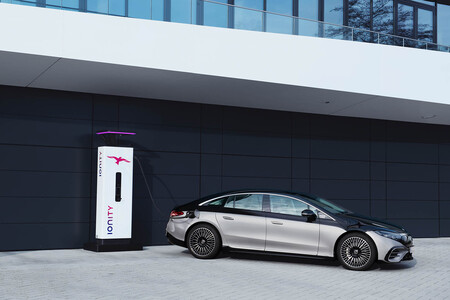 In terms of fast charging, it accepts up to 200 kW and allows going from 10% to 80% of the battery capacity in 30 minutes. Mercedes adds that at stations with fast charging 15 minutes of charging is equivalent to an autonomy gained between 280 and 300 km. 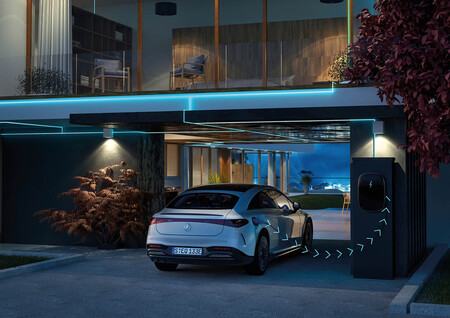 In Japan, the Mercedes EQS will have the option of returning part of its energy to the house or to the electrical grid.

In addition, through the paddles located behind the steering wheel, it is possible to modulate the energy recovery during braking to obtain a maximum of 290 kW, in the 4Matic version (and up to 186 kW with the front engine). With the Eco Assist driving mode, the brake pedal becomes almost anecdotal, they say from Meecedes. It should be noted that the battery power management can be updated remotely.

Open the door alone, park alone … we are getting closer to autonomous driving 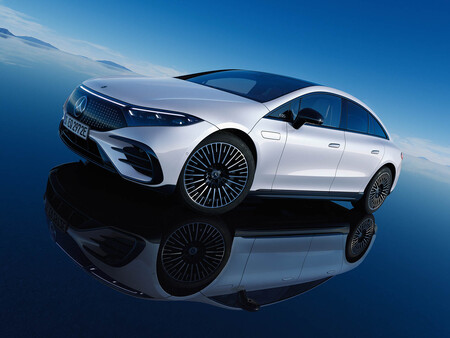 Although the EQS platform is designed specifically for electric models, the suspensions are very similar to those of the S-Class. The car is equipped with the air suspension from the house, which automatically lowers the height of the body by 10 mm above 120 km / h and by another 10 mm above 160 km / h. This suspension can be coupled to the different driving modes offered by the Dynamic Select: Comfort, Sport, Eco, Individual.

In order for this 5.2 m long limousine to be new as a compact saloon, the engineers fitted it with a four-wheel steering. The rear wheels turn at an angle of 4.5 ° (and up to 10 ° as an option, which can be remotely unlocked). It is a system similar to that used in the S-Class. 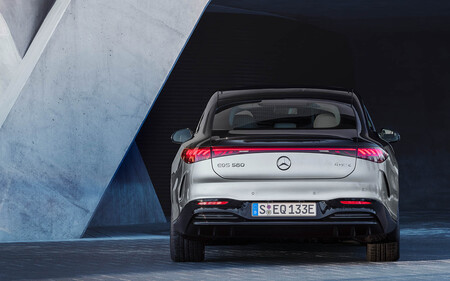 At this level of the range, and with an electric car designed as such from the beginning, the car can be filled with gadgets. Tesla does it and it works for him. And Mercedes was not going to be left behind. For example, the door handles unfold when the driver approaches.

The much cheaper DS 3 Crossback does, too. But, as an option, the EQS adds a functionality: the door can be fully opened automatically. In addition, the electric assistance also allows the door to close effortlessly with a single movement of the hand.

Other available options are the sistema Digital Light, which shows symbols on the road for other users and can also adapt the beam of light according to the slope of the road so as not to illuminate the sky on top of a hill.

As for the “Hey Mercedes” voice assistant, it has been improved and can, on request, explain certain functions or operations (connecting a device via Bluetooth, etc.). But above all, it is now able to recognize the voices of the various occupants, as well as their position on board the car.

As for parking aids, if the car can be parked with a simple mobile phone, it is also prepared to park 100% by itself. The system can be downloaded and activated depending on the legislation of each country. Something that is also available in the Mercedes S-Class, but which currently only works in the P6 car park at Stuttgart airport, the only one adapted for the system at the moment. Automated Valet Parkingof the brand. 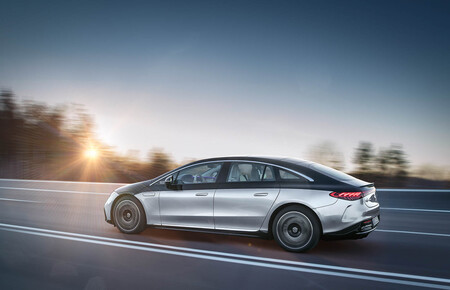 The production of the batteries for the Mercedes EQS has already started, but the production of the first cars will not begin until July. It is scheduled to come out on sale this fall, at a price that should be around 130,000 euros for the 450+ version with the small battery.

In Motorpasión | We tested the Porsche Taycan Turbo S: a beast of an electric car with 761 hp that places us in a new reality