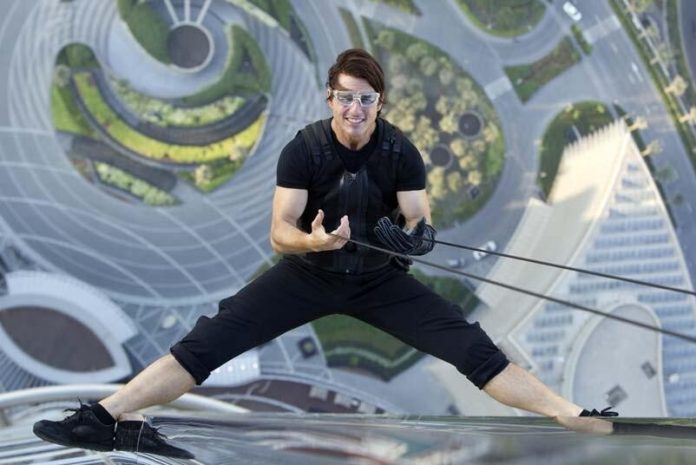 We have seen him climb the tallest skyscraper in the world, take off hanging from the door of an airplane or, among other nonsense, do a HALO jump without disheveled. As his career progresses, and without age seeming to have an effect on him, Tom Cruise is shifting from being considered a mere actor to holding the label of best living special effect.

It is clear that, in addition to being an excellent professional who gives 110% for the business, someone who plays the guy this way over and over again with practically no hesitation – and who continues to raise the bar with every movie that passes – has to have some adrenaline addiction; something that Cruise himself has suggested on a recent episode of ‘The Graham Norton Show’.

In the British Talk Show —which, if you don’t know, I highly recommend both for the level of the guests and for the quality and fun of the interviews—, the interpreter has admitted that, on several occasions, they had to remind him to get into the role and stop smiling while risking life shooting stunts.

READ:  Dragon Ball Super: Broly, this is how the film with Gohan as protagonist would look

“I am a very physical actor and I love shooting them. I study and train and spend a lot of time thinking about how to do them. I have broken a lot of bones! The first time you do any stunt scene is very stressful, but also very stimulating. I have been told some how many times did I stop smiling while shooting them. “

Unfortunately, to see good old Tom smile – or not – on the big screen as spy Ethan Hunt, unfortunately, We will have to wait longer than expected due to the restructuring in the release schedule that they have just carried out at Paramount Pictures, and that affects the releases of both the new installments of ‘Mission: Impossible’ and the long-awaited late sequel to ‘Top Gun’.

Until now, ‘Mission: Impossible 7’ was scheduled to arrive in our cinemas on November 19th of this 2021, but the changes have relocated it to the May 27, 2022. Its spot on Paramount’s 2021 grid will be filled by ‘Top Gun: Maverick’, whose launch should have taken place on July 4.

For its part, ‘Mission: Impossible 8’ jumps from November 2022 to July 7, 2023; a decision probably linked to the impossibility of shooting the last two titles in the series consecutively due to the promotional campaign for ‘Top Gun: Maverick’.