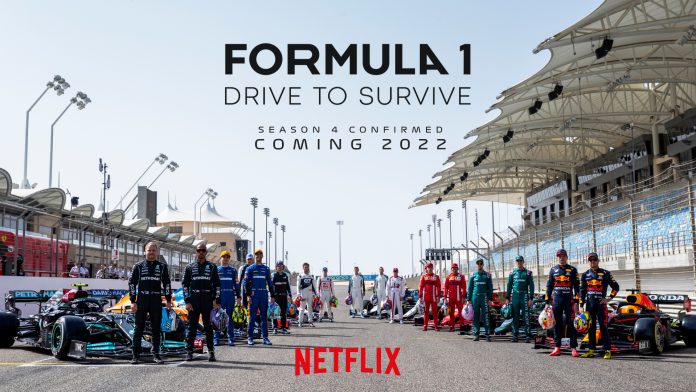 Netflix has recently announced that Drive To Survive season 4 is official. After the finale of the F1 Season in 2021, we were put across the Sport of racing with a new perspective.

We see Max Verstappen claiming a dramatic last lap in the previous season. Honestly, it is weird that the fourth season wasn’t announced sooner, given its effect on the viewers.

Drive to Survive is a sport-based docu-series streaming on Netflix. The show first premiered in March 2018, gaining massive views from fans. It helped to gain spectators for drive racing as well.

It brought about a great response from fans of famous names like Max Verstappen and Lewis Hamilton. This show was a great way to gather a young audience and introduce them to the journey of racing.

So, is there a chance we will find all the hidden elements of Formula 1 in Drive To Survive season 4? Is season 4 even coming back? Let us see.

When is Drive To Survive season 4 releasing?

Back in August 2021, Netflix did give us a hint that a new season was under production. Now, it is confirmed that Netflix is bringing back season four of Drive to survive by mid-2022.

Formula 1 and the streaming platform haven’t given any official release date as of yet. However, from the given timelines of each season, we can figure out that the fourth season will be arriving on screens by the end of summer.

If we compare the timelines of each season, We can see a similarity in release dates and dates of opening of each championship. Season one premiered one week before the season opener in Australia.

Similarly, Season 2 premiered a couple of weeks before, and the third season was released, lining up with the openers in Melbourne as the championship was postponed. Hence, we could expect the show by March probably.

Is there a trailer for Drive To Survive season 4?

As of now, no trailer has been released for the 4th season of Drive to survive. In all honesty, if the show is under production, there is a chance that we might see a trailer soon enough.

However, fans can pretty much imagine what a Drive To Survive trailer would look like. It will probably be a race track and the buzzing sound of speeding cars with superstar racers like Lewis Hamilton and Max Verstappen. Well, now that is a particular reason for fans to wait.

Max Verstappen has unfortunately declined from being a part of Drive To Survive season 4. In an interview, he explained that the show showed a different side of racing to the world, which is ultimately not true.

A few rivalries that were depicted in the show didn’t really exist in real life, which made Verstappen step out. Although the docu-series made a significant impact on the sport, it was quite a disappointment for Max to have to explain the repercussions.