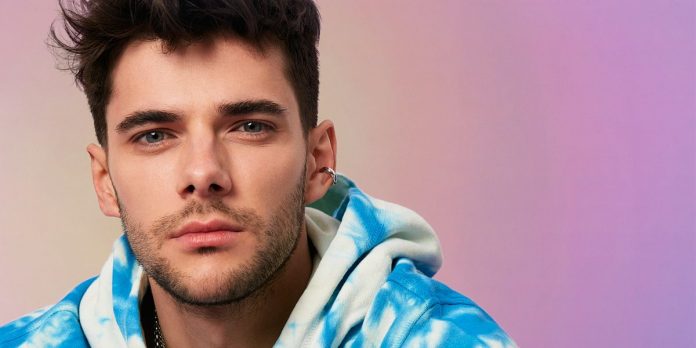 It is very early and Álvaro Rico arrives at the appointment with an unusual energy for these hours. He is willing to give everything. He dares with the most risky ‘looks’, poses like a professional and, while he falls in love with the camera, delights us with his voice. Yes, the actor sings really well, it shows that he comes from a family of musicians. We started the session with Nathy Peluso and Drake in the background, but he soon took out his flamenco streak and asked us to play ‘Volando voy’. With this rhythm, we give him wings to chat about all the projects he is up to: he has just released ‘Alba’ in Atresplayer, he is immersed in the theatrical tour of ‘Dribbling’ and will return soon to ‘El Cid’, on Amazon Prime Video.

Seeing how he moves, we discover that he carries art in his genes, although his initial plan for the future did not include being an actor. “I thought about studying Biology because I love animals. Deep down I think I unconsciously dreamed of dedicating myself to acting, that’s why I took the tests for the Higher School of Dramatic Art (RESAD), although I had enrolled in Advertising and Public Relations to have a ‘Plan B.’ They accepted me and that’s where my life began, “he recalls. His first works were in ‘Medical Center’ and ‘Velvet Collection’, with small papers. Then came ‘Elite’ and his world was blown up. Fiction fans will always remember him for giving life to Polo, but be careful because Jacobo, his new character on television, is not far behind and will also leave his mark.

You play another boy with a kinky touch again …

I’ve thought about it, but I think it’s a matter of chance. In fact, my character in ‘Alba’ and the one I embody in ‘Dribbling’, the play I’m on tour with, are very similar and the latter was not written for me. What I want is to make good characters. I have fun playing dark guys.

The central theme of the series is complex, since it talks about a group rape. How did you stay when you received the script?

When they told me about the project, I did not hesitate. I want to tell stories that are necessary.

Do you think it can change certain dangerous attitudes?

I would not like the weight of changing society to fall on the series because it seems pretentious to me, especially when you talk about such a delicate matter, but if we can create debate and make people reflect after seeing it, I am satisfied.

Have you felt rejection towards the character?
Outside the ‘set’, yes, although I have tried not to judge him. In the end, it’s about getting the job done and when you finish it, you leave it there. However, it is not always easy and sometimes it leaves you touched.

Polo will be remembered as the murderer of ‘Elite’. Can you say something nice about him?

I remember a debate with the creators about its end. We wanted the viewer to be happy when he dies, but also to have a sense of grief and I think we succeeded. I never drew him as a psychopath, he is a boy whose head goes off at a certain point and I think he was not a guy with a bad background.

“I want to tell stories that are necessary”

Your first ‘casting’ was for the role of Guzmán …

Yes, I don’t know if it was a filter or they wanted me to go there. However, time passed and they told me that I would give life to another character who turned out to be Polo.

Álvaro wears a purple blazer with a sash, from Mans.

What do you take from the series?

It has been my school. I had a great time and it was an absolute discovery of the profession. As time passes, and I face other projects, I feel that I am in another position or maturity, as an actor and personally.

Are you nostalgic?
It’s a difficult question because thinking about Polo means going back to ‘Elite’, to being with my teammates, to that bubble, and I remember it as something very beautiful. I miss that part, but I have other interests. The characters will always remain for me, but it’s over. I do not feel melancholy, on the contrary, I think about future projects.

Do you keep in touch with your colleagues?

Yes, with everyone. I speak more with some than with others due to circumstances. In fact, Miguel Bernardeau is my brother in Madrid and I also usually meet Itzan [Escamilla].

Álvaro is wearing a ‘tie-dye’ sweatshirt, by Ice Play, white shorts, by Mango, and ‘Ear cuff’, by Barokah Jewels.

When you left Las Encinas you embarked on ‘El Cid’. What a change!

I decided to enter that project to take a radical turn and I think it was a moment to lower my ego, not to become a protagonist and continue building my career. In the first installment I had a brief intervention, but in the new chapters there will be a development of the character and beautiful and unexpected things will happen.

“I miss a part of ‘Elite’, but I have other interests”

I think you had to learn to ride a horse …

Yes, and also fight. I started shooting ‘El Cid’ when I was still with ‘Elite’. I remember that I was in tow because my classmates gave three classes and I only one. I have had a nice time.

You are now on a theatrical tour with the play ‘Dribbling’. How was the experience?

This is what I am most excited about. Doing theater right now is an absolute privilege. It is magical and transcends beyond the screen. Seeing the capacity full and the people clapping makes you breathe something of normality. I play a soccer player who is accused of rape and I share the stage with Nacho Fresneda. The theater is going back to my origin.

I like that you ask me because it is very personal. Jewel says. It is my mother’s letter and it means jewel. In my town they usually call you that as an affectionate appellation. I got romantic and got the word tattooed as a hallmark. It takes me to my town and my family, specifically my grandmother. It is a tribute to them.

You come from a clan of musicians. Would you jump in?

It is not what I do, but it is my passion and my escape valve. They have proposed things to me and if one day I do something it is because I feel like it, although not as a singer. The good ones pass and I listen to them.

Do you handle the fan phenomenon better?

Before the pandemic, I no longer went to discos, I began to create another kind of life. I am more relaxed and I think that the current situation has been good, although it is curious because there are people who recognize me with the mask.