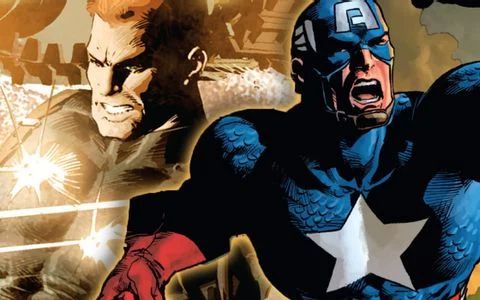 To date Capitan America is one of the most important figures in the Marvel Comics narrative universe, and Steve Rogers has become a true icon of American heroism. However Steve was not the first Super Soldier, and as we know from the numerous published stories he is not the only one to have become one thanks to the studies of Dr. Erskine.

The serum, and its variants, created by Abraham Erskine in fact, they seem to have given birth to a precursor of Captain America, before the latter’s debut in 1941 in the volume created by Joe Simon and Jack Kirby. It is about John Steele, character who appeared in 1940’s Daring Mystery Comics # 1, created by Dean Carr, presented as a soldier with inexplicable superhuman abilities. Steele also made brief appearances in the 2009 Marvel Project series, and in Secret Avengers released the following year.

A retcon then changed its origins, tracing it back to before its 1940 debut, and a somewhat intricate story was created. Steele participated in the American Civil War as a soldier sent for spy on the Confederate soldiers commanded by Aloysius Thorndrake. Steele managed to escape after being discovered, finding himself in Vanishing Point, a limbo between space and time, where he encountered an ancient entity called the Abyss. This creature, coming into contact with Steele, gave him one incredible strength, very similar if not even greater than that of Cap, an almost infinite stamina and a faster regenerative factor than normal.

READ:  Helen McCrory dies: the beloved actress of the 'Harry Potter' saga or the 'Peaky Blinders' series was 52 years old

After helping a spy, named Marie Antoinette, escape from enemy forces, Steele was captured and put into stasis. Moving to Germany, Steele’s body was studied directly by Dr. Erskine, who placed it at the center of the experiment called Project: Nietzsche, clear reference to the superman of the philosopher. After numerous vicissitudes, Steele, awakened, resumed his battle against the Nazis and the plans of Red Skull.

Later captured by Thorndrake’s men, Steele was heavily brainwashed, and later joined the Shadow Council. Fortunately Steve was able to help John by reversing the effects of the brainwashing and thus obtaining a new ally. However, Steele will die on a mission in Bagalia, however he is remembered as the first Super Soldier in the service of the USA

We remind you that the new series has introduced Captain Fischer, the first LGBTQ + captain, and we leave you to the announcement of the miniseries The United States of Captain America.

READ:  Naruto: Birthday date of each hero in the anime