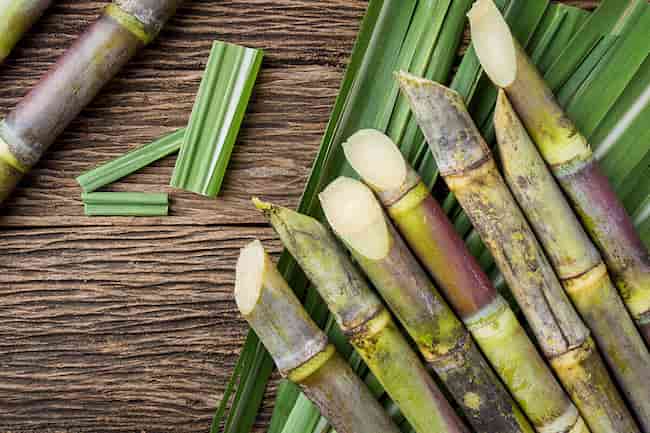 Sugar cane is a good source of calcium, potassium, iron, zinc, copper, and magnesium which are beneficial for our bodies. Now it’s not just a drink item but also a healthy ingredient for many dishes.

Sugar cane is not only used as a food, but it also has several uses such as products made from sugar can e-fertilizer, soap, and liquor.

Procedure to extract juice from sugar cane: Before extracting the juice, the leaves and the skin of a sugar cane are removed. Then, it is cut into pieces or crushed to extract its juice.

1) The sugarcane is crushed in units called “mills” in order to extract its juice by adding water.

2) The pulp obtained in the first milling contains fiber which is known as “bagasse”. This is used for fuel in sugarcane factories. The second milling extracts the juice by adding more water to the crushed sugar cane.

3) In third and final milling, a small quantity of water is added In order to extract the juices that remain trapped in the fibers of the sugar cane. It is then boiled to evaporate the water and concentrate the juice.

4) As it is boiled, foam forms on top made from impurities from inside the cane which is removed from time to time with a skimmer.

5) When evaporation of the juice reduces until almost half of the original volume, it becomes dark and viscous and sugar crystals start forming inside the liquid which is known as “massecuite”.

6) The massecuite is transferred to a filter cloth and pressed in order to separate its juice.

7) After removing the impurities, the juice is boiled again until it reaches the required levels of concentration by evaporation.

8) The final product contains about 80 percent sucrose, which is ready for conversion into crystals.

9) Then it is transferred to a centrifuge that spins rapidly to remove the excess water from the solution.

10) It is cooled or left at normal temperature until sugar crystals or “white gold” as it’s referred to in some parts of the world, start forming as crystals at the bottom and sides of the container.

11) The crystals are then separated from the remaining liquid known as “mother liquor” using a centrifuge.

12) Further purification may be carried out by heating and evaporating most of this mother liquor to concentrate impurities such as molasses. This is then used for the production of alcohol that is widely used in the perfumed, cosmetic, and pharmaceutical industries.

13) The crystals are then transported to a dryer where they are spread out on large trays in order to remove any remaining water content.

14) Finally, it is packed into bags or boxes ready to be sold. It is then transferred to the buyer in order to produce sugar.

15) sugar cane juice can be also used for ‘Sugarcane Rum’, which is a popular distilled alcoholic drink made from sugarcane.

READ:  What Are The Reasons For Feeling Tired and Exhausted?

Note: Sugar cane juice can be used in food items such as candy, cakes, and beverages instead of white refined sugar.

It is a good source of minerals, vitamins, and enzymes which are beneficial for our health. Sugar cane juice is easier to digest than sugar because it contains many nutrients and enzymes that help in the digestion process. Sugar cane has been used as a folk medicine for thousands of years to treat digestive problems such as indigestion, heartburn, and diarrhea.

Sugar cane juice is a very good energy drink because it contains about 15 times more potassium than other sports drinks.

It is rich in antioxidants which help prevent cancer and has other health benefits such as improving the immune system, strengthening bones, reducing blood pressure, controlling diabetes, protecting the liver from damage, and promoting weight loss.

Sugarcane juice contains polyphenolics that have been found to play an important role in preventing cardiovascular diseases such as coronary heart disease and atherosclerosis. It also helps prevent strokes which are one of the leading causes of death worldwide.

Sugarcane is a hardy plant and is able to grow in diverse climates but it has some disadvantages such as:

First of all, the cultivation of sugarcane requires high input costs because it needs strong sunlight exposure for most of its life cycle; also, soil quality and availability are very important to grow good sugarcane.

Sugarcane is able to have a deep root system which makes it possible for the plant to extract most of the nutrients needed for its growth from the subsoil, thus leaving most of the land infertile which also has negative effects on crop rotation cycles.

3. Environmental factors such as drought, wind, and floods:

Sugarcane is able to survive in harsh conditions; however, it needs a large amount of water throughout its life cycle and excessive rains or droughts affect the yields and quality of sugarcane drastically. Also, strong winds can damage the plants and if there are floods, sugarcane can be easily washed away.

4. Prone to diseases and pest infestations:

All plants are prone to diseases or pests but sugarcane is especially vulnerable because it is grown in large quantities with other types of crops that are also susceptible to the same type of disease or insect attacks; this makes it difficult to control and this has a negative effect on the quality of sugarcane.

5. High requirements for fertilizers and pesticides:

Sugarcane is very susceptible to diseases or insect infestations because it has a vast root system which makes it easy for the insects to spread, so chemicals such as fertilizers and pesticides are needed in large quantities. In certain cases, it is necessary to use chemicals that are banned in other countries because of the environmental damage they cause; this has a negative effect on human health and workers in the fields.

READ:  Benefits of Kokum Butter and Use for Dry Skin

Since sugarcane is manually harvested by cutting with machetes or hand-held shears, labor costs are high because of the time they take to harvest and many workers are needed. Also, it is necessary to have a large workforce to cut sugarcane during its growing cycle.

Sugarcane plantations have a harmful effect on people’s health because they use large quantities of chemicals such as fertilizers and pesticides, which can spread into the air and contaminate water sources. Also, many chemicals are banned in other countries but they are used here to increase profits for companies.

Sugarcane plantations have a negative impact on biodiversity because they provide fewer habitats for native species of plants and animals; this is caused by deforestation and when sugarcane is burned, smog covers the air.

Sugarcane is used as biomass because it can be burned and turned into electricity, so this reduces the use of fossil fuels and the effects of climate change to a certain degree. Also, sugarcane has high energy density and low carbon emissions, so sugarcane is considered one of the most important sources of biomass.

Sugarcane is also used to produce bioethanol, which is a fuel that has low carbon emissions and can be used in cars without any modifications; this makes it an ideal source of energy.

Since it takes at least six months for sugarcane to mature, it is often used as cattle feed for livestock.

Sugarcane has many uses in the manufacturing industry because of its versatility; sugarcane can be used to make paper, plastics, textiles, insecticides, and alcohol.

Many people consume sugarcane in the form of sugar or molasses because it is a sweetener that has many health benefits. It also cannot be stored for long periods of time, so sugar production is a seasonal process.

Sugarcane contains antioxidants that can reduce the effects of free radicals, so it has an anti-inflammatory effect on the skin; this is very beneficial in reducing acne and blemishes because these are caused by inflammation of the sebaceous glands. Also, sugarcane exfoliates dead skin cells and unclogs pores, which can reduce the appearance of acne.

Sugarcane has antibacterial and antifungal properties that can prevent bacterial infection; these components actually make it a useful weapon against harmful pathogens such as fungi, yeast, and staphylococcus aureus.

Since sugarcane is very rich in water, it has the ability to moisturize dry and chapped skin; this keeps the skin supple and soft while preventing wrinkles caused by excessive dryness. Also, having a lot of moisture plumps up your skin pores and reduces fine lines like those around the lips.

Sugarcane can prevent early signs of aging because it contains mineral salts and potash, which are responsible for reversing the cellular damage in the skin caused by free radicals; this also inhibits collagen breakdown and reduces wrinkles.

Sugarcane juice has the ability to moisturize your skin because it restores water levels in the epidermis; this prevents further damage and recurrence of dry flaky patches on your face. Also, you can use sugarcane as a gentle exfoliant that will remove dead skin cells and dirt from your face.

Since sugarcane contains vitamin A, it can also promote the production of keratin in your scalp; this is a type of protein that keeps your hair healthy by strengthening its structure and preventing breakage.

Sugarcane juice is rich in mineral salts; these components help restore the pH balance in your scalp and protect your hair from damage caused by free radicals. Also, it can prevent premature greying and balding because sugarcane juice stimulates blood circulation to the scalp and prevents water loss through the roots of your hair.

Sugarcane juice can reduce the presence of bacteria and fungi that cause itching and flaking; this is why it is a popular folk remedy for treating flakes on your scalp. Also, sugarcane has antioxidant properties that inhibit collagen breakdown in your hair follicles; this is responsible for reversing the signs of aging and preventing hair loss.

Sugarcane is composed of many components that help kill germs and reduce the production of acid; this reduces the chance of tooth decay because it prevents bacterial growth in your mouth. Also, since sugarcane contains fluoride, it helps strengthen the enamel of your teeth and protects them from damage caused by free radicals and acids.

Bad breath is usually caused by certain bacterias that produce noxious compounds; sugarcane has antibacterial components that can help reduce the production of these bacteria and give you fresher breath.

Since sugarcane juice is a natural scrub, it can remove stains and other signs of aging from your teeth; this will make them look whiter and more brilliant. Also, sugarcane has components that inhibit collagen breakdown which is responsible for eliminating the appearance of fine lines, wrinkles, and age spots from your face.