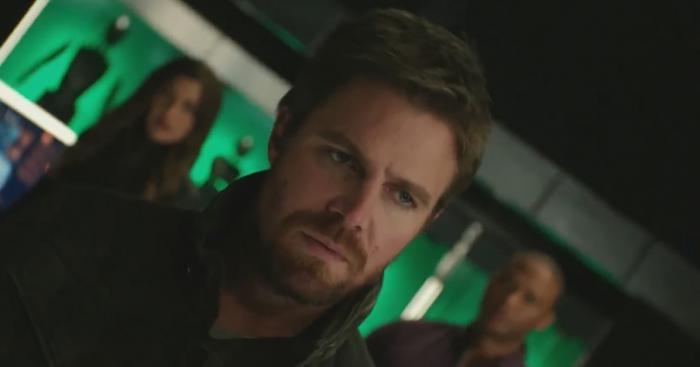 The CW chain advances the next week's episode of "Arrow" titled “Present Tense”, the fourth episode of the eighth and last season of the series, with a promo that reveals why Oliver Queen and Team Arrow seemed so perplexed in those images that were revealed the other day of the episode, because we would already know who are the members of that meeting,

This next episode links with what was seen in the episode aired last night, “Leap of Faith”, where (SPOILER: select the text to see it) Mia, William and Connor are somehow taken to 2019 where they meet face to face with Oliver and Team Arrow; but they don't seem to be the only visitors of the future (FIN SPOILER). The promo that we discuss below advances the arrival of a new deathstroke (which seem to be (SPOILER: select the text to see it) the 2040 Deathstrokes (FIN SPOILER)).

ECHO KELLUM STAR INVITED – When a mysterious new Deathstroke appears in Star City, Oliver (Stephen Amell) and Team Arrow insist on ending this villain themselves. Meanwhile, reeling from the loss of one of their own, the future Team Arrow finds a new way to try to stop JJ.

Kristin Windell directed the episode written by Oscar Balderrama and Jeane Wong, and it will air on Tuesday, November 5.

The Amazing Spiderman, no. 13

Now that Meghan Markle and Prince Harry are going to lose Sussex Royal aka their "brand" on social media what's going on?

Pumas UNAM gets all three points at home after passing over Atlas Guadalajara (5-1)
'Game of Thrones': HBO cancels the prequel starring Naomi Watts after spending ten million dollars on the pilot
Comment