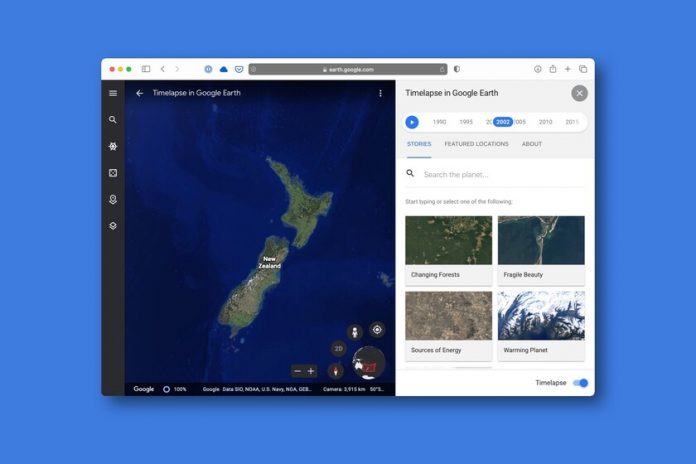 In the last few hours, Google has updated its satellite imagery service, Google Earth, with which it says is the biggest update since 2017. Now it incorporates a new functionality of timelapse what have they gathered for more than 24 million satellite images collected over the last 37 years.

The new feature allows us to see Earth from another perspective, one that shows us the changes it has undergone by natural or human actions. Through specific locations around the world we can see year after year how they have changed.

Collecting this data, however, has not been an easy task. We are essentially facing a timelapse of the entire planet. For this, Google collected more than 24 million images thanks to collaborations with NASA, National Geographic or the European Union, among others. They say it took over two million hours of processing on thousands of Google Cloud servers to compile all 20 petabytes of data. According to Google, Timelapse on Google Earth is the largest video on the planet.

READ:  What we know about the strategy of mixing doses of COVID-19 vaccines and how other countries are managing it

The planet over the years

The changes that we can observe on the planet using Google Earth Timelapse are curious. There are different themes, such as lurbanization, deforestation or global warming. From Google Earth it is possible to access the tool to either search for specific points in the world or choose some of the recommended ones.

Likewise, Google has made available to users hundreds of videos on YouTube where these timelapses are collected from different locations on Earth. There is also a dedicated website to download the videos and use them for informational purposes.

Finally, there are five guided views that Google created in association with the CREATE Lab at Carnegie Mellon University. These views focus on five of the most shocking issues affecting the planet today: deforestation, global warming, energy sources, urbanization, and what Google calls “fragile beauty.”

Google plans update Timelapse with new images every year for the next decade. As they indicate, Timelapse allows “to evaluate the health and well-being of our only home, and is a tool that can educate and inspire action.”

READ:  Sony updates the PlayStation 5: it is now possible to play in 4K at 120 Hz on Samsung Smart TVs