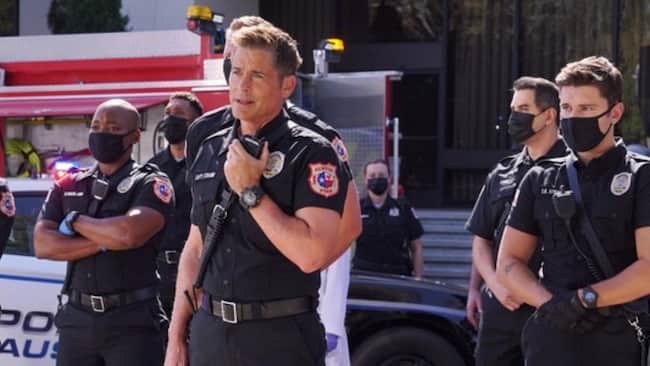 9-1-1 Lone star season 3 is a cross-genre type of television series created by Ryan Murphy, Brad Falchuk, and Tim Minear for Fox. The story revolves around the Fire, Police, and Ambulance departments of a fictional company, Located in Austin, Texas.

The name Lone Star is related to Texas “The Lone Star State”, and it premiered on 19 January 2020, and its 2nd season premiered on 18 Jan 2021. Now various questions about season3 of this series are asked by the audience, and we will give you every answer in this article; please read the full article carefully.

We are expected to see an exciting season and hope to attract new audiences. We can expect the Red vs Blue rivalry between the cops and firefighters. There is a softball game between Austin FD and Austin PD.

We can also expect the comeback of Gwyn Morgan and Tim rosewater at least for one episode. One storyline that we expect is the shutdown of 126, and there is an ice storm in the city, and how 126 will rescue the city and reunite 126 again. It’s exciting to watch.

As the first episode of season3 has already been released, we see an unexpected ice storm and various weather emergencies come to Austin, and Owens deal with the fallout of the 126 closings and settle into some other jobs. Also, we see Judd and Grace prepare for their first baby.

READ:  When will ‘Better Call Saul’ Season 6 be on Netflix?

It is also clear what will happen in the second episode of Lone Star Season3. There is a continuous ice storm in every city, and it causes so much loss between all this. Gillian race is successful in rescuing a young boy who has fallen into a frozen pond.

Lone Star season3 will be announced on May 17, 2021, and production will begin in September 2021 and start premiering from 3rd January 2022.

READ:  Jojo: the brilliant LowCost is back with a cosplay dedicated to Josuke Higashikata

Is it suitable for kids?

There is no age restriction, and also there are no adult sections, but there are fights and destruction by nature. It’s mainly suitable for more than 14 years of the audience who can easily understand the story.

What happened to Captain Vega Husband?

The episode ended with Captain Vega returning home and finding her husband bleeding from one eye. It is soon revealed that he had a severe disease called an aneurysm that they could not detect; he passed away.

How can we see it in India?

Originally, it was premiered by Fox network, and it will premier on both television and online platforms, and you can watch it according to your free time.

If you want to see it online, you will see the latest episodes on the official episode of the Fox network or Hulu apk; if you are from India, you can watch it on Disney+Hotstar.

What message does the series want to give?

Series Lone star will give a social message to its audience about our Police, Ambulance and Fireworks. In the series, their life is described and shows how many difficulties they faced during their duty, but they always take their duty as their priority and never run away from it.

They do a lot of hard work and put their life at risk for our safety, and they deserve more respect than any other profession.

Lone star season 3 is the 3rd season of Lone star, which is a television series based on the life of Fireworks, Police, and Ambulance. It is about a company 126 which provides all those services, and we get to know about their problems in the episodes.

We also get how many difficulties come in the life of these social workers who work hard for our lives.

The Lone star will give a social message to its audience about our Police, Ambulance and Fireworks. In the series, their life is described and shows how many difficulties they faced during their duty, but they always take their duty as their priority and never run away from it.

They do a lot of hard work and put their life at risk for our safety, and they deserve more respect than any other profession.

The series has various good reviews and has two hit seasons, and the audience who watch two seasons also waits for the third season. So based on two seasons, we would expect one more hit season of the series.

Season 3 of 9-1-1 will start premiering from 3-1-2022, and you will enjoy it on Hulu, the official website of Fox network and Disney+Hotstar. Give your precious reviews in the comment box after enjoying the series.